This week AIPAC’s executive director, Howard Kohr ordered his staff to cancel their summer vacations in response to the Iran Deal which has been welcomed by the International community except for Israel.

On Monday, the U.N. Security Council is scheduled to vote on a resolution circulated to council members Wednesday by the United States endorsing the Iran nuclear deal .

The resolution will make the Iran nuclear deal international law, but will delay its official implementation for 90 days, to allow for the U.S. Congress’ consideration.

A U.S. official told CBS News that American law doesn’t “trump” U.N. resolutions, but if Congress were to vote against the measure, U.S. sanctions would not be lifted and Iran would probably not comply, making the resolution moot. It would however, remain in effect, potentially allowing other nations to lift their sanctions and resume trade, assuming Iran continued with the agreement

AIPAC sources admitted, “We are undertaking a major and significant effort to urge Congress to oppose the deal and insist on a better agreement.” 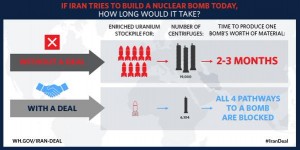 Twenty-eight Jewish lawmakers in the U.S. House and Senate are now on the front-line in the battle between AIPAC and the Obama administration’s support of the Iran-G5+1 Agreement.

When Johnson became president, he made an agreement with Israel that two senators would come every year to inspect.

Before the senators would visit, the Israelis would build a wall to block the underground elevators and stairways.

From 1963 to ’69, the senators came, but they never knew about the wall that hid the rest of the Dimona from them.

In “Foreign Agents: The American Israel Public Affairs Committee from the 1963 Fulbright Hearings to the 2005 Espionage Scandal” by Grant F. Smith, details how America’s Middle East policy has been formulated and thrives due to the dearth of relevant reporting on AIPAC’s activities.

The lax enforcement of The Logan Act, The Foreign Agents Registration Act/FARA, the 1917 Espionage Act, Thompson Memorandum guidelines for prosecuting corporate crime coupled with the fear of being labeled anti-Semitic and a media who have failed at their commission to seek and report the truth have all colluded to exert an undue influence over Congress and thus; we the people of America to be “under the de facto influence of a powerful foreign interest.” [2]

Smith documents how AIPAC-a constellation of individuals and organizations that make up the “Israel lobby” –and which I define as a Zionist Lobby-continues to actively steer USA foreign policy in a militant and pro-Israel only direction beginning when ‘civilized’ men in the United Nations partitioned Palestine in 1947 after the British Mandate ended.

Senator Fulbright asked questions regarding Jewish-Agency-funded US foreign agents who did not register with the Justice Department or disclose their true financing, funding flows or covert activities.

Senator Fulbright expressed great concern over the activities of unregistered foreign agents who worked to influence public opinion and policy which resulted in the 1963 Senate Foreign Relations Committee hearings which investigated and uncovered a “conduit” operation run by the American Zionist Council, which in 1959 was renamed AIPAC.

Within eight years, the American Zionist Council had received over a half a million “from the Jewish Agency to create a favorable opinion in this country for Israeli government policies. The Senate investigation closed down the conduit, but the extensive propaganda activities still go on…[and] by 1998, “US aid to Israel exceeded $3 billion a year, the highest amount of US aid given to any country.” [3]

“AIPAC’s illegal tactics harm America…[and] corporate crime inflicts far more damage on society than all street crime combined…Harvard economist Thomas Stauffer estimated the total cost of [the] prolonged conflict in the Middle East at $3 trillion [in 2002 USA dollars and he] lays a good deal of the blame for this at the doorstep of AIPAC.” [4]

It has been written that the root of all evil is the love of money, and most nefarious is the consequences of nearly two-trillion American tax dollars which have reaped “special trade advantages, and preferential contracts. U.S. aid to Israel cost some 275,000 American jobs each year.

“Additional known items include loan guarantees-which the U.S. most probably will be forced to cover-special contracts for Israeli firms, legal and illegal transfers of marketable U.S. military technology, de facto exemption from U.S. trade protection provisions, and discounted sales or free transfers of U.S. military equipment…net purchases by U.S. parties of Israel Bonds, adds at least $40 billion to the total.

“U.S. jobs and exports have been affected, adding to costs and losses. As U.S. relations with Mid East countries deteriorated, trade was lost. Worsening political relations resulted in the loss of hundreds of thousands of U.S. jobs thanks to the Israel lobby.” [5]

Smith also documents how money laundering of over 50 billion US dollars to “charitable” organizations and massive covert activities has enabled the ongoing building of the illegal and apartheid Israeli settlements which have expropriated legally owned Palestinian land.

On November 21, 2005, top U.S. law enforcement officials attended a briefing organized by the Council for the National Interest regarding:

Charities such as B’nai B’rith and Hadassah that are in direct control of the World Zionist Organization and directly linked to a massive money-laundering operation, the settlements as a generator of terrorism against the United States, and as Israel has never signed the Nuclear Non-Proliferation treaty and America has; the U.S. is prohibited from assisting Israel or any country trafficking in nuclear enrichment equipment or technology outside of international safeguards.”

In 1976, the Symington Amendment was adopted to fortify and extend the Nuclear Non-Proliferation Treaty. It prohibited US assistance to any country trafficking in nuclear enrichment equipment or technology outside of international safeguards.

The World was made aware of Israel’s clandestine nuclear weapons development thanks to Vanunu’s 1985 photos from Top secret locations withing the underground facility but due to the influence of AIPAC, Israel’ s nuclear stockpile and launch capabilities are ignored due to “business as usual in Washington: criminal wrongdoing continues to corrupt America’s core values, rule of law, and Middle East policy, as the Israel lobby’s crosshairs shift almost completely to Iran.” [6]

For decades U.S. foreign policy and defense experts opposed even supporting the creation of Israel and AIPAC  has “worked underground secretly and illegally throughout its history.” 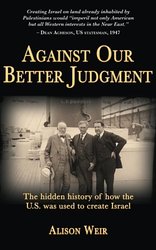 In  “Against Our Better Judgment: The hidden history of how the United States was used to create Israel”, Alison Weir documents how decades of Zionist propaganda reaped massive funding and diplomatic support for Israel to “sustain the forcibly established state and provided a blank check for its aggressive expansions.”

Weir reports how beginning in the early 20th century, the roots of political Zionism in America took hold and spread as a movement “through education and infection.”

A Jewish non-Zionist labeled the movement as “foreign, un-American, racist and separatist phenomenon”.

In 1939, Ben Gurion said he was “convinced that the main arena for Zionists efforts outside of Palestine was America.”

That same year, under the leadership of Rabbi Hillel Silver, the American Zionist Emergency Council/AZEC and the United Jewish Appeal/UJA were created.

By 1948, the UJA had raised four times more than what Americans contributed to the Red Cross.

Both launched political and public relations offensives to capture the support of congress, clergy, editors, educators and labor leaders.

AZEC activists made direct contact with US reps and Senators and went “after union members, wives and parents of servicemen and Jewish veterans.”

They rallied against anti-Zionist lecture tours to shut them down before they occurred or turned out to disrupt them.

In its 48th Annual Report the Zionist Organization of America proudly noted the “immensity of our operations and their diversity” which reaches “into every department of American life.”

Of particular interest to American Christians should be AZEC’s manipulation of clergy to support the “Christian Council on Palestine” [3,000 members by the end of WW II] and the “American Palestine Committee” [6,500].

The groups proclaimed “the tragic plight of [Jewish] refugees fleeing from persecution and finding no home” and good Americans were manipulated to favor the Zionist agenda through a Jewish refugee problem.

Weir quotes an American Christian Biblical scholar who spoke of a friend who had been living in Jerusalem who was told, “When we get control you can take your dead Christ and go home.”

Of interest to ALL Americans should be the details Weir provides regarding U.S. State Department officials who opposed the creation of Israel because it “would imperil U.S. interests and violate democratic principles.”

President Truman’s State Department also warned that America would loose moral prestige for betraying “the high principles which we ourselves have enunciated during the period of the [Second World] War.”

The Zionist agenda pushed the UN Partition Plan despite State Department warnings that its implementation “would guarantee that the Palestinian problem would be permanent and still more complicated in the future.”

The Israeli nuclear weapons development program was carried out in coordination with South Africa and the bombs were detonated in a deserted Island of that country when the apartheid regime was still prevailing in that African nation.

At his arrival to the South Africa’s presidency, one of the first decisions of the late South African leader Nelson Mandela was to relinquish to the possession of those weapons of mass destruction.

Responding to Netanyahu and The New York Times Re: Vanunu, Israel’s WMD and Occupation Palestine

ISIS Will Make its Own Currency, in Gold Ali Younes

Save the Children urges end to Gaza blockade Activism