On Saturday Prime Minister Benjamin Netanyahu called U.S. Secretary of State John Kerry to thank the U.S. for blocking a decision that would task the UN secretary general with convening an international conference on making the Middle East a nuclear weapons-free zone by March 2016.

U.S. Under Secretary of State Rose Gottemoeller announced there was “no agreement” and accused some countries of undermining the negotiations at the 2015 NPT Review Conference.

Gottemoeller did not say which nations had tried to “cynically manipulate” the conference, though she accused Egypt and other Arab states of bringing “unrealistic and unworkable conditions” to the negotiations.

A senior Western diplomat was more blunt: “Egypt wrecked the conference. … Egypt overshot the runway and has prevented the region from moving closer to a region free of (weapons of mass destruction).”

On 2 October 2009, The Washington Times reported that Obama agreed to keep Israel’s nukes ‘secret’ and reaffirmed a 4-decade-old understanding that has allowed Israel to keep a nuclear arsenal without opening it to international inspections.”

This nuclear deception was reached at a summit between President Nixon and Israeli Prime Minister Golda Meir on 25 September 1969.

Researcher and author Avner Cohen reported that the accord amounted to “the United States passively accepting Israel’s nuclear weapons status as long as Israel does not unveil publicly its capability or test a weapon.”

Nuclear weapons are not just morally indefensible they are economically unsustainable.

America is one of the five nuclear powers that signed the NPT and thus is obligated to abolish its nuclear weapons-but the USA has been in violation ever since the day America signed the NPT!

The NPT/Nuclear Non-Proliferation Treaty, was created in 1968, and maintains that nuclear weapons proliferation can only be curtailed if nuclear countries move toward disarmament and the five nuclear powers that signed the NPT must abolish their nuclear weapons.

In 1966, at the height of the Cold War, the US nuclear arsenal was estimated at over 32,000 warheads. Current estimates range between 5,000 to 12,000; but even one is more than enough to destroy Creation as we now know it.

IF that day we call 9/11 taught us anything, it should be that America’s nuclear arsenal cannot defeat ‘terrorism’ or provide security from the actions of a few violent mad men who target and murder innocent people.

American money is imprinted with “IN GOD WE TRUST” but yet the U.S. maintains a nuclear arsenal of nearly 2,000 on hair-trigger alert ever since the end of the Cold War.

The Orwellian named Life Extension Program will extend the life of every one of America’s weapons of mass destruction for three decades or more as well as undermine sound national security by introducing major changes to existing nuclear weapons stockpile that had been extensively tested.

On 8 July 1996, the International Court of Justice issued this statement:

“The destructive power of nuclear weapons cannot be contained in either space or time. They have the potential to destroy all civilization and the entire ecosystem of the planet.”

States have obligations.  People have rights.

The greatest enemy of humanity may well be all things Nuclear and “We have seen the enemy and he is US.”-Pogo 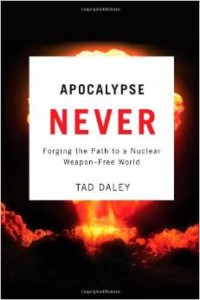 In “APOCALYSE NEVER”, Tad Daley nails America’s hypocrisy and illuminates the status quo of Nuclear Apartheid: “For decades, the United States has said to other countries, ‘We can have them, but you can’t.'” [Page 18.]

The US also colludes in Israel’s nuclear deceptions and nuclear apartheid.

Dr. Avner Cohen, author of “The Worst-Kept Secret: Israel’s Bargain with the Bomb”, is an Israeli-born expert in Israel’s nuclear policy of deception-which is spun as ‘Ambiguity.’
In an interview with Haaretz, Cohen spoke about a late-1969 meeting between Golda Meir and Nixon:

The United States and most of the Western world agreed to accept Israel’s special nuclear status.

In other words, Israel did not join the Non-Proliferation Treaty, but it received special status, and pressure was not exerted on it with regard to this topic.

Ambiguity is the Israeli-American policy. Without the West’s agreement, there would be no ambiguity.

The bitter irony is that right now, ambiguity serves the interests of Israel’s rival in the Middle East. Iran is creating its own version of ambiguity: not the concealment of its project, but rather ambiguity with regard to the distinction separating possession and non-possession of nuclear weapons. It reiterates that it has no intention of building a bomb, but that it has the right to enrich uranium, and even come close to developing [nuclear] weapons – while still remaining true to the nuclear Non-Proliferation Treaty. It is straddling the line, and in my opinion, Iran wants to, and can, remain for some time with the status of a state that might or might not have the bomb. Iran is a state of ambiguity.”

In 2007, the Nixon library declassified a 19 July 1969, memo from Henry Kissinger, the then national security adviser stating: “While we might ideally like to halt actual Israeli possession, what we really want at a minimum may be just to keep Israeli possession from becoming an established international fact.”

The “established international facts” were exposed in 1986, when Mordechai Vanunu told the truth and provided the photographic proof of Israel’s seven story underground WMD Facility freely streaming at You Tube:

Another established international fact occurred on 17 April 2010, when Iran hosted a conference in Tehran on nuclear disarmament with sixty countries represented.

If America’s claims of fighting the proliferation of nuclear weapons were not false, would the Zionist regime be able to turn the occupied Palestinian lands into an arsenal where a huge number of nuclear weapons are stored while refusing to respect international regulations in this regard, especially the NPT?

There is only one government that has committed a nuclear crime so far.

Only the government of the United States of America has attacked the oppressed people of Hiroshima and Nagasaki with atomic bombs in an unfair and inhumane war using or even threatening to use such weapons is a serious violation of the most basic rules of philanthropy and is a clear manifestation of war crimes.

The greatest violators of the NPT are the powers who have reneged on their obligation to dispose of nuclear weapons mentioned in Article 6 of the Non-Proliferation Treaty. These powers have even surpassed other countries with respect to promoting nuclear weapons in the world.

By providing the Zionist regime with nuclear weapons and supporting its policies, these powers play a direct role in promoting nuclear weapons which is against the obligations they have undertaken according to Article 1 of the NPT.

We believe that besides nuclear weapons, other types of weapons of mass destruction such as chemical and biological weapons also pose a serious threat to humanity.

The Iranian nation, which is itself a victim of chemical weapons, feels more than any other nation the danger that is caused by the production and stockpiling of such weapons and is prepared to make use of all its facilities to counter such threats.

We consider the use of such weapons as haram (religiously forbidden) and believe that it is everyone’s duty to make efforts to secure humanity against this great disaster.

On 5 April 2009, President Obama stood on the world stage in Prague and admitted:

As the only nuclear power to have used a nuclear weapon, the United States has a moral responsibility to act. When we fail to pursue peace, then it stays forever beyond our grasp. We know the path when we choose fear over hope. To denounce or shrug off a call for cooperation is an easy but also cowardly thing to do. That’s how wars begin. That’s where human progress ends.

The voices of peace and progress must be raised together.

Human destiny will be what we make of it.

Words must mean something.

Author Tad Daley has responded with a resounding NO in “APOCALYSE NEVER: Forging the Path to a Nuclear Weapon-Free World”

Apocalypse Never maintains that the abolition of nuclear weapons is both essential and achievable, and reveals in fine detail what we need to do–both governments and movements–to make it a reality.

In jargon-free language, Daley explores the possible verification measures, enforcement mechanisms, and governance structures of a nuclear weapon–free world. Most importantly, he decisively argues that universal nuclear disarmament is something we can transform from a utopian fantasy into a concrete political goal.

Daly calls “to turn every single nuclear sword, everywhere on earth, into the plowshares of peace that the prophet Isaiah envisioned for us so many long centuries ago. The matter is in our hands. The sword is in our grasp. We need only to reach out, and seize it. Apocalypse never.” [Page 241]
During my 2005 interviews with Mordechai Vanunu I asked him:

“Have you ever considered the idea that the anti-Christ may not be a man at all? I keep thinking how nuclear weapons are promoted by governments as instruments of peace, but they only bring destruction. I can’t imagine that God intended for man to blow up this planet, but instead, to learn how to share it.”

“The only way to peace is peace; the only way is nonviolence. The only answer to Israeli nuclear weapons, their aggression, occupation and oppression, and the wall and refugee camps is to answer them with truth and a peaceful voice. When I became the spy for the world, I did it all for the people of the world. If governments do not report the truth, and if the media does not report the truth, then all we can do is follow our consciences. Daniel Ellsberg did, the woman from Enron did, and I did.”

Before the world as we now know it ends.

“Every man, woman and child lives under a nuclear sword of Damocles, hanging by the slenderest of threads, capable of being cut at any moment by accident, or miscalculation, or by madness. The weapons of war must be abolished before they abolish us.”-John F. Kennedy September 25, 1961