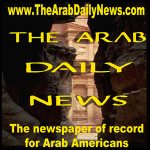 Our list of bloggers/writers is growing. If you are interested in blogging at The Arab Daily News online newspaper, please send an email with your background to our Managing Editor.

We are interested in original feature stories, news stories, interviews, people profiles, coverage of events, issues, business profiles, and more on American Arab and Arab World issues. Use your imagination. Not everything has to be an opinion, but we love commentary. News in your city and about your community is also important.

We also publish, with permission, articles from a variety of news sources including the Maan News Agency (www.MaanNews.net).

Anonymous writers/posts are not accepted. We use photographs provided by Zemanta, Getty Images via an agreement they have with Zemanta, Wikipedia, and original photos taken and provided by our authors.

We also consider press releases. You can pay to have a release published for as little as $150 per 600 words plus a photo. Email Ray Hanania at RGHanania@gmail.com for more information. Press releases are published in the “News” Section of the online news website.

Biographies of Bloggers & Writers at The Arab Daily News

Ray Hanania is an award winning political columnist and author and is the Special US Correspondent for the Arab News Newspaper in Dubai and RIyadh. Hanania covered Chicago Politics and Chicago City Hall from 1976 through 1992. Hanania began writing in 1975 when he published The Middle Eastern Voice newspaper in Chicago (1975-1977). He later published “The National Arab American Times” newspaper which was distributed through 12,500 Middle East food stores in 48 American States (2004-2007).

Hanania writes weekly columns on Middle East and American Arab issues for the Arab News in Saudi Arabia at www.ArabNews.com, and for TheArabDailyNews.com, and at his personal website at TheDailyHookah.com.

Hanania is the recipient of four (4) Chicago Headline Club “Peter Lisagor Awards” for Column writing. In November 2006, he was named “Best Ethnic American Columnist” by the New American Media;In 2009, he received the prestigious Sigma Delta Chi Award for Writing from the Society of Professional Journalists. He is the recipient of the MT Mehdi Courage in Journalism Award. Hanania has also received two (2) Chicago Stick-o-Type awards from the Chicago Newspaper Guild, and in 1990 was nominated by the Chicago Sun-Times for a Pulitzer Prize for his four-part series on the Palestinian Intifada.

His wife and son are Jewish and he performs standup comedy lampooning Arab-Jewish relations, advocating for peace based on non-violence, mutual recognition and Two-States.

Younes works as a news and features Editor at Al Jazeera English based in Qatar where he covers the Middle East.

Younes is also a former contributing analyst for several Arabic, American and International broadcast news channels such as Al Jazeera, Al Arabiya, Dubai TV, Fox News, NBC, ABC, CBS, BBC and Russia Today. His columns appeared in major US publications such as the Chicago Sun Times, Chicago Tribune, and the USA today among others.

Abdennour Toumi is the France correspondent for The Arab Daily News. Nour is a graduate of the University of Algiers Law School, Algiers, Algeria, with a Masters in Public Law; and of the University of Toulouse I, Toulouse, France, Diplôme des Études Approfondies (DEA), in Political Science.

Eileen Fleming founded WeAreWideAwake.org in 2005 as a public service and in response to her first of eight trips to both sides of The Wall in Israel Palestine “because corporate media had failed to seek and report the truth about American policies that collude with Israel’s nuclear deceptions and military occupation of Palestine.”

Eileen has written over a thousand online articles and four books on topic, including the ongoing saga of Israel’s Nuclear Whistle blower, Mordechai Vanunu. In 2012, she ran for US House of Representatives “because no body was talking about America’s foreign policies that endanger this homeland.” Eileen lost the race, but wrote a book about her life as a candidate of conscience who ran on a platform to end the ‘special relationship’ and establish every June 8th as USS LIBERTY Remembrance Day.

Maria (Kouremenou) Khoury is the author of Orthodox Christian children’s books including Christina Goes to the Holy Land walking the footsteps of Christ. She is a graduate of Hellenic College (1982), Harvard University (1985) and Boston University (1992) with a doctor of education degree. Born in Tripoli, Greece, she was raised in Denver, Colorado. On Dec 31, 2009 she was included on the top 4 Human Rights Champions list by DC Human Rights Examiner including the Ecumenical Patriarch Bartholomew and Hilary Clinton.

Maria is the author of Witness in the Holy Land (distributed by www.HolyCrossBookstore.com), a publication reflecting personal experiences living under military occupation with her husband the former Mayor of Taybeh, David Canaan Khoury and three children Elena, Canaan, and Constantine. Her articles have been published world-wide in numerous newspapers and magazines and have been translated to various languages bringing awareness of the Christian presence in the Holy Land. Maria was born in Tripoli, Greece and raised in Denver, Colorado. She is the mother of three adult children Elena, Canaan, Constantine and the author of nine children’s books. Her popular book, Christina Goes to the Holy Land, will help inspire young readers in knowing more about the Christian presence in the land of Christ’s holy birth, crucifixion and resurrection.

She divides her time between her homes in Boston and Taybeh, travels throughout the world promoting the Christina Books and making presentations about the dwindling Christian community in Palestine. Maria Khoury was selected one of the top four 2009 Human Rights Champions.

She is an author and writer and can be reached by email at khourymaria@hotmail.com or at www.saintgeorgetaybeh.org.

Click here to view all blog posts by Maria Khoury.

Click here to read a profile feature on Maria Khoury.

Mohammed Asad is a war correspondent who has covered one of the worst Israeli assaults on the Gaza Strip in history. Risking his life, Asad has taken photographs of the devastation caused by Israel’s brutal military assault in June and July 2014.

During the war, Mohammed Asad’s home in Shujaiyya was destroyed by Israeli missiles, mortars and tank fire on Friday August 1, 2014 while he was documenting the Israeli massacre of civilians in the Gaza Strip. He is now living in temporary housing as he scrambles to find Internet access to share his photographs when possible.

Photographer Mohammed Asad’s photo of Dalia Khalifa won an award in March 2015 at a competition organised by the UN.

‘Unbreakable’ – is the photo of 9yr old Dalia Khalifa, taken at Al-Shifa Hospital on Aug 9th, 2014. Dalia was badly injured in an Israeli air strike during Operation ‘Protective Edge’.

‘Unbreakable’ is the Grand Jury Winner in the photography competition, organised by the United Nations Office for the Coordination of Humanitarian Affairs in the Middle East and North Africa (UN OCHA).

Click here to read the story about how Israel destroyed his home.

Tarek Masood is a blogger and photographer based in the Gaza Strip, in Palestine. He is 19 years old.

His photographs capture the essence of Palestinian Daily life under the brutality of Israel’s oppressive embargo and violence campaign against Palestinian civilians.

Ahmad covers the Gaza Strip along with several other Palestinian photographers.

Dr. Ghassan Rubeiz is an Arab-American writer, journalist and commentator on issues of development, peace and justice. He is the former Middle East Secretary of the Geneva-based World Council of Churches.

He is a Middle East news analyst, commentator and blogger at The Arab Daily News.

Mesho Ska’andar Younas is a Chaldean activist and immigrant from Iraq who came to America in the 1970s to escape persecution in the Arab World. His family lived in Telkaif in Mosul in Northern Iraq for centuries before they were targeted by religious extremists and the dictator Saddam Hussein. They were Nestorians before converting int he 19th Century to the Christian Faith.

He speaks English, Arabic and Aramaic, the original language of the Fertile Crescent.

He is committed to building a cohesive America, and a born conflict mitigater and a goodwill nurturer offering pluralistic solutions on issues of the day, he has a strong national TV, Radio, web and Print Media presence.

Mike’s work is reflected at three websites & twenty two Blogs listed at www.mikeghouse.net and his daily blog is www.TheGhouseDiary.com.

Click here to view all blog posts by Mike Ghouse.

[The opinions of our bloggers and writers are their own and do not necessarily reflect the views of The Arab Daily News.]