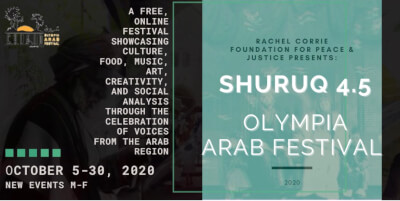 Rachel Corrie Foundation hosts Olympia Washington ArabFest Oct 5 – 30, 2020 Month long virtual online festival will begin October 5 through Oct. 30 with new events each day from 8 AM until 5 PM. Check out their website at https://rachelcorriefoundation.org/ Since 2012, the Rachel Corrie Foundation for Peace and Justice has provided a biennial…