Palestinian prisoners on hunger strike get support. Advocates of human rights are showing support for the hundreds of Palestinian dissidents being held in Israeli prisons who have been denied their rights under the International Rule of Law. Supporters are posting videos and photos showing solidarity with the Palestinian prisoners who are being compared to the political dissidents who were brutalized by the Soviets in their prison Gulag system. Activists have launched the Prisoner of the Day campaign where supporters agree to fast and refrain from eating and drinking for 24-hours, and then posting information about their support on the campaign’s Facebook Page.

At least 7,000 Palestinians and possibly even more are being held in Israel’s Gulag prison system accused of crimes that they have been denied the right to fight using the International Rule of Law.

Palestinians are rounded up by Israeli soldiers in the West Bank, during military raids into the Gaza Strip and even those living in Israel and are placed in detention often without being formally charged. Israel uses the same law that was used against Jews in World War II Germany, in the Soviet Union’s notorious Gulag political prison system, and by the British government during the 1920’s and 1930’s Palestine Mandate years.

Israel can arrest and detain without any formal charges or trial for up to six months, and they can renew the illegal incarceration of Palestinian political dissidents endlessly. About 750 of the prisoners have been arrested on charges of illegally being in Israel and in the Occupied Territories that racists and foes of peace refer to as “Judea and Samaria,” according to the Israeli Human Rights Organization B’Tselem.

Angered by the International spotlight on the violations of the human rights of non-Jews in Israel and in the Occupied Territories, Israel’s government has suspended providing information on detainees to human rights groups since May 2016.

Support the Palestinian Prisoners in Israel’s

Prison Gulag who are on a hunger strike

President Barack Obama who has asserted that he defends the civil and human rights of all individuals, has done nothing to protest the detentions in acquiescence to political lobbying by extremist pro-Israel groups and activists in the United States and in response to extremist Americans who openly and quietly support anti-Arab and anti-Muslim discrimination.  The Israeli practices have been roundly condemned, however, by the United Nations and countries around the world.

To show support for the plight of these Palestinian prisoners, activists are taking a leaf from American Jewish activism of the 1970s when American Jews and pro-Israel supporters protested against the illegal detention without trial of Soviet Jews and conducted public protests.

They also engaged in individual hunger strikes to show solidarity to put pressure on the Soviet dictators.

To put pressure on the Israeli dictators, activists are encouraging supporters of human rights to show solidarity by participating in 24-hour long hunger strikes and publicizing those actions on social media. The protest in solidarity of the prisoners and against Israeli violations of International Laws is being called “Prisoner of the day” campaign.

The international campaign to force Israel to release Palestinian political dissidents and end the torture and brutality that occurs in Israel’s political gulag is being coordinated from Ramallah which is under Israeli military occupation.

This author has also agreed to join this protest to support those prisoners who are on a hunger strike and I will fast for 24 hours through Saturday Sept. 17.

Israel’s legal system has been corrupted by discriminatory politics that treats Jews differently from non-Jews. Harsh critics call this kind of religious racism a form of Apartheid. Other critics assert that the discrimination is societal. But clearly the policies are being used to impose harsh restrictions on non-Jews, many believe in order to force non-Jews to flee the oppression making Israel “Christian-rein” and “Muslim-rein.”

Even when Palestinians serve out the illegally imposed sentences, the Israelis have refused to release dissidents, keeping them under lock and key and denied habeas corpus indefinitely.

The case of Bilal Kayed is just one recent example of thousands that have taken place since Israel was created my military force in 1948.

On 13 June 2016, Palestinian prisoner Bilal Kayed completed serving a prison sentence of 14½ years imposed after he was convicted of a series of offenses, including being a member in the Popular Front for the Liberation of Palestine and two counts of attempted manslaughter. Like any prisoner who serves out his sentence, he was to be released and go home. His entire family was awaiting his return home. But on the day of his release, and before his family even had a chance to meet him, OC Central Command Maj. Gen. Roni Numa signed an order placing Kayed in administrative detention for six months, on the basis of “definite security grounds” and on the grounds of “security of the region and public safety”.

Jews, like those who are members of B’Tselem, have openly protested the Israeli government policies and B’Tselem has come under attack by extremist Israelis.

You can join in supporting the movement to bring civil rights and human rights to non-Jews in Israel and those living under Israeli occupation, and to support those prisoners who are on a hunger strike to demand their rights, by fasting from all food and drink for 24 hours and posting your picture and statement on the Facebook Page. 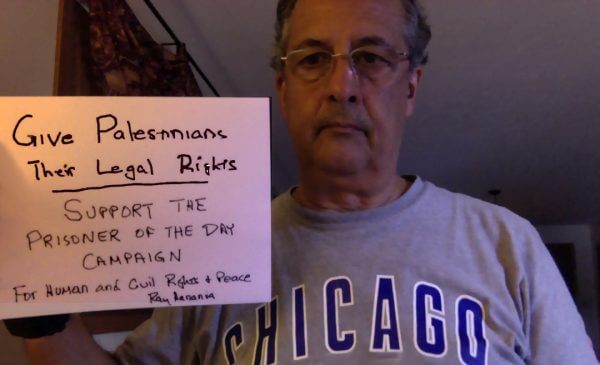 The Post Sept. 11, 2001 victims of hate in America American Arabs