Israel’s latest torturing of Mordechai Vanunu has been a non-story in USA Press, but not in Israel!

In a Google Search for: Mordechai Vanunu News FULL COVERAGE, twenty-one articles fill the first page regarding the aftermath of Vanunu’s first Hebrew speaking interview on September 5th which lasted all of fifteen minutes.

Only two of the reports were written by a reporter who actually interviewed Mordechai Vanunu: this reporter.

After Israel’s Police arrested Vanunu following the TV broadcast, the UK, Russia and Iran covered Vanunu’s 7-day house arrest sentence, but in the “land of the free and home of the brave” the only reports filed have been by this reporter.

In 1958, journalist Edward R. Murrow gave a speech at the Radio-Television News Directors Association, which nailed the network television establishment and its emphasis on popular entertainment over programs that would enlighten and educate the public.

That speech was the climax of the 2005 motion picture “Good Night and Good Luck” and in this must see clip Eisenhower delivers another grave warning to US:


Edward R. Murrow also warned, “We must not confuse dissent with disloyalty. When the loyal opposition dies, I think the soul of America dies with it.”

Isidor Feinstein was born in 1907, and became known as I. F. Stone or Izzy Stone an independent investigative journalist who noted:

If God, as some now say, is dead, He no doubt died of trying to find an equitable solution to the Arab-Jewish problem.

In order for somebody to win an important, major fight 100 years hence, a lot of other people have got to be willing – for the sheer fun and joy of it – to go right ahead and fight, knowing you’re going to lose. You mustn’t feel like a martyr. You’ve got to enjoy it.

Over my last 10 years online, I have had great fun fighting the good fight for a FREE PRESS and freedom for Palestine, but I have also endured tons of BS which would have caused a lesser reporter to give up! 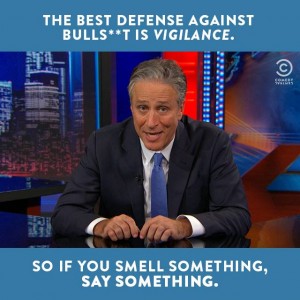 Good thing is all the BS just fuels me with more energy to persist in telling the truth and inspiration always comes from my many heroes and muses; such as Brenda Starr, Dorothy Day, Helen Thomas, Jon Stewart, the Daily Show Correspondents, Edward R. Murrow and Izzy Stone!

Izzy Stone spent his career challenging government deception and press complicity confronted lies of the American government in a time when nobody else had the ker-bangers to do it!

Izzy Stone understood that dissent is the only thing that keeps democracies healthy but his peers and colleagues viewed him as a pariah.

Izzy reminded us, “All governments are run by liars and nothing they say should be believed.”

Izzy was one lone voice out of the wilderness of all the BS that emanated out of D.C., but he lived long enough to see himself vindicated on “searing issues such as the Holocaust and fascism, the McCarthy purges, the nuclear arms race, the civil rights movement, the war in Vietnam, and the endless struggle between Israelis and Palestinians.”

As another lone voice I have been confronting the BS about Israel’s Nuclear Deceptions for the last ten years online and so I reiterate:

In 2005, this American was writing her first historical fiction while in east Jerusalem. I became a reporter after Vanunu told me:

View “30 Minutes with Vanunu” which did NOT go through Israeli Censors and was taped a few weeks after Vanunu’s FREEDOM of SPEECH Trial began in 2006. All of my questions were based on the Universal Declaration of Human Rights.

Vanunu’s freedom of speech trial culminated in 78 days back in solitary in 2010 essentially because he spoke to foreign media in 2004!

Israel can soon END the Vanunu Saga when their nuclear whistle blower returns to High Court for the 8th time seeking to end the restrictions which have denied his inalienable human rights.

Godspeed on a Free Vanunu, good day, good night and good luck to US All!