Silverware clinks on plates, numerous excited voices float above the large trays of food laid out and loud bursts of laughter punctuate most bites of food.  We are in the colorful and warm ‘Women in Hebron’ embroidery cooperative space in the village of Idna in the Hebron district.  And we are surrounded by the women who keep the business running and the spirit of community and empowerment nearly bursting the center at its very seams.

From the worn hands of an elderly woman rushing her crease-patterned hands through the weaving of a carpet stretching the length of the cooperative itself to the bright eyes of 14 year old Yafa Slemiah whose mother founded Women in Hebron, at this cooperative, there is space for everyone.

“We welcome everyone here.  People from all over the world have come to work with us.  We open our home to them; there we have an entire floor dedicated for volunteers, three rooms and three bathrooms, they have free food and can travel with us.  …And we teach them embroidery.”

From humble beginnings in 2005, the cooperative itself now boasts a beautiful shop in the souq.  The shop is the only woman-run establishment in Hebron and it is rare to pass the richly colorful, craft-filled space without coming in contact with the welcoming smile of Leila, the shop owner, Yafa’s aunt and sister of Women in Hebron’s director, Nawal Slemiah.

Currently, Nawal is traveling through America promoting the cooperative, thus her enthusiastic and kind daughter sits with us as both translator and story teller- conveying what Women in Hebron means to those who are a part of it, creating breathtaking bead-work and embroidered traditional Palestinian dresses for weddings and events, holidays and parties. 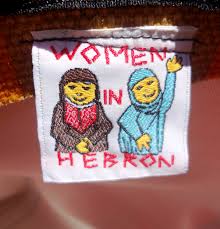 23 year old Haneen sits beside Yafa, her work with the cooperative began four years ago.  “My mom was sick, pregnant with twins and already had twins.  I had to leave school in the sixth grade to care for her.  There was no work for a woman who is uneducated.  But I knew how to embroider and here I can teach other women.”

And like all other elements of life in the occupied territories, the work of Women in Hebron and Leila’s shop in the souq do not go untouched by the cruelty of their occupiers.  “Shops in Hebron gets lots of water from the rain because the soldiers close the gates separating the settlers from the old city.  Our area floods so the settlers can stay dry.”  This was the reality this past April in Hebron when heavy rains flooded the souq to staggering chest level heights, destroying shelf-fulls of embroidery Leila made by hand at the cooperative to sell at market.

Yafa’s frustration is clear, “Can you imagine making items by hand for months?  Months.  Things that take days to transport to the shop, only to have it flooded out so people who stole your land can stay dry?”   Another way the occupation effects the cooperative is by deporting volunteers with Arabic names or those who come stating that they are visiting the West Bank to do embroidery work.  “The volunteers have to lie and say they are visiting Tel Aviv or they do not get through at the airport.” 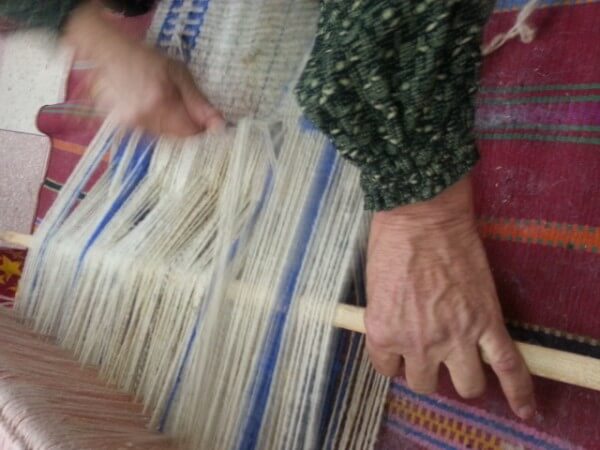 Through our work, people will know about traditional Palestinian culture.  They will come to know the situation here.  We will let people know we are not terrorists.  I can help make a difference and then I can teach embroidery to my daughters.”

Isma has been at the cooperative for three years.  At 24, with limited education, Isma’s options were few.  “Not only do uneducated women have a difficult time finding work, but also the occupation limits us severely.  We are unable to travel.

We have no airport.  If we want to go anywhere or do anything, we must go through Israel to do it and they do not want to help us.”  Nawal welcomed Isma into the cooperative, allowing her to cook and clean while learning the machines, she is now one of the women who train the volunteers who come in. 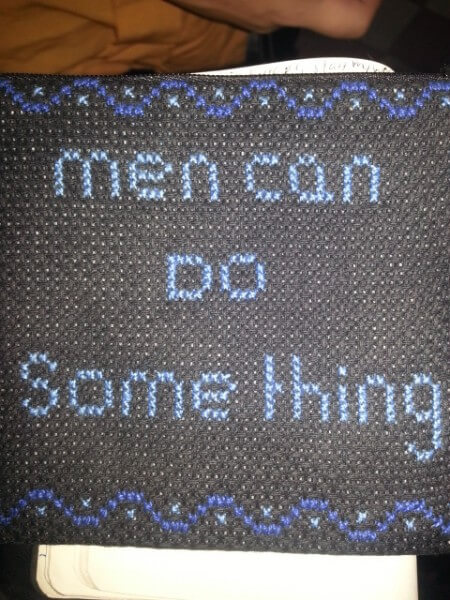 To be a volunteer with the cooperative, you are not only welcomed into Nawal’s home, you learn how to run the website, answer the emails,process the sales- the entire business side of the cooperative is shared alongside the teaching of the handcrafting.  They also have a colorful nursery within the cooperative so women with children can bring them along as they work.

After lunch, Yafa and the others walk us through a room with shelves made bright by their wares.  Shelf after shelf houses beaded wallets, purses, scarves and even bookmarks that can be personalized, all kaleidoscopic, all made by the hands of those who are economically and socially strangled by an occupation that seeks to end them- all binds broken in the process of free creation.  One of the women laughs and holds up a beaded wallet that says “Women can do anything.”  She then turns it over, “Men can do something.” 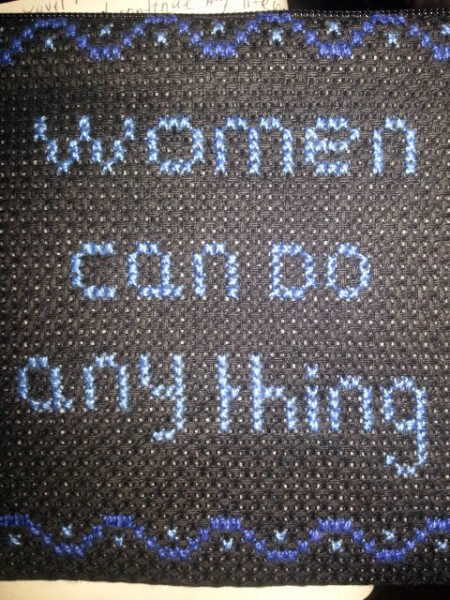 Before leaving them to their work, we sit with Yafa a few more moments.   She describes the world she knows, “The occupation has taken over everyone’s lives.  At this moment, if you walked outside and didn’t see a soldier you would wonder why not.  The women working here all have to worry about the occupation when they consider each day they spend at the cooperative.  ‘What if I’m not home and the soldiers raid my home?  What if I’m gone too long?’  Occupation is always the first thing to think about.  In Palestine this is normal.  She can die.  I can die.  The soldiers can kill us and the people may talk about it for one day, one week, but here this is normal life.  During the time the world hears about a Palestinian getting killed, like the 18 month old baby the settlers burned to death recently, three more Palestinians are killed. The occupation makes our lives gross.”

The occupation doesn’t only entail soldier harassment and collective punishments enacted against Palestinians as a whole.  Settler violence is a daily and worsening issue.  “They are building a fence above our homes now because the settlers throw eggs down on us.  They throw rocks. When we are at home in the middle of the night, we do not wear our hijabs, only to have male settlers jump into our homes in the middle of the night and see us this way before running out again.  This can never happen for ‘normal’ people.  You do not see this in Europe or anywhere else.  So this is very different for us.” 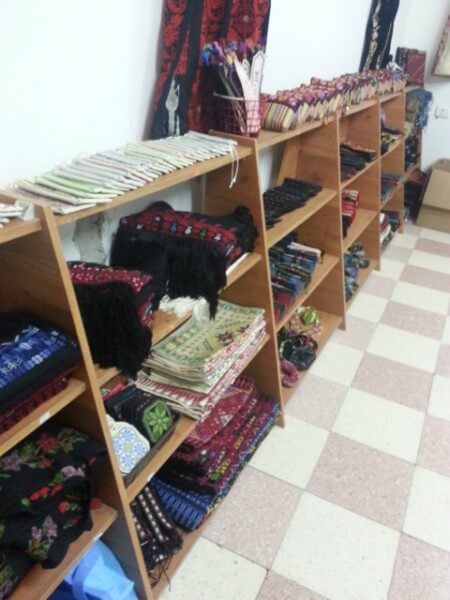 With the occupation ‘coming first,’ the all-encompassing hurdle to be considered by the people who are subjugated and oppressed by it, the Women in Hebron are utilizing a rich and generational tradition to perpetuate their culture and their resistance to a system who would sooner end their lives than to better them.

They are dichotomous existences these women lead of both fighting oppressive social and power structures whilst building and creating a world where all voices are heard, where they see more friends in a day than they see soldiers, where every facet of their lives isn’t stained with the awful truth of a military occupation and near seven decade ethnic cleansing.

The women we share this afternoon with are making more with their hands than what meets the eye.  They are molding an empowering path for Palestinian women, one more elaborate- and accessible- with each passing day.