Professor Simon Critchley wrote about the happiest man he has ever met; a former New Yorker who morphed into a monk in Athens.

This former New Yorker writes about the saddest man I have ever met; Israel’s nuclear whistle blower Vanunu Mordechai who uses social media to report his latest news because The Media ignores him.

Simon Critchley is a professor of philosophy at the New School for Social Research and author of the soon to be released “Tragedy, the Greeks, and Us.”

Excerpted from the seventh installment in a New York Times eight-part philosophical tour Critchley wrote about the energy that only comes from God in “Athens in Pieces: The Happiest Man I’ve Ever Met” from which I excerpt:

Toward the end of our little road trip, Ioanikios looked at me with his clear eyes and spoke quietly: “It is hard being a monk. Man was made for something else, to make a family. And we have chosen a different life. This is only possible when the energy comes from God.”

“What is that energy?” I asked.

“It is hard to describe, but you could call it grace.” He paused. “When you experience it, it’s like you have no enemies. You know what Jesus says in the Sermon on the Mount, ‘Love your enemies’, and you think that’s a crazy thing to say. How can that be? But when you feel that energy, you feel supported, and it feels like the most obvious thing. You feel only joy and happiness.” He repeated the word “joy” three times. “For me, this life is hard, but I feel that joy sometimes when I’m singing.”

I know that joy best when ever I break news regarding my missions from God!

ONE mission began in 2005 during my first trip to Jerusalem after a serendipitous encounter with Mordechai Vanunu who had been freed from 18 years behind bars under draconian restrictions including he NOT speak to foreigners.

Before my first of 8 investigative trips to both sides of Israel’s Wall in the Holy Land, I was a 50-year-old comfortably numb Christian who mistakenly believed I did not have to take a side in the Israel-Palestinian conflict.

However what I witnessed, heard, saw, and felt in my gut led to the realization of my childhood dream, which was to be a reporter. Within weeks of returning to the USA my dream came true with the establishment of  WeAreWideAwake.org.

In 2013, I became senior non-Arab correspondent for TADN and established the Vanunu Page because The Media will not report on Vanunu’s human rights struggle or Israel’s WMD. 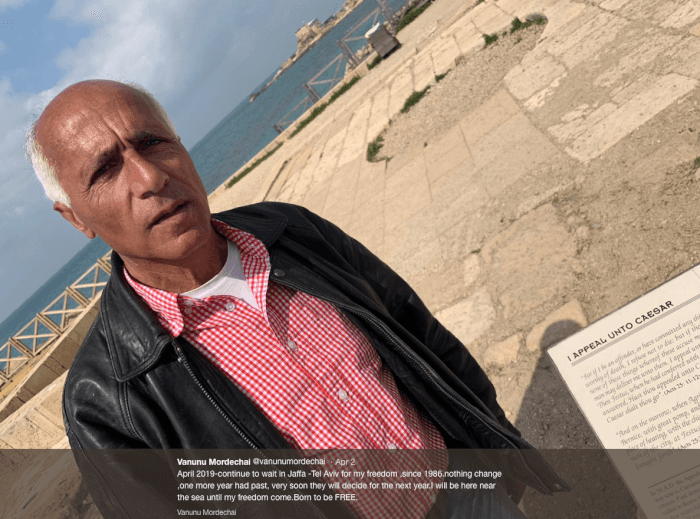 This April 21stmarks 15 years since Vanunu emerged from 18 years behind bars to open-air captivity under draconian restrictions.

In May 2015, Vanunu married Kristin Joachimsen, an Oslo professor and was granted asylum under Norway’s family reunification law. Israel has continued to ignore it.

On Tuesday the 64-year-old whistleblower tweeted regarding his ongoing human rights struggle: April 2019-continue to wait in Jaffa -Tel Aviv for my freedom, since 1986 nothing change, one more year had past, very soon they will decide for the next year. I will be here near the sea until my freedom come. Born to be FREE.

In the right lower corner of the shot is a paper titled “APPEAL UNTO CAESAR” from the New Testament book of Acts chapter 25:11-12.

If, however, I am guilty of doing anything deserving death, I do not refuse to die. But if the charges brought against me by these Jews are not true, no one has the right to hand me over to them. I appeal to Caesar!”

After Festus had conferred with his council, he declared: “You have appealed to Caesar. To Caesar you will go!”

Festus was a Procurator, which was a Roman official, appointed by a magistrate or the emperor.

The word ‘procurator’ is derived from the Latin verb procurare, which means ‘to take care’.

Now that I have taken care of reporting Vanunu’s breaking news,

This American returns to another mission from God that I am expressing in my second screenplay:

This American and the USS Liberty: A Love Story

It will soon be published

In International Law subsidiary: Can war be just? Abdennour Toumi