Ten years after beginning my mission from God in support of the USS LIBERTY a nationwide grass roots movement has rooted dedicated to ending fifty years of a hellacious USA Government Cover-Up of the FAILURE of the LBJ Administration to support the LIBERTY troops with an immediate rescue.

In 2007, Author and USS Liberty veteran Phillip F. Tourney, informed this Non-Arab American Correspondent that, “It was God that kept the USS LIBERTY afloat” and ignited my burning desire to join the effort to establish every June 8 to be known as USS LIBERTY Remembrance Day. 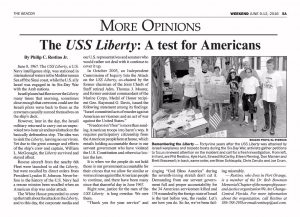 A founding member of We Americans for the USS Liberty is Philip C. Restino, Jr., a public service community activist who wrote regarding the USS LIBERTY:

The USS Liberty, a U.S. Navy intelligence ship, was stationed in International waters in the Mediterranean Sea off the Sinai coast while the U.S. ally Israel was engaged in its Six Day war with the Arab nations. Israeli planes had flown over the Liberty many times that morning; sometimes close enough where crewmen could see the Israeli pilots wave back to them as they casually sunned themselves on the ship’s deck.

However, later in the day the Israeli military returned to carry out an unprovoked 2-hour air and naval attack on the basically defenseless ship. The idea was to sink the Liberty leaving no survivors, yet due to the great courage and efforts of the ship’s crew and captain, William L. McGonagle, the Liberty survived and stayed afloat.

Rescue aircraft from the nearby Sixth Fleet were launched to aid the Liberty but were recalled by direct orders from President Lyndon B. Johnson.

Never before in the history of the U.S. Navy had a rescue mission been recalled when an American ship was under attack.

The White House proceeded to cover up the truth about the attack on the Liberty, and to this day the corporate media and our U.S. Representatives and Senators who would rather not deal with it continue to cover it up.

In October 2003 an Independent Commission of Inquiry into the Attack on the USS Liberty, co-chaired by former Chairman of the Joint Chiefs of Staff, Admiral Thomas J. Moorer, USN (Ret.) and former Assistant Commandant of the Marine Corps, General Raymond G. Davis, USMC (Medal of Honor), issued the following statement amongst its findings: “Israel committed acts of murder against American servicemen and an act of war against the United States.”

“Freedom isn’t free” is more than sending American troops into harm’s way. It requires participatory citizenship from the American people here at home, which entails holding accountable those in our servant government who have violated the U.S. Constitution and otherwise broken the law.

It is when we the people do not hold those in our government accountable for their crimes that we allow for similar or worse crimes against the American people to continue, and there have been many since that shameful day in June 1967. Right now justice for the men of the USS Liberty is long overdue. We owe them.

“Thank you for your service” and singing God Bless America during the 7th inning stretch doesn’t cut it. Demanding from our servant government full and proper accountability for the 34 American servicemen killed and 174 wounded by the foreign state of Israel is the test before you the reader…..

POTUS Trump and all Americans would be wise to follow Restino’s lead and listen to the Veterans of the USS LIBERTY!

When the USS LIBERTY Veterans are accorded the RESPECT they deserve for their fifty year struggle for FREEDOM in the USA it will be a much better world!

If I can’t laugh and “if I can’t dance it’s not my revolution” [Emma Goldman] this American ends this piece in support of the USS LIBERTY inspired by these Blues Brothers muses: 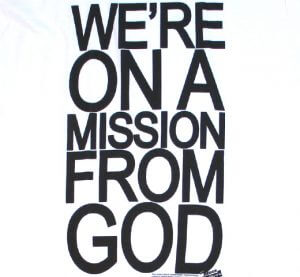 Will US Campaign to End the Israeli Occupation Respond? American Arabs