On Monday at a Likud election rally in Jerusalem, Israeli Prime Minister Benjamin Netanyahu ignored the increasing congressional efforts to dissuade him from speaking before the U.S. Congress on March 3rd claiming:

“A bad deal with Iran is forming in Munich that will endanger Israel’s existence. … Therefore I am determined to go to Washington and present Israel’s position before the members of Congress and the American people.” 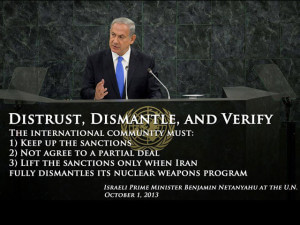 Mr. Boehner’s move backfired. Inviting a foreign leader without the president’s blessing is a breach of protocol, and…

Shortly after Mr. Boehner extended the invitation, 10 Democratic senators agreed to postpone a vote on an Iran sanctions bill that just days before they were claiming to support…

How embarrassing….[and] speaking up next month before the United States Congress would not serve Israel’s interests….And he has turned Israel into a political football.

On Monday, there were some reports — reliability unclear — that Mr. Netanyahu was considering alternatives to the speech. Better late than never.

On 5 February 2015, page A6 of The New York Times the headline read: Iran President Accuses West of Distorting Atomic Plans from which I briefly excerpt:

President Hassan Rouhani of Iran criticized nuclear-armed powers on Wednesday, singling out the United States and Israel for what he described as false and hypocritical warnings about Iranian atomic ambitions.
In a speech, Mr. Rouhani repeated his government’s claim that it neither covets nuclear weapons nor aspires to have them. That is a central issue in the prolonged international negotiations over Iranian nuclear activities, which Iran asserts are for purely peaceful purposes.
“They tell us, ‘We don’t want Iran to make atomic bombs’ — you who have made atomic bombs,” Mr. Rouhani said…

Israel’s government, which considers Iran one of its most worrisome adversaries, has repeatedly accused the Iranians of seeking nuclear weapons. At the same time, Israel has never officially acknowledged that it possesses nuclear weapons, only that it will “not be the first country to introduce nuclear weapons in the Middle East.”

Rouhani said what the World learned in 1986 when London’s THE SUNDAY TIMES published a front page story just as Mordechai Vanunu was being kidnapped by Mossad from Rome.

However a search through The New York Times Internet archives for “Mordechai Vanunu” garnered only one report, dated 21 April 2004 [the day Vanunu emerged from 18 years behind bars to open air captivity]

...Before Mr. Vanunu spoke out, it was widely assumed that Israel had nuclear arms. But to this day, Israel refuses to confirm or deny possessing such weapons under its policy of “nuclear ambiguity.”

Based on Mr. Vanunu’s information, nuclear experts estimated Israel possessed between 100 and 200 nuclear weapons. More recent estimates are in a similar range…

Critics say that Israel, with the tacit backing of the United States, has been allowed to develop a large nuclear arsenal in secret, while the Americans have insisted that other Middle East countries be prevented from building weapons of mass destruction.

Mr. Vanunu said Israel did not “need the nuclear arms, especially now when all the Middle East is free from nuclear weapons. My message today to all the world is open Dimona reactor for inspection,” he said.

“All the secrets I had were published in 1989 in an important book, by [Nuclear Physicist] Frank Barnaby, “The Invisible Bomb: Nuclear Arms Race in the Middle East.”

In 1986, Barnaby was hired by the London Sunday Times to vet Vanunu’s story and he testified at Vanunu’s closed door trial: “I found Vanunu very straightforward about his motives for violating Israel’s secrecy laws he explained to me that he believed that both the Israeli and the world public had the right to know about the information he passed on. He seemed to me to be acting ideologically.

In 2005, Vanunu elaborated:
“The French were responsible for the actual building of the Dimona. The Germans gave the money; they were feeling guilty for the Holocaust, and tried to pay their way out. Everything inside was written in French, when I was there, almost twenty years ago. Back then, the Dimona descended seven floors underground.

“Did you know that President Kennedy tried to stop Israel from building atomic weapons? In 1963, he forced Prime Minister Ben Guirion to admit the Dimona was not a textile plant, as the sign outside proclaimed, but a nuclear plant.

“The Prime Minister said, ‘The nuclear reactor is only for peace.’
“When Johnson became president, he made an agreement with Israel that two senators would come every year to inspect.

“Before the senators would visit, the Israelis would build a wall to block the underground elevators and stairways. From 1963 to ’69, the senators came, but they never knew about the wall that hid the rest of the Dimona from them.

The Arms Control Association, a research group in Washington, says Israel has 100 to 200 warheads.

Much of the Iranian nuclear program was frozen last year while negotiators sought a permanent accord.

The negotiators, from Iran and the P5 plus one powers- the five permanent members of the United Nations Security Council: Britain, China, France, Russia, America— plus Germany, have given themselves until March 24 to reach the basics of a permanent agreement over Iran’s Nuclear Program.

“Every man, woman and child lives under a nuclear sword of Damocles, hanging by the slenderest of threads, capable of being cut at any moment by accident, or miscalculation, or by madness. The weapons of war must be abolished before they abolish us.”-John F. Kennedy, September 25, 1961

You cannot speak with credibility regarding Iran’s nuclear program without  addressing Israel’s chemical and nuclear weapons and:

“You cannot talk like sane men around a peace table while the atomic bomb itself is ticking beneath it. Do not treat the atomic bomb as a weapon of offense; do not treat it as an instrument of the police. Treat the bomb for what it is: the visible insanity of a civilization that has ceased to obey the laws of life.”– Lewis Mumford, 1946

Sign and Share Petition to World Media and Israel: We are not free, until Vanunu is free!

Palestinians should accept and build on Trump’s peace plan  Bloggers

Lebanon on a failure track for the near future American Arabs

The Persian Project: A Sunni perspective on history and today’s reality Arab World