On 3 September 2016, Native Americans protesting the Dakota Access Pipeline Company were attacked by security guards with dogs and showered in pepper spray.

The months long protests has united the Standing Rock Sioux tribe with members of 200 other tribes from across the U.S. and Canada against the $3.8 billion pipeline’s construction route.

The Dakota pipeline is intended to carry about 500,000 barrels of crude per day from North Dakota’s Bakken oilfield to Illinois.

The North Dakota state prosecutor’s office charged Amy Goodman with participating in a “riot” for filming and broadcasting the September 3 attack at Standing Rock.

At the end of the Democracy Now!’s video which has been viewed millions of times a man states the obvious:

No one owns this land. This land belongs to the earth. We are only caretakers. We’re caretakers of the earth.

After the Democracy Now!’s video went viral across Twitter and Facebook it landed on CNN, CBS, NBC, MSNBC, NPR-, which had ALL ignored the situation until then!

Rolling Stone’s Matt Taibbi noted the outrage it generated may have influenced the Obama administration’s decision to halt work on the pipeline several days later.

Carlos Lauría, senior program coordinator for the Americas at The Committee to Protect Journalists responded to Amy Goodman’s arrest in a statement:

This arrest warrant is a transparent attempt to intimidate reporters from covering protests of significant public interest. Authorities in North Dakota should stop embarrassing themselves, drop the charges against Amy Goodman, and ensure that all reporters are free to do their jobs.

North Dakota District Judge John Grinsteiner will decide on October 17, whether probable cause exists for the riot charge.

Goodman will appear at Morton County court on Monday if the charges are approved. Goodman stated:

I came back to North Dakota to fight a trespass charge. They saw that they could never make that charge stick, so now they want to charge me with rioting. I wasn’t trespassing, I wasn’t engaging in a riot, I was doing my job as a journalist by covering a violent attack on Native American protesters.

On October 11, Deia Schlosberg, the producer of “How to Let Go of the World” and “Love All the Things Climate Can’t Change” was also arrested in North Dakota.

Schlosberg was reporting on a climate-change protest. She was held for 48 hours before being allowed to speak to a lawyer. The authorities confiscated her footage and charged her with three counts of felony conspiracy. She faces up to 45 years behind bars.

American Journalists have also been arrested for reporting on Black Lives Matter and other important NEWS the USA corporate mainstream media fails to cover- such as Israel’s WMD!

Amy Goodman was a 2008 recipient of The Right Livelihood Award for “developing an innovative model of truly independent grassroots political journalism that brings to millions of people the alternative voices that are often excluded by the mainstream media.”

I strongly believe that media can be a force for peace. It is the responsibility of journalists to give voice to those who have been forgotten, forsaken and beaten down by the powerful.  It is the best reason I know to carry our pens, cameras and microphones out into the world. The media should be a sanctuary for dissent. It is our job to go to where the silence is.

Amy Goodman’s 2004 interview with Mordechai Vanunu was used as major testimony against him in his freedom of speech trial that began the same day Hamas was democratically elected on 25 January 2006.

In 1987, Vanunu was awarded The Right Livelihood Award [which he received at a belated ceremony in Jerusalem in 2005]. In his acceptance speech written from prison Israel’s Nuclear Whistle Blower warned:

This struggle is not only a legitimate one – it is a moral, inescapable struggle. What we who are opposed to nuclear arms are saying is this: it is not we who broke the law, who violated human and civil rights, but the governments which chose to create the greatest threat to human life that ever existed. Never in human history was there such a threat to the very existence of mankind and to all life on earth.

And no government, not even the most democratic, can force us to live under this threat. No state in the world can offer any kind of security against this menace of a nuclear holocaust, or guarantee to prevent it.

By returning to the pre-nuclear era we are the sane civilians, we want to live – and we say to the governments, “no nuclear arms!”

We must arouse people and warn them. Ours is the role of the angry prophet.

A person who refuses to accept the existence of this suicidal type of arms is a mentally healthy person, who does not want to be expelled from this earth as Adam was expelled from the Garden of Eden.

Already now there are enough nuclear missiles to destroy the world many times over.

Nuclear weapons are means of extermination, and cannot protect any country, including Israel.

A state that lives in fear of destruction must not threaten the whole world with annihilation. The people who experienced a holocaust must not bring a holocaust upon another people.

Moreover, a nuclear war is worse than the holocaust of World War II. A single bomb can eliminate a whole city, destroy half a million people in one blow, including women, children and old people, and everything that lives in it, and even the very infra-structure of the city.

This issue should unite us all, because that is our real enemy.

Any country, which manufactures and stocks nuclear weapons, is first of all endangering its own citizens. This is why the citizens must confront their government and warn it that it has no right to expose them to this danger.

Because, in effect, the citizens are being held hostage by their own government, just as if they have been hijacked and deprived of their freedom and threatened. Therefore, when a man is held hostage by his own government, the least he can do is resist it and its nuclear policy. He must do this in self-defense, which is a basic civil right.

The United States developed its atom bomb during World War II, without giving much thought to the long-term effects and consequences – and the rest of the world has followed it to this day.

Only peace between states can promise real security to each state and to every citizen. No force in the world can provide security or ensure survival.

It was not force, which spread the word of Jesus through the world.

Children are brought into this world to live in it, not to fight. It is not true that war is an inevitable state of affairs – on the contrary, what is essential is peace.

It is a question of listening to your conscience, to the voice of Jesus telling you, yes, this is what you must do–sacrifice yourself, your personal freedom: in the nuclear era, and with the nuclear threat hanging over us, the answer to this challenge is obvious, one may not evade such a responsibility, one must accept the mission in order to warn against the danger…- Beyond Nuclear: Mordechai Vanunu’s FREEDOM of SPEECH Trial and My Life as a Muckraker 2005-2010

At that point in Vanunu’s 1987 statement the Israeli censors: censored the rest!

On October 13,  Mordechai Vanunu tweeted an update regarding his latest trail with this photo: 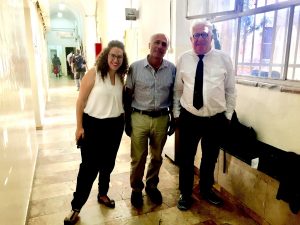 1986-2016.,Still waiting for Freedom in the court this week with my Lawyers.Vanunu continue to ask for freedom Now.to fly to Freedom!