“The explanation for America’s impotent and morally bankrupt policy is the political clout of the Israel lobby. Barack Obama knows that if he were to side with the Palestinians in Gaza or criticize Israel’s actions in any way, he would face a firestorm of criticism from the lobby and his chances of getting Congressional approval for a deal with Iran would evaporate.”

The Israeli Drain on US Tax Dollars:

The United States (US)through the US-Israel Memorandum of Understanding, 2009 to 2018, will have committed$30 billion dollars in military financial aid to Israel over the assigned ten-year period.Approximately three billion a year of America’s tax dollars is directed as financial aid to Israel, a country whose population is about a million fewer that the state of New Jersey.

According to the article The staggering cost of Israel to Americans on the If Americans Knew website page,

“In all, direct US disbursements to Israel are higher than to any other country, even though Israelis only make up 0.1% of the world’s population. On average, Israelis receive 7,000 times more US foreign aid per capita than other people throughout the world, despite the fact that Israel is one of the world’s more affluent nations.”

This table illustrates how much of US tax dollars go to Israel every year on a state by state basis, and compares that to examples of what those same tax dollars could be used for to improve the lives of its own state’s citizens.

This is the data pulled from the www.stoptheblankcheck.org, a website that maintains the latest figures by state on how much money goes to Israel each day and year.

Furthermore, unlike any other foreign country that receives US financial aid, the State of Israel is given all of the money at the beginning of the year in a lump sum, which allows them to earn the interest that would have been allocated in the US.

Israel then invests the lump sum of US financial aid received into US bonds, which the US treasury pays Israel interest. To ensure the US is able to meet its financial commitment to Israel, the American government borrows money at high interest compounded by the FY 2015 federal government budget, it is estimated that the US will have a deficit of $564 billion.

Furthermore an American poll reported in the article showed thatover 60 percent of respondents felt that the US gives too much foreign aid to Israel.

Also when looking at the US foreign aid budget, Israel is its top recipient receiving more than all combined for Africa, the Caribbean and Latin America.

And when one looks at the latest United Nations Human Development Index (HDI), the State of Israel ranks 19 out of 187 countries documented, placing it in the “Very High Human Development” category along with western nations in Europe and North America.

The HDI is calculated on data collected on each country’s life expectancy, schooling, and gross national income per capita.

The first African country on the HDI is Libya which places at 55, with the first Arab country Lebanon at 65, Jordan is next at 77, Palestine at 107which places as high due to the illegal Israeli settlements being included in the evaluation;Egypt thenfollows at 110, with South Africa at 118. The HDI list jumps to 140 for Congo as the next African country with the rest further down the rank.

The first Latin American country on the HDI is Chile at 41, with the first Caribbean country at 44 for Cuba.

It seems absurd that a nation that ranks as a “Very high human development” nation would be on the receiving end of such a high amount of foreign aid, when the countries within that cohort are in actually the contributors of foreign aid through government foreign aid programs and support of global organizations such as the United Nations (UN), International Monetary Fund (IMF) and the International Criminal Court(ICC).

But it does not end there. 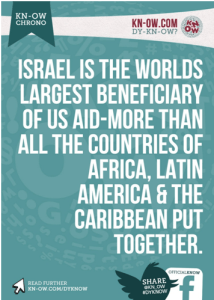 Israel has the fourth largest arms industry in the world and sells its arms to nations that are considered strategic competitors, like China, or are at odds with the US like Pakistan. Should relations between the US and these nations change, the US military may be attacked using Israeli weapons that have been supported in their manufacturing by US military financial aid in its American-Israeli Memorandum of Understanding.

Quoted fromthe article The Staggering Cost of Israel to Americans, the US pays huge aid packages to Israel’s neighbours to ensure peace.

”… the US gives roughly $1.6 billion per year to Egypt and Jordan in aid packages arranged largely in exchange for peace treaties with Israel. The treaties don’t include justice for Palestinians, and are therefore deeply unpopular with the local populations.”

At times when US politicians are calling for budgetary restraint, why does Israel continue to receive substantial financial aid when it seems to be detrimental to the United States?

One answer is the aggressive lobbying by the pro-Israeli groups such as AIPAC. AIPAC is the most prominent governmental lobbying organization on behalf of the Israel.

AIPAC openly channels campaign funds to American politicians in return for their support for Israel through financial campaign donations by AIPAC members who are often partnered with specific politicians under an AIPAC initiative referred to as “shared values”.

According to ex-congressman Brian Baird,

In other words, one’s election win is almost dependent on AIPAC’s support.

AIPAC strongly supports substantial US financial aid to Israel, and influences politicians to approve this.

And while AIPAC does not hide its legislative agenda on Iran, supporting Israel’s security and suspending support and aid to Palestine, the American public has not connected last summer’s punitive and illegal 51-day Israeli war on Gaza that destroyed 18,000 buildings making more than 100,000 people internally displaced that has further been crippled by the illegal eight-year military blockade.

The $3.1 billion dollar cheque from the US to Israel covered the Israeli military costs to bombard Gaza by air, ground and sea along with invade and destroy causing more than $6 billion dollars in damages that international donors are faced in ameliorating for the third time since 2009. Even if Gaza receives the funds needed, it will take more than 20 years to just put Gaza back after the second Israeli war of 2012.

The war crimes committed on Gaza by Israel makes the United States complicit with its resounding political, financial and military support of Israel.

It is time for Americans to have control of where their tax money goes, rather than a strong lobby group.

Our question is to America, and to all American political representatives,

“… when Congress in general has for the past six years been fueled by Republicans with their specific call for a tightening of the budgetary belt, why is the Israeli aid package never mentioned?”

And… to those politicians who accept pro-Israeli campaign contributions,

“America, a country founded on the principles of resisting colonization and securing for its citizens rights and freedoms that have set the standard for other nations, continues to participate and look the other way in Israel’s crimes against the Palestinian people?”

It is time for American politicians to answer these questions and to take the step to #ShutDownAIPAC and #StopTheBlankCheck for #Israel. It is time to for #America to end the #AIPAC #occupation of its #Congress that through American financial and political support of #Israel makes #America complicit in the illegal #occupation and #crimes against #Palestine

Human Development Index and Its Components

Military Aid to Israel by State

The Staggering Cost of Israel to Americans

US Foreign Aid to Israel

Who does Israel sell arms to? The Defense Ministry won’t tell