“Rosewater” is based on the best-selling memoir by Maziar Bahari, Then They Came for Me: A Family’s Story of Love, Captivity, and Survival” about his 118-day incarceration inside Iran’s notorious Evin prison.

Bahari was arrested a few days after appearing in one of Daily Show correspondent Jason Jones‘ field pieces from Tehran.

The spoof was used as proof that Bahari colluded with foreign meddlers and was engaged in “media espionage.”

Bahari now lives in London with his wife and daughter, born eight days after he was freed from Evin on Oct. 17, 2009. He said, “I don’t think that Jon felt responsible for my arrest. But I think he felt personally invested in the story because his name came up in a dark interrogation room in a prison in Iran.” 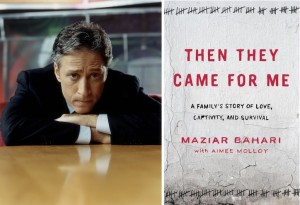 Regarding his 14 hours six days a week directing schedule, Stewart said, “Every day was hard. There also were cultural considerations; filming commenced during the Muslim holiday of Ramadan, which is marked with a month of fasting.”

Referring to himself Stewart said, “They’ve followed some idiot out into the desert It’s 100 degrees out. We’re in an operating Jordanian prison. And half the crew is not eating. I just spent the first week apologizing to everyone.”

Iran’s state-run media campaign has begun to discredit Rosewater, calling it “anti-Iranian,” “ultra-formulaic,” conceived by the “Zionist lobby” and commissioned by Stewart’s “masters,” among them the “Jewish family Pritzker”.

In his July 14 segment that examined the “asymmetrical” nature of the Israel Defense Forces’ incursion into the Gaza Strip Jon agitated Zionists.

Noting the Israeli military’s practice of warning “Gaza’s residents of imminent bombing with a smaller, warning bombing, an ‘amuse-boom,’ if you will…And then at that point, what are Gazans supposed to do?! Evacuate to where? Have you f—ing seen Gaza?” 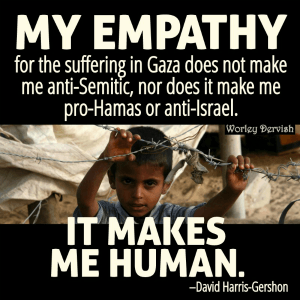 Responding to neocons and Israeli hawks who accused him of being a self-hating Jew, Jon replies:

Look, there’s a lot of reasons why I hate myself — being Jewish isn’t one of them.

So when someone starts throwing that around, or throwing around you’re pro-terrorist, it’s more just disappointing than anything else.

I’ve made a living for 16 years criticizing certain policies that I think are not good for America. That doesn’t make me anti-American.

And if I do the same with Israel, that doesn’t make me anti-Israel.

You cannot outsmart dogma, no matter what you do…

‘The arc of the moral universe is long, but it bends toward justice.’

That possibility continues to push us in the direction of something positive, not negative.

That doesn’t mean there are not ridiculous and horrendous tragedies.

But I think this is a good time to be alive.

I have hope for this country. I don’t lose that. 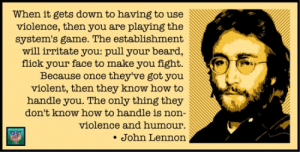 Two years ago on Vanunu’s Youtube Discussion Wall, I wrote:

As Allen Ginsburg said: “FUCK hope! It’s not about hope. You don’t do what you do because you hope things will get better. It’s about getting up every morning and asking yourself what’s the right thing to do and doing it.” This Candidate of Conscience for US HOUSE is Doing just That @ WeAreWideAwake published first on 5 June: “Vanunu’s Invite, Israel’s Nuclear Apartheid and The Real Deal About Iran”

The last Vanunu wrote was 8 months ago:

Dec’ 29-2013:No justice in israel democracy.The supreme court by its chief  justice grunis rejected my appeal to be free from israel state ,after 27 years in israel prison,
Freedom Now First.(FNF). VMJC-Vanunu Mordechai

When this Petition to World Media and Israel We are not Free until Vanunu is FREE reaches 10,000 signatures [currently at 8,700] this writer who wrote it, will include a snail mail copy to Jon along with copies to top USA Media Outlets, Israel’s Prime minister, President, Supreme Court, Interior Minister, Gideon Sa’ar, etc

On 25 December, Mordechai Vanunu’s 7th Supreme Court Appeal for his right to leave ‘the only democracy in the Middle East’ was heard.

On 29 December, Supreme Court Justice Asher Grunis denied Vanunu’s Appeal stating, “The restrictions are intended to prevent future dissemination of classified material. In recent years the court has examined the necessity of the restrictions several times, and each time has been convinced that they are necessary for state security. The evidence shown here, including the covert evidence, indicates that the plaintiff is still a source of classified information, and is not hesitant to disseminate the information.”

Vanunu told Eileen Fleming, “All the secrets I had were published in 1989 in an important book, by [Nuclear Physicist] Frank Barnaby, “The Invisible Bomb: Nuclear Arms Race in the Middle East.”

In 1986, Barnaby was hired by the London Sunday Times to vet Vanunu’s story and he testified at Vanunu’s closed door trial: “I found Vanunu very straightforward about his motives for violating Israel’s secrecy laws he explained to me that he believed that both the Israeli and the world public had the right to know about the information he passed on. He seemed to me to be acting ideologically.

We the undersigned petition the World Media to seek and report the truth about Israel’s Nuclear Deceptions and to Israel we say the only way Vanunu can harm ‘the only democracy in the Middle East’ is with Bad PR!