I’ve been doing radio for more than 40 years, first at the 50,000 WATT behemoth WLS AM in Chicago, and now at several stations around the country including now in Detroit on WNZK AM 690 and in Washington DC on AM 700 radio. American Arabs still continue to struggle to break into the mainstream news media but the good fight continues

I first got into radio in 1979 on WLUP FM when Chicago Mayor Jane Byrne attacked me at a press conference. Of course, she didn’t physically beat me with a bat, although she might have wanted to at the time.

I was the City Hall reporter for a community newspaper at the time, the Daily Southtown, and I had criticized Mayor Byrne, Chicago’s first woman mayor, in several of my columns. Criticism is a part of the political world and you get used to it, but politicians fight back.

So WLUP invited me to do commentaries on their radio show, which I did do. I then went to WLS AM Radio hosting 5-hour live shows on Saturday and Sunday mornings. It was a lot of fun.

But that was before the media realized I was a crazy American Arab. Once the mainstream media relized I wasn’t Italian or Puerto Rican, and discovered I was a loud-mouthed Arab – and, as Jackie Mason once gasped “a Palestinian!!!!” — The horror. The humanity. The Outrage. The media booted me out as fast and as hard as they could. Several colleagues, especially a few who happened to be Jewish, turned their guns on me because they knew that if an Arab American could break into journalism and write about being an Arab American, it might wake up the mainstream American people who are in a coma-induced headlock influenced by the sinister pro-Israel monolith.

Or, actually, they just didn’t like Arabs who were Palestinian and wanted to censor us by excluding us from the so-called professional journalism. So they would beat on me and attack me. Journalism and media columnists attacking me, and pretending they were objective. Excluding Arabs. Marginalizing Arabs. 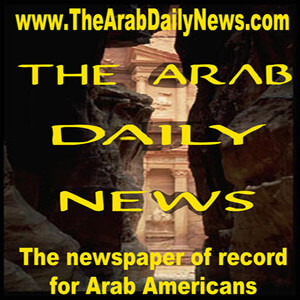 It was obvious that I had to build my own media empire from scratch, which is what I have done. Publishing my own newspapers. Exploiting the Internet and publishing this news website — 800,000 visitors on average each month — and hosting my on online TV and podcast interviews, and hosting radio shows.

We, American Arabs, can’t give up. We have to keep fighting the racism and discrimination that is the foundation of America and that fights hard to suppress our voices. We have a right to express our views, and our views are  the right views. American Arabs fight for justice, the Rule of Law and objectivity, all of the things that the mainstream news media tries to stop.

So, we have to do it ourselves.

So every 2nd Friday of the month I appear live on Detroit and Washington D.C. radio. You won’t read about it in Rob Feder’s column, or in the columns of other media writers. But it is out there and we have our audience and we pound away at the BS and garbage that passes as fact in this country challenging the stereotypes that are used to suppress our voices.

I’ll also be on Friday July 24, for a special show, too at 8 am EST, just in case you want to listen to the live broadcast. Or, you can get the podcast online at Rayhanania.podbean.com.

Detroit has a vibrant American Arab community and there are more than enough issues to address. I hope you tune in.

Here’s the latest podcast of Friday’s show (July 10, 2015.) Fuck the mainstream news media. They’re assholes. They’re biased, bigoted racists. They discriminate and they hate Arabs, especially Palestinians. But they are the minority. The majority of journalists are afraid to speak out or criticize this racist nature of the media profession.

But I won’t shut-up!