The American Arab Anti-Discrimination Committee (ADC) invites you back to our webinar series with a discussion on Amnesty International’s recent report.

The Zoom webinar will be held on Wednesday February 16th, 2022 at 12:00 PM ET/9:00 AM PT. We will be joined by Paul O’Brien, Executive Director of Amnesty International USA and Maen Hammad, Regional Campaigner with Amnesty International’s International Secretariat as a part of the organization’s Middle East and North Africa Regional Office. We will also be joined by Suha Salman Mousa, co-director and Jafar Farah, founder and general director from Mossawa, the Advocacy Center for Arab Citizens in Israel. The discussion will be moderated by ADC National Organizer, Jinan Shbat.

Amnesty International’s report is a groundbreaking, concise compilation of Israel’s human rights abuses over the past 74 years. This report has gained international attention, and many conversations have been centered around its contents. We look forward to welcoming you to a discussion on how the report was compiled, the political discourse, and what it means for the liberation of Palestine. 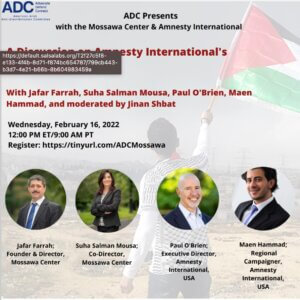 The Mossawa Center, an advocacy center for Palestinian Arab citizens of Israel, was established in 1999 to promote the economic, social, cultural, and political rights of the Palestinian Arab minority in Israel and the recognition of this community as a national indigenous minority with its own national, cultural, and historical distinctiveness. The Mossawa Center seeks to promote a democratic society and acts against all forms of discrimination.

Jafar Farah, founder and general director of the Mossawa Center, the Advocacy Center for Arab Citizens in Israel, is a long-time advocate and activist for the rights of the Palestinian Arab Citizens of Israel. As a community organizer and activist, Mr. Farah was involved in establishing several Arab non-governmental organizations, including I’lam, ACAP – the Arab Center for Alternative Planning, and the Follow-Up Committee for Arab Education. Prior to founding the MossawaCenter, Mr. Farah was a journalist and researcher for several years, working for the Haaretz net, several Arabic newspapers and TV programs.

Suha Salman Mousa is the co-director of Mossawa Center, the Advocacy Center for Palestinian Arab citizens of Israel, which promotes Palestinian Arab rights and a democratic society. She manages and develops Mossawa’s parliamentary, legal, international and media advocacy for advancing the rights of Palestinian Israelis. She also focuses on strengthening community work. In recent years, Suha has led the initiative to establish Friends of Mossawa in the USA, promoting the center’s work abroad.

Paul O’Brien is the new Executive Director at Amnesty International USA, based in Washington, DC. Previously, Paul was at Oxfam America. During the pandemic, Paul co-led Oxfam’s worldwide influencing network’s efforts to change government policies, corporate practice and public opinion. For the last decade, he oversaw Oxfam America’s advocacy with the US government and corporations. He has been an advisor to the President of Afghanistan, the Africa Policy Advisor for CARE, and an organizer in Nairobi’s informal urban settlements. He co-founded a community organizing institution in Kenya and a human rights research consortium in Afghanistan. He was the President of the Echoing Green Foundation, a litigator in New York for Cravath, Swaine and Moore. He has a JD from Harvard Law School and has published on power and rights for more than three decades. He recently published “Power Switch” How We Can Reverse Extreme Inequality.”

Maen Hammad is a Regional Campaigner with Amnesty International’s International Secretariat as a part of the organization’s Middle East and North Africa Regional Office. Maen holds a MA from the George Washington University’s Elliott School, where he specialized in conflict resolution and international law. Maen is based between Washington, D.C. and Ramallah.

Jinan Shbat is the ADC National Organizer and Palestinian rights activist. She mobilizes Arab-American communities nationwide while helping to bridge intersectional issues. She has been featured in several articles on community activism and Palestine. As a community activist for over 15 years, Jinan has worked with multiple communities on issues such as Palestinian human rights, intersectional activism, refugee rights, Arab American representation and the Arab/Muslim Ban.