Israel has taken two unusally broad measures this week as part of its ongoing efforts to forcibly transfer Palestinian communities in order to take over their land:

Yesterday, Monday, 1 February 2021, Israeli forces confiscated most of the residential structures and livestock pens in the community of Khirbet Humsah. The community was already demolished on 3 November 2020, while the world was focused on the US elections. Yesterday, the Civil Administration dismantled and confiscated the following equipment:

According to community residents, Civil Administration personnel arrived in the morning, before the confiscation began, and ordered them to relocate to the area of ‘Ein Shibli, west of the al-Hamrah Checkpoint. The forces then dismantled their tents and possessions and transferred them to the checkpoint, notifying the residents that they could get them back if they undertook to relocate to the designated site. After the residents refused to comply, the equipment was confiscated and put in Civil Administration storage.

To cover up the forcible transfer, military spokesmen tried to create the impression that the residents had “voluntarily agreed” to leave the area after “dialogue.” Yet when one side – Israel – has all power and can threaten defenseless Palestinians with demolition orders, bulldozers and weapons, consent is not on the cards. Rather, it is an act of coercion and violence by Israel’s apartheid regime, which advances the principle of Jewish supremacy by geographically and demographically engineering space.

Today, 2 February 2021, Israel launched a large-scale military maneuver set to last two to three days, in areas it has declared firing zones in the South Hebron Hills. The military has not trained in the area for at least seven years.

As in other parts of the West Bank, these areas were declared “firing zones” in order to drive local residents out of their homes and take over their land. Unlike the military, the local settlement council made no attempt to disguise theintention to expel Palestinians for alleged security reasons. In a statement sent to Jewish residents, it welcomed the training as “another way to increase governance and control over open space and to enforce law and order.”

After years of no military training in the area, the decision to conduct a broad maneuver there is part of Israel’s ongoing campaign to forcibly transfer Palestinians. The sudden urge to train in Masafer Yatta (South Hebron Hills) is hard to detach from the fact that a new US administration has just taken office. Is the Israeli government testing the waters to see how far it can proceed with its plans before being held accountable under the current administration?

The people who came up with the idea of expelling residents on the pretext of “military training” will not suddenly grow a conscience or stop the expulsion. Yetthe international community, and especially the new US administration, can – and should – make it clear to Israel that these actions will come at a significant cost. 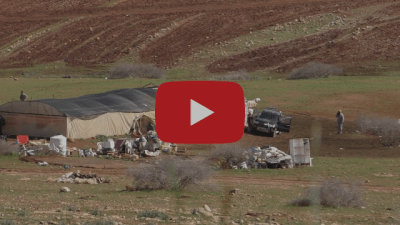