President Trump came under fire this week for a series of policy slips ranging from the mishandling of immigrant children to his administration’s rejection of the fundamental principles of human rights. Ironically, the mishandling and abuse of immigrant children at the border is in fact a human rights issues that Trump can no longer address. But how is he worse that Duckworth and the Democrats?

America’s racist UN Ambassador Nikki Haley announced this week that she was withdrawing the United States from the important United Nations Human Rights Council, while her boss President Trump closed his eyes to the suffering of immigrant children at America’s borders.

In other words, it’s wrong to withdraw from the United Nations Human Rights Council but it’s not wrong to close America’s moral eyes to the mass murders committed in Gaza by Israel’s military.

But according to Nikki Haley, the criticism of Israel’s murder of civilians more than 150 in the past six weeks and the maiming of more than 20,000 during the same period is not a human rights issue. The truth is that Haley represents a rejection of international human rights and an embrace of fascism, as long as fascism reflects her political agenda of protecting apartheid military regimes.

Like many Democratic officials who have attacked Trump, however, U.S. Senator Tammy Duckworth issued a statement that denounced Trump’s withdrawal from the UN Human Rights Commission but then shrieked in fright at the idea of criticizing — aghast! — Israel, a foreign country.

Duckworth is much like most of the Democrats who claim that Trump is a fascist extremist who is racist, sexist and discriminates against foreigners who enter the country illegally. The Democrats are the same or worse.

How can Duckworth attack Trump for withdrawing from the UN Human Rights Council and then defend Israel’s atrocities against Palestinian civilians in the Gaza Strip who have been killed by Israeli soldiers hiding behind bunkers on Israel’s side of the border with Gaza using high powered rifles? All of the civilians killed, more than 150 in the past eight weeks, have been killed while protesting on the Gaza side of the Israeli border.

Among those killed intentionally by Israeli soldiers who scoped them out and fired single bullets into the victim’s heads were a dozen children and one female nurse who was treating some of the more than 20,000 civilians who have injured or maimed by the carnival-like killing atmosphere Israel’s government has created along the border.

Israeli civilians actually bring lunch and picnic blankets and sit on their side of the border and cheer each time a Palestinian’s head explodes in blood when hit by an Israeli high powered sniper shot.

Here is Duckworth’s hypocritical statement, suggesting that she is no better than Trump and that her protests are in fact worse because she claims the moral high ground over Trump:

In response to the Trump Administration’s announcement that they are withdrawing from the United Nations Human Rights Council one day after it criticized Donald Trump’s inhumane policy of separating asylum-seeking parents from their children, U.S. Senator Tammy Duckworth (D-IL) released the following statement:

“The United States has long been the world’s conscience, playing a leading in role in promoting human rights around the globe. Under Donald Trump, that is clearly no longer the case. Our President embraces dictators and tyrants who have murdered and abused their people. He elevates officials in our government who authorized and enabled the indefensible and illegal use of torture. Now, his administration is withdrawing from the UN Human Rights Council one day after it criticized Trump’s inhumane policy of tearing thousands of families apart and intentionally inflicting trauma on children and parents seeking asylum.

“We know the UN Human Rights Council is far from perfect. It has long ignored the human rights abuses of its members and I have been critical of its mistreatment of our ally, Israel. But America withdrawing from the council does not make the world a better place, it only reduces our nation’s ability to affect change and improve the conditions of the people living under oppressive regimes. This decision also causes further damage to our country’s standing and sends another signal that we have abandoned the values that made America the envy of the world.”

The horrendous obscenity of a regime ripping children from their parents, put in cages, or locked up in tent cities; the demonization, criminalization, and hunting down of immigrants across the country; vilifying them as “animals”; and denying asylum even to women who are fleeing domestic abuse and battery:

ALL THIS HAS GOT TO STOP and it has got to STOP NOW. Everyone with a conscience and any humanity should join or organize protests NOW.

No one can say they didn’t know. Anyone who sits back and accepts this cannot ask how the German people accepted Hitler and the Nazis. This assault on immigrants is a linchpin and battering ram for a whole fascist program, concisely identified in the RefuseFascism.org Call to Action: “‘Make America Great Again’ is a 21st century fascist program of Manifest Destiny— ‘America First’— wrapped in the flag and Mike Pence’s Bible taken literally, with a program of white supremacy, misogyny, and xenophobia.”

Waiting for Mueller or the elections ignores the determination of these fascists to shatter these normal channels. Waiting means thousands more children stolen from desperate parents! Waiting til November means losing our humanity! 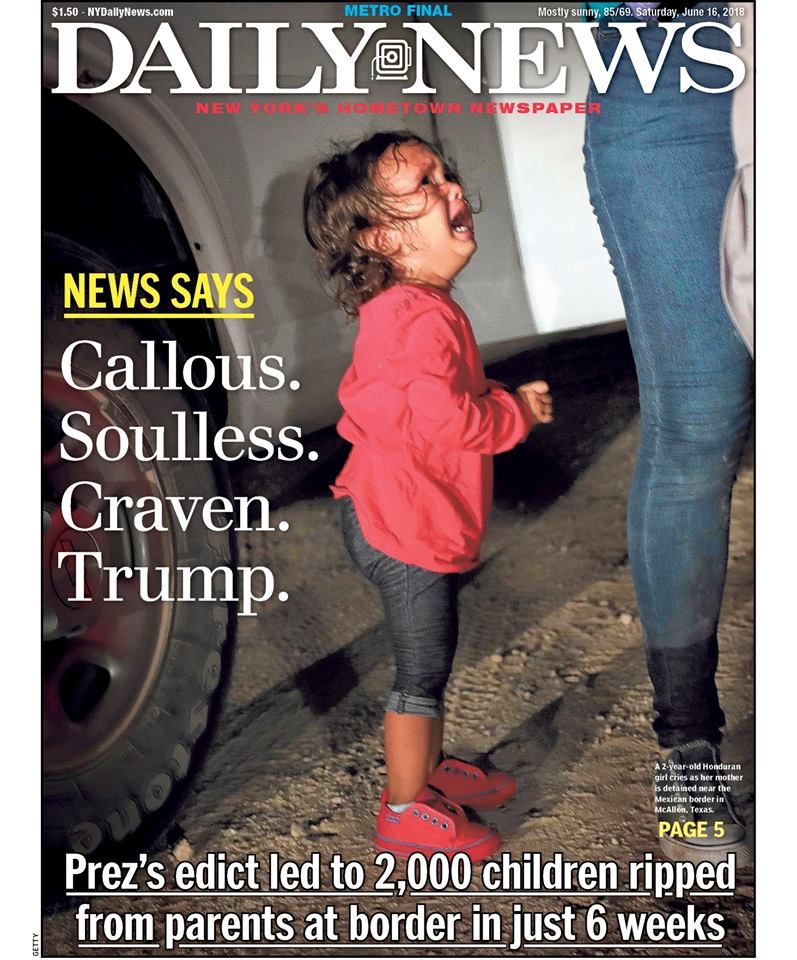 RefuseFascism.org is for EVERYONE coming from diverse political perspectives who refuses to accept a fascist America. We recognize that: ONLY the people can stop this nightmare through mass, determined and sustained non-violent political protest and resistance.

In the Name of Humanity,
We REFUSE to Accept
a Fascist America!

This Nightmare Must End:
The Trump/Pence Regime Must Go!

Dearborn Mayor O’Reilly, Thank you for all you have done Bloggers