The second season of “The Ray Hanania Show” live radio will launch on Wednesday, April 6 featuring a focus on Ramadan and a new law passed in Minneapolis that permits the Adhan from the city’s mosques between 7 AM and 10 PM.

Hosted by the U.S. Arab Radio Network and radio president Laila Alhusini, the radio show will broadcast on 4 radio stations in the following communities every Wednesday afternoon at 5 PM.

The one-hour live program will be rebroadcast in Chicago on Thursdays at 12 noon on WNWI AM 1080 which covers the Chicagoland region and Northwest Indiana.

The show is sponsored by Arab News Newspaper, the leading English language newspaper in the Middle East.

The Ray Hanania Show and U.S. Arab Radio Network are the only major radio programs that speak to the issues facing Arab Americans and Muslims Americans.

Hanania is an award winning journalist and opinion columnist who began his career publishing “The Middle Eastern Voice,” an English language newspaper covering the Chicagoland region from 1975 through 1977. In 1977, Hanania was hired by the Daily Southtown to cover Chicago City Hall from and in 1985 continued City Hall political coverage and opinion column writing for the Chicago Sun-Times.

Hanania is currently the U.S. Special Correspondent for Arab News Newspaper which is based in Saudi Arabia and publishes a print newspaper in Saudi Arabia, Dubai, Tokyo, Japan, Paris, France, Pakistan and manages online bureaus in London, Washington D.C., New York at the United Nations, and Chicago.

Ray Hanania’s writings are recognized by the nation’s most professional & prestigious journalism organizations. 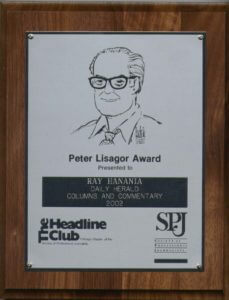 M.T. MEHDI NATIONAL COURAGE IN JOURNALISM AWARD
Awarded by the Mehdi Foundation and the Mehdi Family
May 2009

EXCELLENCE IN JOURNALISM AWARD
The Suburban Chicagoland Press Club for service as Board President and for Excellence in Journalism, 1988

“Ray Hanania, a former Creators columnist who’s now self-syndicated, is a Palestinian-American writer married to a Jewish woman. He writes about Mideast issues in an evenhanded way that makes him seem positively radical in a sea of columnists who back Israel almost unconditionally. Hanania’s approach, as former President Jimmy Carter discovered with his latest book, is not popular with much of the mainstream media. But it would be interesting if U.S. dailies followed the lead of Israeli newspapers in allowing a much wider spectrum of debate about Mideast issues. By the way, Hanania is also a stand-up comedian who’s hilarious when he opts to use humor.”

You can also listen online at ArabRadio.US

And you can watch the radio show by visiting Arab News Facebook Page at Facebook.com/ArabNews

Palestinians should accept and build on Trump’s peace plan  Bloggers