President Obama’s timely declassification of this 1987 report on Israel’s Nuclear Weapons Program and Aljazeera’s SPY CABLES  must be the final straw to force USA Media and Congress to end their cooperation in Israel’s Nuclear Deceptions and State torture of Mordechai Vanunu. 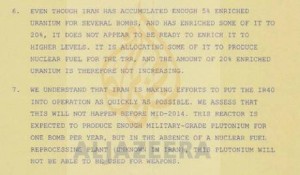 Besides accusing the prime minister of endangering the country’s security with his stance on the Iranian nuclear program, Dagan said:

The person causing the most strategic harm to Israel on the Iranian issue is the prime minister.

As someone who has served Israel in various security capacities for 45 years, including during the country’s most difficult hours, I feel that we are now at a critical point regarding our existence and our security.

Our standing in the world is not brilliant right now. The question of Israel’s legitimacy is up for debate. We should not erode our relations with our most important friend. Certainly not in public, certainly not by becoming involved in its domestic politics. This is not proper behaviour for a prime minister.”

I have no personal issue with the prime minister, his wife, his spending and the way he conducts himself. I’m talking about the country he leads.

An Israeli prime minister who clashes with the US administration has to ask himself what the risks are. On the matter of settlements, there is no difference between the two [US] parties. And even so, they provide us with a veto umbrella. In a situation of a confrontation, this umbrella is liable to vanish, and within a short time, Israel could find itself facing international sanctions.

The risks of such a clash are intolerable. We are already today paying a high price. Some of them I know and cannot elaborate…

Dagan ended his tenure as the head of Mossad in 2011. He shares the prime minister’s view over the risk of a nuclear Iran and is regarded as hawkish on defense and security.

This recently declassified 1987 report on Israel’s Nuclear Weapons Program exposes how well informed the US Government was about Israel’s WMD Facility and its nuclear agenda by [if not before] the 1980’s.

The decades-old Defense Department reports on U.S. government’s assistance to Israel in the development of its nuclear weapons.
This report states the Israelis are “developing the kind of codes which will enable them to make hydrogen bombs. That is, codes which detail fission and fusion processes on a microscopic and macroscopic level.”

“However, they were producing amounts of radioactive substances that could only serve that goal: manufacturing nuclear weapons. They were significant amounts. I calculated that at that time, in 1986, they already had 200 atomic bombs.

“They had also started to manufacture hydrogen bombs, very powerful ones. So I decided to reveal what they were secretly doing. I also wanted to prevent the Israelis from using atomic bombs and to avoid a nuclear war in the Middle East. I wanted to contribute to peace in the region.”

I saw Vanunu for the last time in Nov. 2013. He told me a reporter from CNN had recently asked him for an interview but Vanunu declined because “everything is already on the Internet.”

Vanunu’s 1985 photos of Israel’s WMD Facility at Dimona broadcast by Israeli TV in 2004:

Vanunu speaks about the “Israeli Occupation of US government and media” and the “real Wailing Wall-the Apartheid Wall” a few weeks after his FREEDOM of SPEECH Trial began in 2006 because he spoke to foreign media in 2004!

Beyond Nuclear: Mordechai Vanunu’s FREEDOM of Speech Trial and My Life as a Muckraker 2005-2010 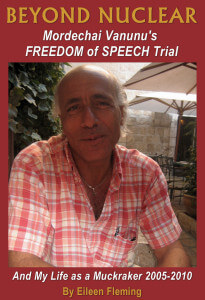 Sign the Petition to World Media and Israel: We are not free, until Vanunu is free!