Israel’s internal Security Agency is best known by the acronym Shabak or Shin Bet and is similar to the FBI.

This report argues Israel’s Nuclear Whistleblower’s cases of libel and extortion against them by way of definition:

Libel is defamation by written words which becomes a criminal act when published.

Extortion is the crime of obtaining money by the abuse of one’s office or authority.

On Sunday, Mordechai Vanunu emailed a few friends from the UK, Australia and USA: 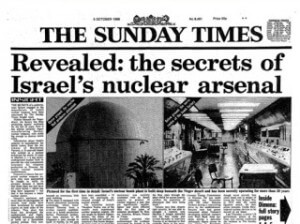 Mordechai Vanunu sued Yedioth Ahronoth [Israel’s largest newspaper by way of sales and circulation] over a front-page lead article it published in November 1999 [while Vanunu was in his 13th year behind bars for telling London’s SUNDAY TIMES everything he knew as a mid-level technician within Israel’s WMD Facility at Dimona.]

The article was never verified and neither the reporter nor Yedioth Ahronoth asked Vanunu for his response to the claim of the Shin Bet.

The reporter of the piece was Ben Yishai who admitted the information he received came from Ami Ayalon, a head of the Shin Bet security services who spread the the story to a group of nearly a dozen journalists at the end of 1999.

Five months after that meeting Ben Yishai published the only article furthering the fabrication which coincided with Vanunu’s request for an early release from 18-years behind bars. 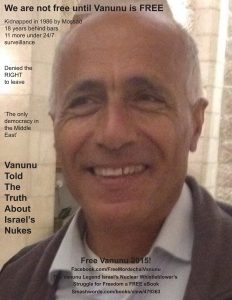 Not only was Vanunu denied an early release from prison, the restrictions denying him the right to leave Israel have been renewed every six months or so—the latest to expire at the end of May 2015.

Vanunu concluded his March 22nd email explaining that his Lawyer Feldman and the Lawyer for the Newspaper agreed to reduce the amount Vanunu ‘owes’ to 10,000 USA dollars!

Vanunu wrote, “So now I have to pay this amount before any future leaving Israel, any help from you are very welcome.”

I emailed Vanunu to ask permission to publish his email HERE and Vanunu replied, You can publish it with this indiegogo.

Vanunu’s Indiegogo campaign ends on April 21st which coincides with Vanunu’s 2004 release from 18 years behind bars to 24/7 surveillance and ongoing struggle to leave ‘the only democracy in the Middle East.’

Be a friend to Vanunu:

Sign and Share the Petition to World Media and Israel: We are not free, until Vanunu is free! 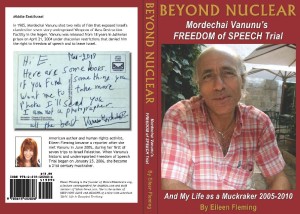 Donate generously to Vanunu’s cases of Israeli libel and extortion

Tipping and Bargaining in Egypt: Bakhshesh or Sadaqa Abdennour Toumi