U.S. Congress established Loyalty Day as an official holiday in 1958 with the signing of Public Law 85-529

Loyalty is the quality of being loyal to someone or something accompanied by a strong feeling of support or allegiance.

According to the U.S. Code, Loyalty Day celebrates “the reaffirmation of loyalty to the United States and for the recognition of the heritage of American freedom.”
Loyalty Day was established as a counter to the 19th century May 1st celebrations held by socialists and communists in support of International Workers’ Day.

In his first 100 days POTUS Donald J. Trump approved the Keystone XL and Dakota Access pipelines, gutted the EPA, is planning to withdraw the U.S. from the Paris Climate Agreement and he has issued two-travel bans against Muslims. Mr. Trump has also attempted to take away health insurance coverage from millions and defund Planned Parenthood.

Trump’s one-page tax plan proposal is laughably light on details and painfully clear that trillions will be diverted to the Trump Family and only onto others who are among the wealthiest among US!

On his 99th day as POTUS, Mr. Trump released his Loyalty Day Proclamation: 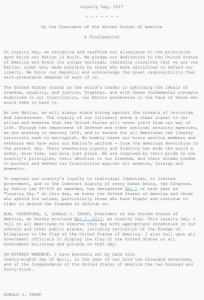 We humbly thank our brave service members and veterans who have worn our Nation’s uniform from the American Revolution to the present day. Their unwavering loyalty and fidelity has made the world a safer, more free, and more just place. We are inspired by their pride in our country’s principles, their devotion to our freedom, and their solemn pledge to protect and defend our Constitution against all enemies, foreign and domestic.

POTUS Trump called to all Americans to observe Loyalty Day with ceremonies in public places.

THIS PLACE serves to express my loyalty to today’s service members and in particular I cite my strong feeling of support and allegiance to the crew of the USS LIBERTY.

The veterans of the USS LIBERTY have exemplified an unwavering loyalty, fidelity and devotion to our freedom against all enemies, foreign and domestic for over 50 years;

But they have been DISHONORED by every President and Congress since LBJ who set the precedent of refusing to “embarrass an ally” by telling the truth!

LBJ also called back the rescue planes and instead of directing the USS LIBERTY to close harbor -a few hours away- the USS LIBERTY and its traumatized crew were ordered to shut up about their experiences and limp to Malta, which took enough days to establish a treasonous Cover-Up of Israel’s 8 June 1967 attack on the USS LIBERTY.

President Obama’s 2016’s Loyalty Day statement was a call to action for citizens to make “our society more just and more equal, our work to fulfill our country’s potential has always relied on our willingness to see ourselves in our fellow citizens.”

Mr. Trump’s Loyalty Day proclamation called upon Americans to “honor our Republic and acknowledge the great responsibility that self-governance demands of each of us.”

Signed paper copies of THIS PETITION will be handed over to the USS LIBERTY Veterans Association:

Who may choose to bypass Congress and deliver them directly TO:

With a sincere request he sign an Executive Oder establishing every June 8 to be known as USS LIBERTY REMEMBRANCE DAY,

Because every Executive Order must be addressed by Congress!

The crew of the USS Liberty is the most decorated crew since World War II and among the most decorated for a single engagement in the entire history of the United States Navy. Virtually unarmed, the American navy ship was attacked by Israeli planes and torpedo boats on June 8, 1967 leaving 34 US Sailors and Marines dead and 174 more wounded. Yet, the attack has never received a full investigation, as required by law.

The Independent Commission of Inquiry, having undertaken an independent investigation of Israel’s attack on the USS Liberty, including eyewitness testimony from surviving crewmembers a review of naval and other official records, an examination of official statements by the Israeli and American governments, a study of the conclusions of all previous official inquiries, and a consideration of important new evidence and recent statements from individuals having direct knowledge of the attack or the cover up, concluded that there was compelling evidence that Israel’s attack was deliberate and ‘Israel committed acts of murder against American servicemen and an act of war against the United States.’

WHEREUPON, we, the undersigned, in order to fulfill our duty to the brave crew of the USS Liberty and to all Americans who are asked to serve in our Armed Forces, hereby call upon the Department of the Navy, the Congress of the United States and the American people to immediately take the following actions:

THIRD: That the eighth day of June of every year be proclaimed to be hereafter known as “USS LIBERTY REMEMBRANCE DAY, in order to commemorate the Liberty’s heroic crew and to educate the American people of the danger to our national security inherent in any passionate attachment of our elected officials for any foreign nation.”  -Your Name  HERE

How do you explain a newspaper to today’s youth? Baby Boomers

New book: I was a French Muslim by Mokhtar Mokhtefi Arab World