It took Ken Burns and Lynn Novick 10 years to unbury the secrets of the Vietnam War and produce a 10-part 18-hour series premiering on PBS, beginning Sept. 17.

Unlike Burns’s “The Civil War” and “The West,” the Vietnam War took place within memory of many Americans. Debates about the conduct of those who fought the war and those who opposed are still raw, intensely personal and nationally disputed.

“The Vietnam War” by Burns confronts our divisions as our republic today confronts a profound debate about what it means to be an American as we ponder where are we heading.

Burns has trumpeted the idea that America’s greatness lies not in our past, but in our ability to learn the lessons of history.

What makes “The Vietnam War” so compelling is the way it confronts the audience, refusing to resolve an agonizing period in history into a convenient story that places this era safely in the past. And what makes this moment important for Burns is the opportunity it presents for him to employ his credibility with the public not just to put together a searching documentary about America’s history but also to make a forceful argument about its future…

After “The Civil War,” Burns had been reluctant to make another war series. It had been draining to immerse himself in the wrenching stories of that conflict, and Burns was pained by those he hadn’t been able to tell. The idea that many World War II veterans were dying before their stories had been recorded — and the fact that “too many graduating high school seniors thought we fought with the Germans against the Russians in the Second World War,” Burns says — propelled Burns and Novick into “The War.”

For Burns, that series was an exercise in shedding preconceptions, a useful prelude to what he calls the “daily humiliation and the humbleness” of relearning the history of the Vietnam War… 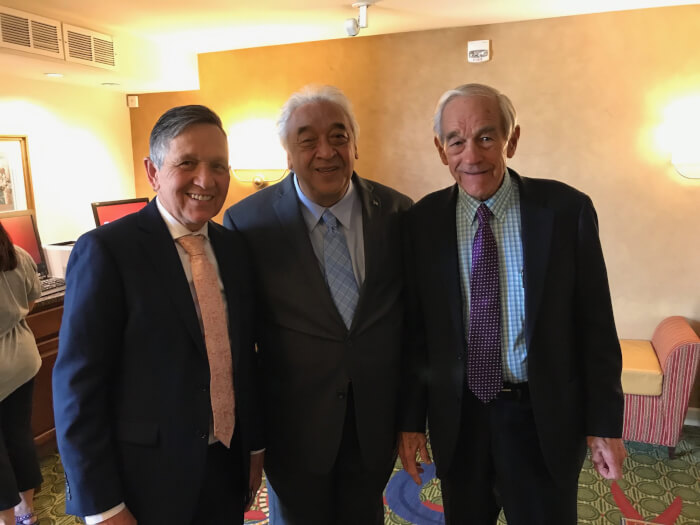 Relearning the history of Vietnam requires learning about President Lyndon Baines Johnson’s treasonous cover-up of Israel’s June 8 1967 attack on the USS Liberty as she navigated in international waters.

On September 9th at the Washington Dulles Airport Marriott the Ron Paul Institute held its second major foreign policy conference. Dr. Paul spoke about his new book — a penetrating look at his Liberty Movement ten years on – with the focus on the future and the need to make connections and taking action to promote a Peace and Prosperity agenda. Whistleblowers and patriots filled the room and spoke from the podium.

Ken Ladd, a man of action with many connections is pictured [above] in the middle of Dennis Kucinich, who served in the U.S. House of Representatives [1997 – 2013] and Ron Paul author, physician, and former politician at the “PEACE and PROSPERITY Conference.”

Ladd gifted Kucinich and Paul with hot off the burner copies of “We Americans and the USS LIBERTY” DVD, in which Ladd also provides the original music and introductory visual montage.

USS Liberty Marine Sgt. Bryce Lockwood spearheaded the passing of American Legion Resolution 40 at their National Convention in Reno, Nevada, which concludes, “The American Legion calls upon the 115th United States Congress to publicly, impartially, and thoroughly investigate the attack on the USS Liberty and its aftermath and to commence its investigation before the end of 2017, the 50th anniversary year of the attack.”