Children with PTSD in Gaza: AIPAC and MLK in USA

Palestinian health officials report that since Israel’s Operation Protective Edge began on July 8th, more than 1,900 people including at least 450 children have been killed.

More than 9,000 civilians including at least 3,000 children have been wounded overwhelming Gaza’s medical system, which has also endured seven years of blockade by Israel and Egypt.

According to United Nations Relief and Works Agency/ UNRWA, Gaza’s 25 hospitals have a total of 2,047 beds, or 1.3 beds per 1,000 people, among the lowest ratios in the world.

The U.N. agency that looks after Palestinian refugees reports nearly a third of the hospitals were damaged in the recent fighting between Israel and Hamas.

Thousands- many with severe wounds-have been discharged to the care of their devastated families or to U.N.-run schools packed with displaced people.

Dr. Mona al-Fara is haunted by a 3-year-old girl who arrived at her Gaza clinic with head injuries named “Anonymous No. 6” because there had been five others before her in the same situation. Dr. Mona told the New York Times:

I’m worried about this generation, what memories are in their mind, what will happen after a few years.

No matter what you ask the children to draw, the drawings will come back with blood. 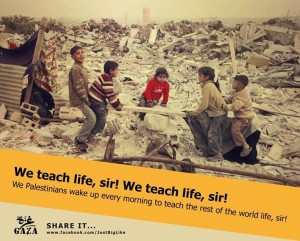 Dr. Jesse Ghannam, a clinical psychologist working for UNRWA, reports the rate of Post-Traumatic Stress Disorder among children has doubled since Israel’s Operation Pillar of Defense attack in 2012.

The UN’s Educational, Scientific and Cultural Organization recently stated that about 75% of teachers at primary and secondary levels reported a decline in their students’ academic performance since Operation Pillar of Defense in 2012.

Nine year olds in Gaza have witnessed three Israeli attacks on their neighborhoods and have spent their entire lives caught in the crossfire of terrorizing violence.

Militant extremists will recruit these traumatized children to mirror their oppressors by engaging in more inhumane violence.

These children are unable to have normal lives and development—besides the psychological trauma and lack of resources—because their identity is not fostered in a normal, healthy way.

One of the most notable theories of development comes from Erik Erikson, who developed the 8 stages of psychosocial development. The nine-year old survivors of the Israeli offenses in Gaza, for instance, would be in Erikson’s stage of Industry vs. Inferiority.

This is a crucial stage of human development, but these children will not be able to surpass this stage and continue to develop in a healthy manner.

The Industry, which we can compare to the Israeli militant forces, dominate over the Palestinians.

The children of Gaza who have lost everything—while never really having anything—are robbed of their dignity and the right to a stable life and identity of self.

The Congressional Research Service’s “U.S. Foreign Aid to Israel,” dated April 11, 2014, reports the Obama Administration gave $3.1 billion in Foreign Military Financing for Israel for the Fiscal Year 2014. In addition, the U.S contributed $504 million to the joint U.S.-Israel Missile Defense Program during FY 2014. If we include that number, American taxpayers give Israel $9.9 million per day.

According to the CRS report, President Obama’s request for Israel for 2015 will encompass approximately 55% of total U.S. foreign military financing worldwide.

In his “Beyond Vietnam” speech delivered at New York’s Riverside Church on April 4, 1967 [a year to the day before he was murdered] Martin Luther King, Jr. called the United States “the greatest purveyor of violence in the world today.” 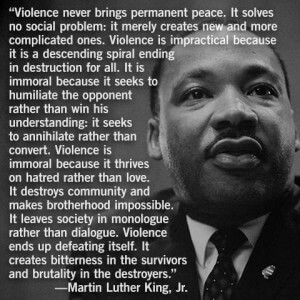 Somehow this madness must cease. We must stop now…
I speak for those whose land is being laid waste, whose homes are being destroyed, whose culture is being subverted…
I speak as a citizen of the world, for the world as it stands aghast at the path we have taken.
I speak as an American to the leaders of my own nation.
The great initiative in this war is ours.
The initiative to stop it must be ours.-The Trumpet of Conscience, 1967

A nation that continues year after year to spend more money on military defense than on programs of social uplift is approaching spiritual death.-Where Do We Go from Here: Chaos or Community? 1967

Nonviolence is the answer to the crucial political and moral questions of our time: the need for man to overcome oppression and violence without resorting to oppression and violence. Man must evolve for all human conflict a method which rejects revenge, aggression and retaliation. The foundation of such a method is love.- Nobel Peace Prize acceptance speech, December 11, 1964

Fyodor Dostoyevsky wrote, “Love in action is a harsh and dreadful thing compared to love in dreams.” -The Brothers Karamazov.

During the 2012 Presidential elections, The Washington Report on Middle East Affairs compared the sameness of the Democrat and Republican platforms:

GOP:  The U.S. and Israel “speak the same language of freedom and justice”

GOP: “The security of Israel is in the vital national security interest of the United States”

DEMS:  “A strong and secure Israel is vital to the United States”

GOP: “Palestinian people must support leaders who reject terror, embrace the institutions and ethos of democracy, and respect the rule of law.”

GOP:  “We call on the new government in Egypt to fully uphold its peace treaty with Israel”

DEMS: “We will continue to support Israel’s peace treaties with Egypt and Jordan”

GOP: “We call on Arab governments throughout the region to help advance [the] goal [of peace]”

DEMS: “President Obama will continue to press Arab states to reach out to Israel”

GOP: “We support Israel’s right to exist as a Jewish state with secure, defensible borders; and we envision two democratic states—Israel with Jerusalem as its capital and Palestine—living in peace and security”

Dems: “Jerusalem is and will remain the capital of Israel…The parties have agreed that Jerusalem is a matter for final status negotiations. It should remain an undivided city accessible to people of all faiths”

It is right to comprehend the children of Gaza are innocent victims who have been terrorized because our one small World is heavy with artillery and leaders who do not lead according to good Conscience but who follow the pack- and in the USA the pack is AIPAC.

Is Syria revival about “boots on the ground?” American Arabs

Haaretz Headline: Trump Has His Finger on the Nuclear Button, and No One Can Stop Him Arab World

The beauty of Baladi under the ugly occupation American Arabs