On Wednesday The National Security Archive of George Washington University published documents corroborating much of what Israel’s Nuclear Whistle Blower Mordechai Vanunu has been saying for twenty-nine years.

The documents detail the discovery of Israel’s nuclear deceptions, debates over Israel’s lack of candor and efforts to pressure the Israelis to answer key questions about the Dimona during the Eisenhower years.

This ‘discovery,’ which came as the presidency of Dwight D. Eisenhower was drawing to a close, caused apprehension in Washington by raising concern about regional stability and nuclear proliferation, but it also produced annoyance because Israeli officials at all levels repeatedly provided less than credible answers to U.S. questions about Dimona.

Thus, in September 1960, when embassy officials asked about a new construction site when they were on a helicopter ride nearby, an adroit Israeli official, Addy Cohen, improvised a story to keep the secret: it was the site of a textile factory, he said; a story that was not wholly false because there was a textile plant near Dimona.

Youtube interview with 87 year-old Addy Cohen, who wrote on March 5, 2015: “It may have transpired that I was the first one who referred to the project as a ‘textile plant’ but I can assure you that it was not planned.”

Did you know that President Kennedy tried to stop Israel from building atomic weapons?

In 1963, he forced Prime Minister Ben Guirion to admit the Dimona was not a textile plant, as the sign outside proclaimed, but a nuclear plant.

The Prime Minister said, ‘The nuclear reactor is only for peace.’

Among the documents are the June 1959 Israel-Norway secret agreement providing for the sale of Norwegian heavy water to Israel [through the United Kingdom], transmitted by Oslo Embassy political officer Richard Kerry, the father of Secretary of State John Kerry.

“Plutonium Production for Weapons Is At least One Major Purpose”

On the basis of intelligence collected during the summer and fall of 1960 (of which much remains classified)…Israel is engaged in construction of a nuclear reactor complex in the Negev near Beersheba.

Acknowledging that there could be various ways to interpret the function of the Dimona complex, the authors believed that ‘on the basis of all available evidence’ that ‘plutonium production for weapons is at least one major purpose of this effort’ and ‘that Israel will produce some weapons grade plutonium in 1963-64 and possibly as early as 1962.’

“Vanunu told the world that Israel had developed between one hundred and two hundred atomic bombs [in 1986!] and had gone on to develop neutron bombs and thermonuclear weapons. Enough to destroy the entire Middle East and nobody has done anything about it since.”

On 9 December, Secretary of State Herter summoned Israeli ambassador Avraham Harman to the State Department and showed him photos of the Dimona reactor, asking for an explanation that would remove ‘bases for concern.’

Harman said he knew nothing of the project but would inform his government. Later that afternoon, Herter called Claude Lebel, the chargé d’affaires at the French embassy, and asked about French involvement in the project.

Herter prefaced his question by referring to a report he had received from his embassy in Tel Aviv that Prime Minister Ben-Gurion was about to announce that a new experimental reactor had been built in the Negev with French aid.

Herter noted that, according to information the United States had ascertained, Israel had been involved since 1958 in constructing a reactor ‘which is at least ten times as large as claimed,’ and that the design appeared to be not for power but for plutonium production, hence, it would provide Israel ‘considerable weapons potential.’

Everything inside was written in French, when I was there…the Dimona descended seven floors underground.

In 1955, Perez and Guirion met with the French to agree they would get a nuclear reactor if they fought against Egypt to control the Sinai and Suez Canal. That was the war of 1956.

Eisenhower demanded that Israel leave the Sinai, but the reactor plant deal continued on.

Excerpted from Document 18: Israel had “By No Means Come Clean with Us”

Under Secretary of State Merchant briefed Assistant Secretary Lewis Jones about an Operations Coordinating Board [OCB] discussion of the Israel nuclear problem where Allen Dulles had grumbled that Israel had ‘by no means come clean with us.’

The participants were also annoyed that the Development Loan Fund (DLF) had authorized a loan to Israel despite the OCB’s agreement that such action should be delayed.

Such efforts, however, were not to reach the press and any initiative should be ‘conducted quietly through diplomatic channels.’

Excerpted from Document 20: “The Possibility of [It] Embarrassing the Government”

On 30 December, political officer Richard Kerry obtained a copy of the agreement which he believed could be embarrassing to the Norwegian government in light of its efforts to play the role of ‘honest broker’ in international conflicts, including the Middle East.

Kerry did not mention the British role in the affair…

This telegram, originally published in the FRUS in an excised version, showed how unhappy the State Department was with Ben-Gurion’s explanation of the Dimona reactor: his answers ‘appear evasive.’

The State Department saw the ‘clearly apparent lack of candor [as] difficult to reconcile with [the] confidence which had traditionally characterized U.S.-Israel relations.’

To restore confidence, Israel needed to answer questions about its plans to dispose of plutonium, the application of safeguards to plutonium produced, visits by IAEA or other scientists to the reactor site, and whether there were plans to build a third reactor. Moreover, ‘can Israel state unequivocally that it has no plans for producing nuclear weapons?’

Excerpted from Document 23: “Damaging Air of Secrecy or Suspicions”

Believing that neither France nor Israel had been forthright and that the lack of candor had damaging implications for Middle East stability, Herter asked U.S. Ambassador Amory Houghton to meet with Couve de Murville and discuss his earlier statement about the French-Israeli nuclear project.

If the Dimona project is a ‘large scale production reactor,’ the French need to be ‘unequivocally clear that [their] assistance is directed solely to peaceful uses.’

Excerpted from Documents 27A-B: The Post-Mortem

This ‘post-mortem’ study on SNIE 100-8-60 is one of the most intriguing documents in this collection.

Its aim was to explain why the US intelligence community had failed to detect in real time the Israeli nuclear project, and indeed how late it was in making that determination.

The chronology, on pages 8 through 17, provides an account of what was known, and when, about the Israeli nuclear program, concluding that Washington might have seen through Israeli ‘secrecy or deception’ and better understood Israeli intentions at least a year earlier if the ‘atomic energy intelligence community had properly interpreted’ the available information.

In essence, the overall conclusion was that the root cause of the delay was not so much the absence of information as that some important reports and items of information had been lost in the shuffle and the dots not properly connected…

Here you can see Apr’21/2004,how israel are stage managed my getting out of prison,like evry thing is under their control,But now after 11 years in East Jerusalem.How they are going to end this story…

Israel’s Nuclear Whistle Blower, Mordechai Vanunu was the first to imagine a Nuclear FREE World and do something about it.

But Corporate Media has FAILED to report and Politicians FAIL to Tell the Truth about Israel’s nukes nor hold Israel to the same standards as any other state in the world;

So, we the people of the world call on America and every Member State to honor their obligations under the NPT and UNIVERSAL DECLARATION of HUMAN RIGHTS;

Whereas, the International Court of Justice found that the destructive power of nuclear weapons cannot be contained in either space or time, and that they carry the potential to destroy all civilization and the entire ecosystem of the planet,

Whereas, Governments have obligations and People have rights, and the nuclear threat attacks every core concept of human rights,

Whereas it is a basic human right to be free of threat or violence, and it is the duty of adults to protect children and future generations, we the people of the World unequivocally demand all Governments of the World to pursue a Nuclear FREE World and clean up the chemical and radioactive contamination which have polluted Our World, 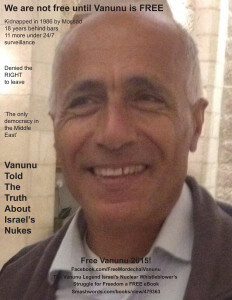 The Battle for Jerusalem: The Struggle for Justice, Truth and Liberty Activism