Six Palestinian prisoners are currently on hunger strike to protest their administrative detention:

Kayed Fasfous, 32, a father of a seven-year-old from Dura, has been on hunger strike for 118 days. He is in hospital as the lengthy strike has caused his health to deteriorate.

Miqdad Qawasmeh, 24, from Hebron, has been on hunger strike for 111 days. He is in hospital as the lengthy strike has caused his health to deteriorate.

‘Alaa al-A’araj, 34, a father of a five-year-old from Tulkarm, has been on hunger strike for 93 days. He is treated alternately in the infirmary at Ramla Prison and in hospital, as the lengthy strike has caused his health to deteriorate. 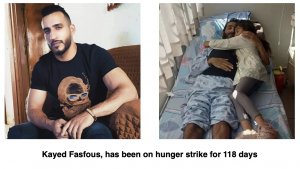 Hisham Abu Hawash, 39, a father of five from Dura, has been on hunger strike for 84 days. He is treated alternately in the infirmary at Ramla Prison and in hospital, as the lengthy strike has caused his health to deteriorate.

‘Ayad al-Harimi, 28, from Bethlehem, has been on hunger strike for 48 days. He has been transferred from Ofer Prison to the infirmary at Ramla Prison, as the lengthy strike has caused his health to deteriorate.

Luai al-Ashqar, 45, a father of eight from Saida, has been on hunger strike for 30 days. He is detained in Megiddo Prison.

Kayed Fasfous, has been on hunger strike for 118 days.

Israel has created a Kafkaesque legal reality for Palestinians, imprisoning hundreds without trial for an indefinite period of time on the grounds that they intend to commit a future offense. Israeli judges, who are supposed to review the administrative detention orders, approve the vast majority of them, merely lending the proceedings a veneer of respectability and a semblance of judicial oversight. 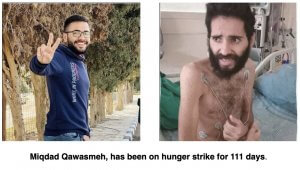 The government, senior military commanders, the Israel Security Agency, the Military Advocate General’s Corps, the State Attorney’s Office, the military judges and the Supreme Court justices – are all implicit in maintaining this policy and are the ones responsible for its implementation.

Miqdad Qawasmeh, has been on hunger strike for 111 days.

In early November 2021, according to figures the Israel Prison Service provided HaMoked, Israel was holding 482 Palestinians, four of them minors, in administrative detention. A hunger strike is almost the only way these detainees can oppose their incarceration. According to the Palestinian Prisoners’ Club, since the beginning of 2021, 60 Palestinians have gone on hunger strike to protest their administrative detention by Israel.

The United States and the Democratic Transition in Sudan Arab World