The American Human Rights Council will host its annual Spirit of Humanities Gala Dinner on December 4, 2020 at the Greenfield Manor Banquet Hall in Dearborn. 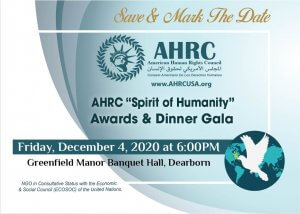 The American Human Rights Council (AHRC-USA) is gratified and truly honored to receive the United Nations- ECOSOC Consultative Status approved in its session held on July 24, 2018. This recognition is important to the work of AHRC. The Consultative Status will enable AHRC to actively engage with the ECOSOC and its subsidiary bodies. This honor will advance the mission on human rights within the nonprofit 501(C)-3 status of AHRC.