Refugees who have fled famine and violence and resettled in the US too often are isolated, disconnected, living in despair.

They typically have housing, food, clothing. Yet they miss the large inter-connected families, the all-embracing social fabric of their previous homes.

They yearn for an extended family of friends and relatives—a living culture similar to the one in which they were raised. 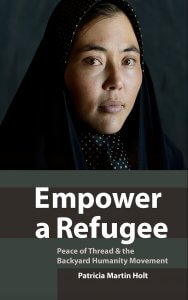 “Empower a Refugee: Peace of Thread & the Backyard Humanity Movement” tells the unknown story of ordinary Americans who saw a need, created an ingenious solution, worked hard, asked nothing in return—and found that their own lives were uplifted.

Author Patricia Martin Holt writes about “fabric” . . . the fabric of lives as well as the woven material that women can use to create garments and accessories.

In Amman, Jordan, in 1982, Holt visited Palestinian refugee camps and met women who created intricate textiles and restored themselves and their families in the process. Holt describes this experience in her first book, Committee of One.

Decades later in the Atlanta suburbs, Holt discovered Peace of Thread, an enterprise founded by a local resident—Denise Smith, who learned Arabic during six years of mission work in Lebanon. After returning to the Atlanta area, Smith made friends of refugee women who had resettled nearby. Holt found that, again, refugee women working with fabric and selling their creations overcame isolation, strengthened their families, made some money, and imbued their lives with purpose.

Holt recognized that we can work for world peace without grand gestures, photo ops, or foreign travel. All that is needed is to lend a hand to people in need—people who live in the same cities, counties, and communities where we live.

“The statistics and policy questions of a global refugee crisis are complex and overwhelming. What most of us can more readily understand—if we will take the time to listen—is a story.

Patricia Martin Holt is a gifted storyteller who has carefully conveyed the compelling stories of women­—those who have fled their countries as refugees and those in the US who have befriended them through the ministry of Peace of Thread.

Patricia Martin Holt raised three children, worked as a law firm administrator, and served in management positions for numerous professional and civic organizations before opening a management consulting business of her own. When her husband, a hydrologist, accepted a position in Amman, Jordan, she closed her business and joined him on a new adventure.

In exploring her new culture, Holt met Leila Wahbeh and saw the difference one purposeful woman made in the lives of thousands of refugees in camps in and around Amman. Her story became the subject of Holt’s first book, Committee of One, for which Holt was named a Georgia Author of the Year and awarded an Independent Publishers Association Bronze Medal. Back in the States, Holt’s sustained interest in refugee lives drew her to Clarkston, Georgia, a hub of refugee resettlement near her home.

In Clarkston, she met Denise Smith, a woman whose faith and personal experience of loss compelled her to find a way to help refugee women rebuild their lives. Smith founded Peace of Thread, a handbag company for which refugee women manufacture one-of-a-kind products. Empower a Refugee tells the story of this remarkable enterprise and of its founder, volunteers, and unique employees. When not writing, Holt is in her fine craft studio, working in clay.

Empower a Refugee: Peace of Thread & the Backyard Humanity Movement

Empower a Refugee is a moving book that can help us to recognize our own roles in the global refugee crisis.”

In a world and a national media environment where truth is a rare commodity, Americans like Patricia Martin Holt stand forth as truth tellers. If we are to heal our divisions, solve the most pressing problems with our economy, and recover our humanity . . . we would do well to read Empower a Refugee by Patricia Martin Holt and to study the Peace of Thread organization that it documents.

“Empower a Refugee is a beautifully told story about the challenges of refugee women and those who become their sisters, helping them stitch together unique handbags while stitching together new lives in a new country. This book weaves together the moving stories of refugee women who need help and the American women who help them through Peace of Thread. This is a story of faith, forged through friendship, that is a pattern for effective and humane refugee resettlement everywhere.”

Denise Smith had just returned from six years with her husband in Lebanon. Back in the US, she pondered the meaning her life might take when her church called and asked if she, as an Arabic speaker, would talk to a group of refugee women, most of whom only spoke Arabic.

She agreed and began to ponder and pray on what she could offer them. The plan revealed itself in her trusty old sewing machine. “I took it everywhere with me,” says Denise. “I am never without it.”

That first meeting began a journey that became the answer to many prayers. The prayers of women who have fled horrific conditions and only want one small opportunity to make a living, raise good children, and BE American, as well as the prayers of a woman who wanted to know what she should do with herself. Peace of Thread was born of these prayers.

The designer accessories company that emerged provides training, language lessons, fellowship, and jobs for women who have made their way from upheaval and threat to a place they can breathe and make a new life out of the patches of their former selves.

Holt captures the stories of refugees—as well as the volunteers who served them: people who became true heroes despite distressing circumstances in their lives. The stories are authentic and unfiltered, and tell of each person’s intimate life and struggles. I felt the pain in each story, and I was rewarded by the love, kindness, and hope that resurrected.

Peace of Thread weaves together the moving narratives of courageous women whose journeys brought them to Clarkston—a little town with a big heart. My eyes filled with tears of pride.

Holt shows how Denise Smith lives out her compassion for refugee women seeking support and for American women volunteers with the courage to move beyond their comfort zone. Her strength, drive, love, and grit have made Peace of Thread the success it is today.

Holt gives an inspiring account of how one person has transformed the lives of many refugee women. By Denise Smith’s example, we are challenged to personally reach out to the newcomers among us.

In a world full of heartache, we need more folks like those in Peace of Thread who truly care for and love the poor, the infirm, the dispossessed, while expecting nothing in return. This approach opens a door. It reaches those in need, helps to fulfill physical, emotional, and spiritual needs. To love our neighbors as ourselves. This is what is required for the long term change desperately needed around the globe.

The subject of displaced people is timely, and Holt’s insight into the journey of refugees from their famine stricken or war torn countries to resettlement in the USA is very important for our fellow citizens. We should read these stories. We should learn from these lives.

In a time when few seem to agree on what to do with our immigration crisis, Denise Smith has an answer. That answer is formed in the value and hope she sees in each person, whether a refugee or a volunteer who serves refugees, that her life has touched in the last eight years. That answer is pieced together with a mix of reclaimed materials and reclaimed lives. Peace of Thread does more than produce works of beauty, it produces dignity.