On Thursday, April 27, 2017, Palestinian artist and writer Kamal Boullata will receive a Special Recognition Award for his lifetime of work and dedication to bettering humanity through art at the Arab American Institute Foundation’s 19thannual Kahlil Gibran Spirit of Humanity Awards in Washington, DC.

Boullata, who began sketching as a child, has used his talent to make connections, explore Palestinian identity and examine the relationship between light and dark. As a young man, his promise was recognized with a scholarship that took him to Europe where he graduated from the Academia di Belle Arte in Rome.

Upon returning home he was at the forefront of a general art awakening in the area, however, the 1967 war forced Boullata to leave Jerusalem. Immigrating to the United States, Boullata continued his studies at the Corcoran Art Museum School while using this time to make significant contributions to the cause of Palestinian activism and the Arab American awakening that was occurring at the time.

A pioneer of contemporary Arabic art, Boullata began his career as a painter, mounting exhibitions and reading his translations of Palestinian poetry at universities across the United States. During this time, Boullata designed a wide range of posters highlighting the Palestinian struggle for justice and designed the logos of several Palestinian aid institutions.

Always expanding his reach and pushing his work to new horizons, Boullata pursued field research on Islamic art in Morocco and Spain and on post-Byzantine painting in Palestine. In 2012-13, Kamal Boullata was elected as a Fellow of the Wissenschaftskolleg zu Berlin, Institute for Advanced Study in Berlin. 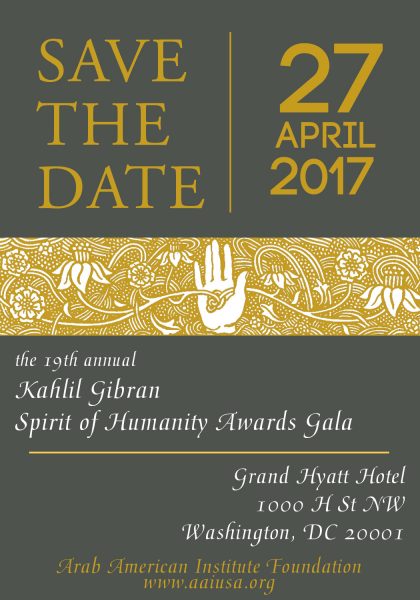 “As we approach the 50th anniversary of the occupation, it’s important to recognize that Palestinian culture continues to thrive under the most difficult of circumstances. For Palestinians, art is a source of optimism, courage and steadfastness. It’s a statement of determination, human endurance and celebration of the human spirit. Kamal Boullata is one of the great artists breathing life into this ideal. He has given so much, not only to Palestinians and Arab Americans but to humanity which is why we are honored to give him this special recognition,” said AAIF Director Maya Berry.

The Kahlil Gibran “Spirit of Humanity” Awards was launched in 1999 to recognize individuals, corporations, organizations and communities whose work, commitment and support make a difference in promoting coexistence and inclusion in all walks of life. The awards are named for the author of The Prophet, whose message of human endurance and triumph was so evident in his life and work. The awards further symbolize Gibran’s pride in his Arab heritage, respect for the freedom he found in the United States and his universal love of humanity.

RSVP Needed: jsalan@aaiusa.org
About AAIF: The Arab American Institute Foundation’s goal is to encourage, recognize, and celebrate Arab American participation in American civic life, and to cultivate and mobilize a strong, educated, empowered Arab American community that can play a meaningful role in developing and improving U.S. policies. A not-for-profit affiliate of the Arab American Institute (AAI), the Foundation supports programs that promote greater awareness of Arab Americans in the United States, demographic research and international outreach. The AAIF serves as the primary national resource on the Arab American experience for the media, academia, government agencies and the private sector. Through its numerous outreach programs, the AAIF builds leadership skills among students and young professionals and informs the American public, government agencies and organizations about the contributions and concerns of Americans of Arab descent.