The first Cubs curse was by an Arab, but it was for a good reason. It was issued by Abdullah al-Tidhatch in 1908 after the Cubs refused to reinstate the league’s first Arab player, Fareed Habibi, according to sources, myths and old wive’s tales

I worked at Chicago City Hall and I knew Mike Royko. I sat at Billy Goats many a time when he waxed poetic about the Cubs curse, and the truth.

The truth was the curse wasn’t put on the Chicago Cubs in 1945 by a Greek immigrant who owned a tavern and a goat, but by an Arab, the masters of the placing curses, with a goat and then several lambs.

This is a true story about the “Abdullah Goat” curse on the Cubs. Wallahi!

I learned about it through hints from Royko and other great journalists at City Hall, Bob Davis and Harry Golden, Jr., who, when learning I was Palestinian Arab, exclaimed, “Seriously, you’re not Puerto Rican?”

The curse was placed by an American Arab immigrant Abdullah al-Tidhatch in 1908 after trying three times beginning in 1906 to get the baseball team to rehire the league’s only Arab American player, Fareed Habibi. Abdullah was told he could not bring a goat into Wrigley Field to bring luck to the team,  even though he had season tickets that he got from his local alderman. The Cubs lost the 1906 World Series to the Chicago White Sox.

Abdullah returned in 1907 and 1908 to try again, when the Cubs again entered the World Series, and he tried a different, positive tactic. Abdullah brought lambs that he kept in a tent in the backyard of his home on north Clyborne Avenue to the games in 1907 and 1908. He sacrificed one each night, hoping to show the Cubs that they could win a World Series doing the right thing. The Cubs defeated the Detroit Tigers in 1907 and again in 1908. 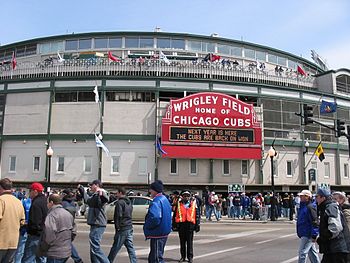 After winning the final series game and the World Series on Oct. 14, 1908, the Cubs still refused to rehire the Arab baseball player. Abdullah angrily denounced the Cubs owners and issued the now infamous curse that Mike Royko big-footed in order to give himself a favored seat at the Billy Goat Tavern.

In placing the curse, Abdullah teased that the Cubs would make it to the World Series only one more time after a long drought, but would lose. That was in 1945, of course when the Cubs lost to the Detroit Tigers, which is why Arabs began their great migration from the Middle East to Detroit to cheer against the Cubs at that World Series.

Why was Abdullah al-Tidhatch so determined to force the biased mainstream baseball association to draft Habibi, an American Arab? Because the Arabs invented baseball and they were never given credit for it. They were always cheated.

Click to listen to the audio podcast of this humor column, or use the widget below:

Levantine Baseball was recorded in the unpublished notes that accompanied the Rubaiyat of Omar Khayyam, which was lost during the sinking of the Titanic on April 15, 1912. The Rubaiyat included translations by British poet Edward FitzGerald of selected poems written by Omar Khayyam. Rubaiyat, two line stanzas in two parts, is a derivative of the Arabic word for Arba’a, or the number 4, meaning “quatrains.” Omar Khayyam was a Palestinian who lost his passport while traveling through Assyria and ended up in prison in Persia where he eventually was given Persian (Iranian) citizenship after promising to convert from his Sunni religion to Shia religion.

Till this day, the battle over Omar Khayyam’s heritage is waged between Sunnis and Shi’ites, as seen in the decade long war between Iraq and Iran, and later the divide between the Gulf Arab nations and Iran.

Abdullah was born in Bethlehem, just outside of the Holy City of Jerusalem in 1878. He hoped to be a poet, which angered his parents who wanted him to either be a doctor or a grocery store owner, respectable professions in Arab culture.

As a young child, Abdullah went to the Church of the Nativity, where he played in the Arab League, first as a first baseman and later as a pitcher.

In 1906, American baseball only had one player who was believed to be Arab. His name was believed to be Fareed Habibi, though he went by the Americanized version, Fred Beebe. It was very common for Arabs who lived in America to Americanize their names. Mohammed was Mike. Fareed was Fred. Assad was Ass.

He was a great pitcher first for the Chicago Cubs and later for the Cardinals, the Reds, the Phillies and the Indians.

There was a big debate in Palestine about how the British had promised the World Series to the Cubs in 1906, if they would support the impending war against the Ottoman Empire.

In the reporting in the daily Palestinian newspaper al-Quds, published by one of my ancestors, Jiries Hanania, Habibi’s drafting by the Cubs was the front page headline, in Arabic, of course. Fareed Habibi was described as “the Palestinian who will martyr himself for the cause of restoring the Seventh Inning Stretch because it was in the Seventh Inning that Allah had created Man.”

Abdullah al-Tidhatch hoped the Cubs would see the power of the sacrifice as he stood outside of Wrigley Field creating the first “tailgate” barbecue from the trunk of his car in the parking lot, as the Cubs won both the 1907 and 1908 World Series games.

Many Arabs, though, believed the fix was in from the beginning. Many things in history reinforced this view of conspiracies. James Cameron’s hit movie Titanic featured an Irish celebration among the Third Class passengers. In reality, the real party on the Titanic was actually a Lebanese engagement party. More than 150 Arabs were aboard the Titanic, but were never acknowledged until many years later.

On a positive note, had they been acknowledged sooner as being on the Titanic, they would have been blamed for sinking it, rather than blaming the sinking on the anonymous “Iceberg” — many Arabs came to the defense of Jewish Americans saying it was unfair to stereotype based on religion.

The al-Tidhatchs were a funny people. It was Abdullah’s dream to revive baseball in Palestine launching a team called the Habibis, named in honor of Fareed Habibi.

But, every time they would throw a ball, the British soldiers arrest them under the Mandatory Laws. The landscape was torn up by conflict and by the 1930s, Arabs and Jews were fighting over who invented Taboulie, Hummus, stuffed wrapped grape leaves, and baseball got lost in the mix.

Baseballs were banned in 1936, which many regretted because they were quickly replaced with stones.

Years later, Abdullah tried to enlist in the U.S Army after the Japanese surprise attack on Pearl Harbor, but he was rejected as being too old. He was 63 and he insisted that if he could have a 20 year old wife in America, he could also fight for his country, too. At the time, despite President Franklin D. Roosevelt’s assertions in his powerful “infamy” speech, most Americans believed Arabs were behind the Pearl Harbor attack. For months through the beginning of 1942, many Arabs were assaulted and discriminated against in America.

Fortunately, the Arabs were quietly exonerated by the FBI and FBI Director J. Edgar Hoover, who kept pictures of Abdullah because he thought Abdullah “was still very handsome at 63,” according to much redacted FBI files released in the 1960s to prove Arabs were not responsible for the assassination of John F. Kennedy.

Anti-Arab racism continued throughout World War II, even though many American Arabs enlisted and served in the U.S. Military to fight both the Axis powers, Germany, Japan and Italy.

Till his dying day, Abdullah argued that baseball without an Arab was anti-Arab, explaining, “To sacrifice for a fly is an insult.”

Arabs, Muslims and Christians believe strongly in the Jinn, or the evil spirit. A passage in the Quran, the Surat al-Fatiha, is often recited to ward off evil spirits. Many Arab Christians wear blue stones blessed in the Church of the Holy Sepulchre along with their gold St. Christopher Medals, named in honor of the patron saint of travel and baseball. As Christian legend has it, St. Christopher carried a young boy across a violent river, saving his life.

But while this was interpreted as saving another traveler, the boy saved was actually one of the early pioneers of baseball in the Holy Land, where baseball was originally invented before being stolen by the West.

In Arabic tradition, the numbers 108 and 71 hold special significance in curses, spells and the Jinn.

And that explains Abdullah al-Tidhatch’s curse. The year 2016 is both the 108th year since the last time the Chicago Cubs won a World Series, and 71 years since they won a pennant.

The curse was lifted only because it had come to its end, although it could have ended years earlier.

When the Cubs appeared headed to breaking the curse in facing the San Francisco Giants, also called the “Goliaths” in Arabic, Abdullah al-Tidhatch reached out to the Cubs and told a reporter that he would lift the curse only if the Cubs would draft Sam Khalifa, the only American Arab to ever play professional Baseball, back from Minor League baseball to the Major Leagues.

Khalifa was an infielder who played for the Pittsburgh Pirates from 1985 until 1987 but was sent to the minor leagues where he played until 1990. Khalifa retired from baseball when his father, Rashad, was murdered by religious extremists.

The Cubs refused. Abdullah al-Tidhatch died on October 9, 1989 before Game 5, which the Cubs lost later that day to the Goliaths (Giants), 3 to 2, at Candlestick Park in San Francisco.

His dying words were recorded as, “The Cubs will be behind the Goliaths, but will rally in the 9th inning, Inshallah. If they hire Khalifa, they will hit three home runs and win. If not, the rally will only make their loss even worse. Yah Rubbee!”

It certainly did. LOL

(Ray Hanania is an award winning former Chicago City Hall reporter and columnist. He can be reached at rghanania@gmail.com.)