The Intercept is a platform for documents released by Edward Snowden on a mission to “produce aggressive, adversarial journalism across a wide range of issues” 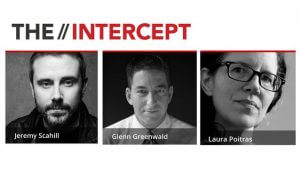 On the Welcome page of The Intercept the founders wrote:

Our central mission is to hold the most powerful governmental and corporate factions accountable, and to do so, we will report on a wide and varied range of issues…

Our longer-term mission is to provide aggressive and independent adversarial journalism across a wide range of issues, from secrecy, criminal and civil justice abuses and civil liberties violations to media conduct, societal inequality and all forms of financial and political corruption.

The editorial independence of our journalists will be guaranteed, and they will be encouraged to pursue their journalistic passion, areas of interest, and unique voices…[and] encouraged, to pursue stories without regard to whom they might alienate.

A search of The Intercept for “Israel’s nuclear weapons” leads to a total of six articles.

A search at The Intercept for Israel’s nuclear whistle-blower “Mordechai Vanunu” leads to an empty page headlined:

Couldn’t find any results for:

I received a total of one auto-reply from the Submissions Editor at The Intercept stating:

Thank you for contacting The Intercept and for your proposal. If we are interested in pursuing the story, an editor will follow up.

Unless otherwise stated EXCLUSIVE submissions expire in three days and as no follow-up from The Intercept came, I publish my offering to The Intercept following this excerpt from the Amazon Customer Discussion “FUN FORUM: Notable Traitors” which stated:

Name the first TRAITOR that comes to mind.

The first TRAITOR that comes to mind is President Lyndon Baines Johnson and every President and Congress since because all have colluded in the now 50 yr. cover-up of Israel’s 8 June 1967 attack on the USS LIBERTY. LBJ instigated the COVER-UP and obstruction of justice case against the USS LIBERTY crew and YOU can READ all about it at KINDLE:

Rameht Tinma Haas noted his top traitor as Mordechai Vanunu and most everyone agreed.

Many consider Mordechai Vanunu a traitor, some a hero but for this American writer who met Vanunu in east Jerusalem in 2005 during my first of 8 investigative journeys to both sides of Israel’s Wall in Palestine Vanunu became the catalyst for me to realize my childhood dream [at 50!] of being a reporter/author.

Vanunu and I began a series of interviews beginning with his childhood and through his under-reported freedom of speech trial, which began in 2006 and concluded in 2010 with 78 days back in solitary confinement.

Read ALL about it at KINDLE: “BEYOND NUCLEAR: Mordechai Vanunu’s Freedom of Speech trial and My Life as a Muckraker 2005-2010”

To this day Vanunu remains waiting for his right to leave Israel and join his wife in Norway- that story and more also at KINDLE: “Heroes, Muses and the Saga of Mordechai Vanunu (My Life as a Muckraker Book 2)

My June 16, Exclusive Submission to three desks at The Intercept:

In 2005 I was an American in east Jerusalem writing my first historical fiction when a ‘chance encounter’ with Mordechai Vanunu [who was released from 18 yrs. behind bars in 2004, under draconian restrictions and 24/7 surveillance] became the catalyst for my becoming Senior NON-Arab correspondent for USA’sTheArabDailyNews and Author of nine books. Thank you for consideration of:

Israel’s State Torture of its Nuclear Whistle Blower, Mordechai Vanunu began in 1986 with a Mossad kidnapping from Rome, a closed-door trial, 11 ½ years in solitary confinement with a total of 18 years behind bars until 2010; when Vanunu spent 78 days back in solitary because he spoke to foreign media [such as Amy Goodman] after being ‘freed’ from behind bars on 21 April 2004 under 24/7 surveillance and draconian restrictions including he NOT speak to foreigners.

In June 2005, this American was in east Jerusalem in the midst of writing my first historical fiction when I met Vanunu by ‘chance’ and we began a series of interviews that did NOT undergo Israeli Military Censors as is required of all media who want to retain their Israeli press credentials.

I do not hold Press Credentials, but I became a reporter simply because Mordechai  Vanunu told me:

In May 2015, the 60 yr. old Vanunu wed for the first time to Kristin Joachimsen, a Professor of ancient Hebrew Scriptures who immediately filed the paperwork for Vanunu’s asylum.

However, to this day, Vanunu and his wife remain “waiting” for Israel to end the restrictions and allow Vanunu to move to Norway.

In September 2015, Vanunu granted his first and still only Hebrew speaking interview to Israeli media in an appeal to the Israeli public who consider him a traitor:

Despite the fact that Israel’s military censor had cleared the interview for broadcast, Vanunu was put under house arrest following that TV interview according to Israeli police “in defiance of the terms under which he was released in 2004.”

A few of my Mordechai Vanunu interviews that did NOT undergo Israeli Military Censors:

Vanunu talks about the “The real Wailing Wall; the Apartheid Wall”

In April 2015, Mordechai Vanunu “fired” me as a supporter and dismissed me as a reporter, but due to recently declassified documents dating back to the Eisenhower Administration regarding Israel’s nuclear deceptions ALL those facts have been enshrined HERE

On 10 March 2017, Mordechai Vanunu TWEETED: They decided to continue with the restriction not to allow me to leave this Jewish state since 1986…

Vanunu’s long strange wait for his right to leave Israel continues: but everything of importance regarding Vanunu is already on the World Wide Web.

In 1986, London’s Sunday Times hired Nuclear Physicist Frank Barnaby to vet Vanunu’s story [just before he was lured from London to Rome and kidnapped by Mossad]

My article “Mordechai Vanunu, the Snowden of Israel” begins with this quote from Vanunu: “Snowden is the best example of what I did 27 years ago – when the government breaks the law and tramples on human rights, people talk. That’s what he did, he speaks for everyone, and that’s what I did – I spoke for everyone.”

The article concludes noting the last time I visited with Vanunu in east Jerusalem, November 2013.

Vanunu told me a reporter from CNN had recently asked him for an interview but Vanunu told him:

“No, everything is already on the Internet.”

Just not at The Intercept!