Through resolution 67/56 the UN General Assembly decided in December 2012, to convene an OEWG to develop proposals for multilateral nuclear disarmament negotiations and the achievement and maintenance of a world without nuclear weapons.

On 9 December 2014, at the conclusion of the Vienna Conference on the Humanitarian Impact of Nuclear Weapons, [attended by 158 nations] The Humanitarian Pledge sealed a commitment to launch negotiations on a treaty banning nuclear weapons.

This document provides governments with the opportunity to move beyond fact-based discussions on the effects of nuclear weapons to the start of treaty negotiations.

Outlawing nuclear weapons is not a radical proposition: it enjoys widespread support among nations, and is the logical and necessary course of action in light of the indiscriminate and catastrophic effects of any use of these weapons.

On 7 December 2015, the United Nations General Assembly adopted the Humanitarian Pledge in the form of Resolution 70/48.

America, Israel, Germany, France and the UK are among the 17% of world nations NOT in favor. 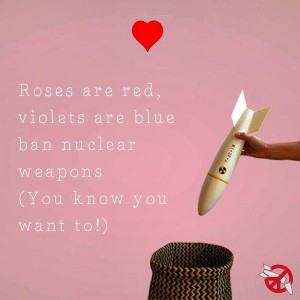 I had a court hearing on [October 26, 2015]. We appealed all the restrictions. I even spoke to the Judges. They gave to the police 90 days to end their investigation for last arrest, after that they will decide.

In September 2015, Vanunu granted his first interview to Israeli media speaking only in Hebrew in an appeal to the Israeli public who consider him a traitor stating:

I got married three months ago. I can’t get a job here, so she is the breadwinner. I want to live my life, start my life anew. I’m finished with this entire [nuclear] story, and I’ve said this hundreds of times. I have no more secrets to tell, and I want them to let me leave and go live abroad with my wife, and that’s the end of the story.

When I last saw Vanunu in November 2013, he told me he had recently declined a CNN reporter’s request for an interview because: “Everything is already on the Internet”

Send your UN Ambassador this message:

I write to you because I am deeply concerned about the catastrophic humanitarian consequences that nuclear weapons pose.

Nuclear weapons are indiscriminate, inhumane and unacceptable weapons. They need to be prohibited by an international treaty.

On Monday 22 February, all governments have the possibility to participate in the Open-Ended Working Group on “taking forward multilateral nuclear disarmament negotiations” in Geneva, Switzerland.

This working group is an excellent place for all governments to start discussing the legal measures needed to fill the legal gap for the prohibition and elimination of nuclear weapons.

I urge you to participate fully in the working group and engage in discussions to negotiate a new treaty prohibiting nuclear weapons. 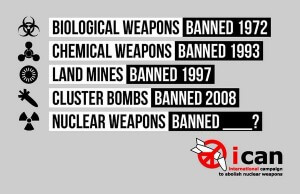