ADC hopes that you have been enjoying the webinars in our September 11th 20th Anniversary Symposium and invites you to our third panel this coming Monday, August 16th at 4 PM EST ( or 1 PM PST, 11 PM Riyadh, Midnight Dubai).

This week’s conversation will be moderated by veteran journalist Ali Younes, who will be joined by Program Director at Rethink Media Adrienne Mahsa Varkiani; columnist and author Ray Hanania; and investigative reporter for the Los Angeles Times, Adam Elmahrek.

Speakers will discuss the media’s portrayal of Arabs and Muslims after the September 11th attacks and the lasting effects of those media portrayals our Arab American communities. Make sure to register, leave questions for the speakers, and share this with anyone who might be interested!

This webinar will be held via Zoom. Registration for the webinar is required and can be completed by clicking this link here. 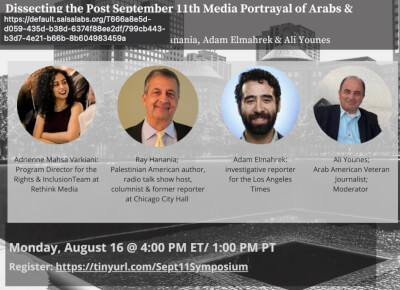 Adrienne Mahsa Varkiani is the Program Director for the Rights and Inclusion team at Rethink Media. Prior to that, she was a senior editor at ThinkProgress, where she worked with the newsroom’s policy reporters. She has also served as an editor at Muftah Magazine. Varkiani received her master of science in international relations from the London School of Economics and Political Science and her bachelor’s degree in international studies from American University in Washington, D.C. Her work has appeared in Slate, Teen Vogue, The Counter, and others.

Ray Hanania is an award winning Palestinian American author, radio talk show host, syndicated columnist and former Chicago City Hall reporter (1976 -92) who writes on mainstream U.S. politics for the Southwest News Newspaper group, and Middle East issues for the Arab News Newspaper as U.S. Special Correspondent and columnist. A former WLS AM Radio talk show host, Hanania hosts a live radio talk show sponsored by the Arab News on the US Arab Radio Network every Wednesday morning on WNZK AM 690 in Detroit and WDMV AM 700 in Washington D.C.

Hanania was an early organizer for ADC in 1980, serving on the Chicago board and later National board. He is the recipient of the 2010 Society of Professional Journalists Sigma Delta Chi award for column writing, was named Best Ethnic Columnist in America in November 2006 by the New America media, and is the recipient of four Lisagor Awards from the Chicago Headline Club. He is the author of several books,“I’m Glad I Look Like a Terrorist: Growing Up Arab In America” (1996), “Arabs of Chicagoland” (2005), and “Power PR: Ethnic Activists Guide to Strategic Communications”.

Adam Elmahrek is an award-winning investigative reporter for the Los Angeles Times who specializes in corruption. He started his journalism career in 2010 at the nonprofit news website Voice of OC, where he broke stories exposing misconduct in local government. In 2013, he uncovered a land swap between a powerful local politician and a government contractor that led to federal and local criminal investigations.

Ali Younes is a veteran Arab American journalist covering US national security and Middle Eastern affairs. He is member of the Washington Association of Arab Journalists and listed as one of the US State Department’s Middle East analysts and experts. He is also a contributing analyst for several Arab, American and International news channels such as Al Jazeera, Fox News, CNN, BBC and others. His columns appeared in major US and international publications such as the Chicago Sun Times, Chicago Tribune, and USA Today, the Intercept and the New York Times.

Stay in the loop and follow up on updates for the September 11th 20th Anniversary Virtual Symposium! We hope that you can join us.