On March 23, 2022, the American Human Rights Council (AHRC-USA) hosted a private “Meet & Greet & Open Conversation,” event regarding the common and ongoing challenge of opioids addiction and other substance abuse.

The event was held at the conference room of the Islamic Center of Detroit (ICD). ICD graciously provided the facility and other accommodations that contributed to the success of the event.

The topic of discussion was the challenge of opioids facing all locally and nationally. Ms. Ison presented a comprehensive overview and statistics related to this challenge.

US Attorney Ison stressed that only through collaborative efforts between government and the community this challenge can succeed in saving lives. Substance abusers are targeted by the greedy who help create and profit from the addiction.

Both the FBI and the HIS echoed this sentiment and vowed to continue pursuing swift action against those who contributes to the opioids and substance abuse. The US Attorney and both agencies affirmed that they will not spare any effort to prosecute aggressively all of those who are part of the problem including pharmacists, social workers, physicians, drug companies’ representatives, and dealers that provide the drugs.

Community leaders commended the law-enforcement at all levels for their action to hold dealers accountable. All guests agreed that this challenge requires a solid collaborative effort of government, community, and health care providers to effectively combat it. The participants stressed that pro-active efforts and action are key to preventing the increase of opioids and overdose deaths. Prevention is what is required, and such prevention program should be available and should be well supported.

Community leaders called upon the government at the state and national level to pay more attention to the importance of the preventive approach. They called for funds so all community organizations involved in fighting this ongoing challenge be better equipped to provide much-needed intervention through education and awareness campaigns targeting the youth in the Arab and Muslim American community in Dearborn where opioid addiction is a real problem.

Participants acknowledged that no magic solution is available to put an imminent end to opioid addiction. This is a prime challenge facing our cities, states, and the nation. It’s also a global challenge. Only though collaboration and active engagement among all stakeholders this problem can be effectively tackled. 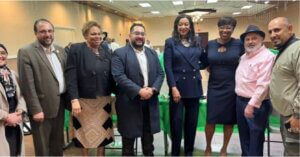 “Opioids are ravaging communities across America with nearly 70,000 deaths in 2021 alone from synthetic opioids like fentanyl. Our office stands ready to prosecute those who put lives at risk peddling opioids to the community whether they be drug dealers on the street or physicians and pharmacists who act as drug dealers wearing white coats who illegally prescribe and distribute opioids to the community,” said Dawn Ison, US Attorney of the Eastern District of Michigan.

“Still, law enforcement cannot be the only solution to address this crisis.  I applaud community members who organize events like today’s event that publicize this issue and can hopefully prevent opioid abuse before it starts and bring this issue out of the shadows,” concluded Ison.

“It was indeed an honor to meet with US Attorney Dawn Ison and her team yesterday at the IDC as a guest of the AHRC. US Attorney Dawn Ison was brilliant and commanding as she shared her vision for eliminating the Opioid Crisis in this region. Her passion for the law coupled with her vision and desire to ‘rebuild, reinvigorate and restructure’ will truly stimulate and cement stronger bonds in our community for the good of all,” said Judge Denise Langford Morris, Chief Judge Pro Tem, Oakland County Circuit Court and AHRC Advisory Board Member. “I believe that her broad focus on punishment and prevention regarding opioids constitutes the necessary balance during tough times like these,” added Morris. “Thank you AHRC for allowing our community leaders to speak truth to power in a comfortable setting while exchanging ideas from those on the front lines including families, education leaders, doctors, therapists, and all levels of law enforcement,” concluded Judge Morris. 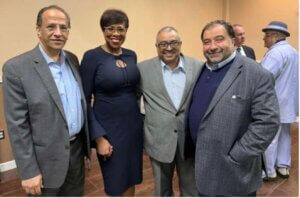 “The opioid epidemic is a health crisis affecting every member of our communities. Collaboration with stakeholders including law enforcement, health providers, education system, judicial system, and community at large is the only way to combat current opioid crisis successfully,” said Mr. Sebi Fishta, Ph.D. Psychology and Counseling Depts., Oakland University

“Anytime we can gather to help individuals and families struggling with substance abuse disorder we are truly helping all communities in need. It will take a combined effort to overcome this,” said Lieutenant Joseph Bialy Canton Police Department. “The police need the community, and the community needs the police, together we can make a difference,” added Bialy.

AHRC will work with all community partners to advance efforts to fight and combat the opioids pandemic and help break the cultural barriers that have been a major obstacle and reason for many families and parents not to seek the professional help they need to help save the lives of their loved ones.

“AHRC extends its appreciation to the guests and the government agencies who joined us in this important conversation that should continue,” said Imad Hamad, AHRC Executive director. “The issue of opioid addiction is one of the key issues AHRC focuses in advancing its mission,” added Hamad.  “The right to a healthy life, life with health and dignity, is at the core of human rights,” concluded Hamad.

The American Human Rights Council (AHRC) is dedicated to defending and protecting human rights as outlined in the U.S. Constitution and the United Nations 1948 Universal Declaration of Human Rights (UDHR). The AHRC was formed to protect these rights and advocate for anyone whose rights are being violated or denied. To that end, the AHRC will build a tenacious, objective, and carefully guided advocacy program that will serve to defend individual human rights, whenever and wherever they are being infringed upon