Arab business owners protest the closure of their stores by Chicago Mayor Lori Lightfoot asserting it is driven by racism and misguided effort to respond to rising street gang violence in the city. The mayor believes that gas stations and grocery stores that are open 24 hours a day are magnets for gangbangers. Chicago’s murder rate is one of the highest in decades and around the country. Video below of press conference

Listen to Ray Hanania talk about the story on WVON 1690 Radio with Host Perri Small using this embed link:

Alderman Raymond Lopez said on Monday that city council members are reviewing allegations made by more than 50 Arab American and Muslim small-business owners against Mayor Lori Lightfoot and the city’s business inspection department.

At a press conference held at an Arab-owned business closed by the city for more than 52 days at 79th and Western on Chicago’s Southwest Side, Arab and Muslim business operators claimed that the city was intentionally seeking to shut down their businesses.

Arab store owners said that they believe Lightfoot is motivated in part by racism against Arabs and Muslims, but is also closing the stores in the mistaken belief that it might reduce the city’s skyrocketing street gang murder rate.

“Today I joined nearly two dozen business owners who feel they have been unfairly targeted by racist tactics supposedly focused on reducing gang violence in Chicago,” Lopez, the alderman of the 15th ward, told the gathering of 25 Arab and Muslim store owners.

“Sadly, two days after mayor Lightfoot declared that 9/11 gave rise to much anti-Arab hatred in America, she herself, in declaring war on gang terrorists, is also targeting Arab business owners in mostly African-American communities.”

He added: “Lightfoot is once again showing she does not understand how to address violence in a nuanced manner, instead choosing blanket policies that target entire demographics and play on local stereotypes.”

Three Arab businessmen share their stories about being harassed by Mayor Lori Lightfoot’s Special task Force that is targeting Arab Owned stores for closure int he city
Click here to read the full news story from Ray Hanania at ArabNews.com. 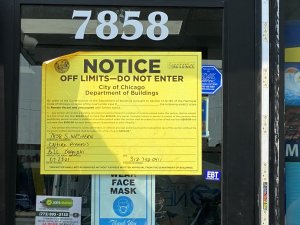