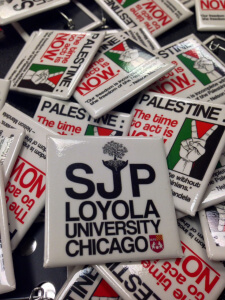 In the face of growing legislation that would punish any company, school or organization that “boycotts” Israel, Loyola University became the first Jesuit University to approve a resolution to divest from any business that profits from the illegal and oppressive occupation of Palestine.

The vote came Tuesday, March 18, as the Unified Student Government Association (USGA) at Loyola University Chicago passed the divestment resolution, following a campaign led by Students for Justice in Palestine (SJP) which collected more than 800 signatures from students on campus urging the adoption of the new policy

Supporters called this a victory marking the first Jesuit University to adopt a divestment resolution. It comes after two years of campaigning by the Students for Justice in Palestine (SJP) on the campus and on campuses around the country.

“Since the vote, representatives of the student government have been receiving hateful emails from opposition groups demanding they rescind the vote,” a statement from supporters explained.

Those who support justice and fairness are being urged to “Please take a few minutes to send a thank you note to the student representatives for standing up for justice and to encourage them to remain steadfast in their decision. You can find recommended talking points and take action here.”

You can go online by clicking here to show your support to counter the hate campaign being waged by extremist groups supporting a foreign country. SJP has cited three important points to reflect why the adoption of the Loyola Divestment Resolution is important and necessary:

As the National SJP wrote in its statement of thanks: “This week, Loyola’s USGA has done something incredible. You have created a platform for discussing important issues directly related to students–where our money goes. If students won’t take a stand on who our universities invest our tuition money with, then who will? This divestment resolution is taking an immense and beautiful step towards positive social change.”

The US Campaign to End the Israeli Occupation is the largest and most diverse coalition working to change U.S. policy toward Palestine/Israel to support human rights, international law, and equality.

More than 400 groups and organizations – local, state, regional, and national – have signed on to the Campaign Call to Action, thereby committing to work for its principles and purpose collaboratively and in good faith with other Campaign groups. Click here to get more information.

(Ray Hanania is a former Chicago City Hall reporter and columnist. He is the managing editor of the Arab Daily News online at www.TheArabDailyNews.com.)