A US election special: meet the Americans of Middle Eastern descent supporting Trump

Author’s note: The views expressed herein do not reflect Kerning Cultures’ and company’s personal views. As always, we remain agnostic. And, the above episode is different from the article below.

“Donald J Trump is calling for a total and complete shutdown of Muslims entering the United States until our country’s representatives can figure out what the hell is going on,” reads Donald Trump, the 2016 Republican Nominee for president at a rally in December 2015, following the San Bernadino shooting in the United States.

You can imagine our intrigue when we learned that there is a growing movement among Americans of Middle Eastern descent, Muslims and non-Muslims alike, who are supporting Trump.

We spoke with Hossein Khorram, an Iranian Muslim American living in Seattle, who is a fundraiser for Trump Victory Inc. So far, he has raised $140,000 for the Trump campaign. Hossein was born in Northern Tehran, went to public schools, and in the 1970s he remembers “when everything went south.”

“I clearly recall the inception of the revolution in Iran,” remembers Hossein. “They were a small group of people, not popular. In my high school maybe 5% were the Islamists? 95% were people like me who respect the religion and God, and Prophet Mohammed, but felt that was not a license to override other people with.”

As the Islamic revolution picks up momentum in Iran, Hossein’s parents encourage their two sons to go abroad for their schooling. So Hossein gets a visa and goes to the States. His family follows him a few months later, but his father, Farhad Khorram, continued going back and forth to check on the family business. Farhad and his brother owned a large manufacturing company with a couple hundred employees selling fireproof safes and metal cabinetry in Tehran.

On one trip back to Tehran, Farhad was planning a hunting trip with his brother and four friends, about 3,400 miles away from the capital. As he spoke freely about the trip in his office, one man from the Foundation of the Weak, “Bonyad Mostazafan” was stationed at the office as a guard, and overheard his plans. These foundations were notorious during the time of the revolution for doing political work under the guise of charitable foundations, including seizing private assets.

“And when [my father] went hunting, the revolutionary guards were waiting for them.” The guards claimed his father and friends were conspiring a coup against the regime as enemies of God, and they pointed to the weapons Farhad and friends were carrying as proof of their ill intent. The guards blindfold Farhad and party, put them in a mini bus, and drove them to the Evin Prison, a prison notorious for its executions and political prisoners.

At the prison, the guards brought pieces of paper, handed them to Farhad and party, and instructed the group to write their wills, because they were going to be executed.

The guards blindfolded them, lined them up, but instead of shooting at them, shot into the air. “It took them a few minutes to kind of touch and figure out which world they were in, is it this world or the next? And after a minute or so, no they’re not dead yet, they’re still here.” The guards said, they changed their minds and would execute the group in the morning.

The following morning, the guards line the group up and – shots in the air. This goes on for four or five days; each day Hossein’s father is told he will be executed, and by the next morning the guards change their minds. Eventually his father is transferred to a different prison where he is held for another 8 months, and then one day the clergy walks up to Farhad and offers him a deal: pay $80,000 as compensation for our hospitality, and we’ll let you out for a vacation for one day.

“My aunt came up with the money, and they had him leave for one day, but the understanding was he would never come back.”

By this time, the regime had seized all the Khorram family’s assets, and Hossein’s father had nothing – they lost possession of their houses, bank accounts, everything. The family borrows money from friends, and Farhad is driven to the border and escapes into Pakistan, and at the kindness of strangers finds his way to the US to reunite with his family, and the family begins rebuilding their lives.

Fast forward to the present day: Hossein lives in Seattle in the States and is a real estate developer. I met him in one of his buildings, an apartment complex that has Trump / Pence signs hanging off the balconies. Most of the tenants are Iranians, older men and women who sit in the common room and play board games, chatting in Farsi. And most are voting for Trump for the same reasons as Hossein.

“Politics tore our life apart,” says Hossein. “Before this revolution we were just ordinary people who didn’t really care for politics, but we paid a very dear price. Our life became political. I became active in the Iranian resistance to the regime. And one thing that compels me to the Trump campaign is the way appeasement policies have not paid off. Since President Obama signed the nuclear agreement with Iran… we have to let go of appeasement, and the time is now.”

Among Christian Arabs or ethnominorities such as Yazidis, Assyrians, and Chaldeans, supporters of Trump feel that the US has not been tough enough on rising Islamic extremism that threatens their home country communities. “We don’t think that a third Obama term is going to be good for the Middle East,” says David William Lazar, one of the members of the American Mid East Coalition for Trump. “And by third Obama term I mean Hillary Clinton. So we looked at what Mr Trump was saying about his Middle East policies, and that’s why we’re working to get him elected.”

(Verbatim from the AMC Trump website)
(1) His opposition to the destructive Iran Deal signed by the Obama administration with the Ayatollah regime in Tehran; (2) His firm opposition to the Muslim Brotherhood and other Islamist influence in the United States; (3) His determination to destroy ISIS and push back against all terror groups such as Hamas, Hezbollah and all other Jihadi terror groups; (4) His willingness to take action in defense of the persecuted Christians and Yazidis in the Middle East; (5) His determination to help in the creation of free zones inside Syria and Iraq to resettle the refugees; (6) His support for the formation of an Arab coalition against terrorists; (7) His vision to help the Middle East become stable and prosper. 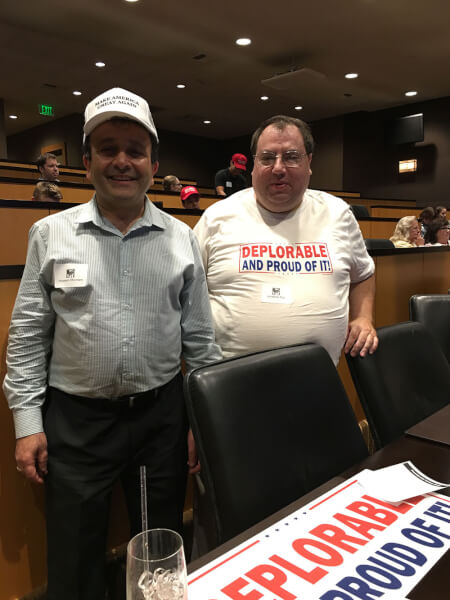 Hosssein Khorram, a fundraiser for Trump Victory Inc., at the Seattle Republican viewing party for the first presidential debate. The man next to him is wearing a shirt that references a Hillary Clinton comment in September, “you can put half of Trump supporters in what I call the basket of deplorables. The racists, sexists, homophobic, Islamaphobic.”

One rising sentiment seems to be that while Hillary Clinton is politically correct, her policies voting twice for the Patriot Act and voting for the Iraq War have adversely impacted the Middle East as a region and its diaspora population in the United States. We heard a lot of, “I’d rather have someone slap me in the face than stab me in the back. At least I know what I’m dealing with.”

Or, we heard that Trump’s volatility and unfamiliarity with politics are perceived as his strengths: “I’m going to vote for Trump,” says Ray Hanania, a Palestinian American journalist living in Chicago. “Even though it’s a 50/50 risk he may be just as bad as Hillary… or! Maybe, there’s a chance, because he’s so uncontrollable, that he could turn out to be the catalyst that changes the dynamics of how this country deals with the Middle East. Now, people say, oh that’s a big if! But I say, okay, it’s a chance. But you know, when you gamble, you’re taking a chance, and I’m willing to risk it with him rather than risk with somebody I know is going to take me down a road I don’t want to go down.”

While statistics are difficult to gather with any certainty on the Middle Eastern American population in the United States, one survey by the Council on American-Islamic Relations in March 2016 found that 11% of their surveyed 1,850 registered Muslim voters across six states support Trump. From our on-the-ground conversations with Middle Eastern Americans in Maryland, Washington DC, Chicago, LA, and Seattle, we found quite a few who plan to vote for Trump — some are silent in their support, some are vocal.

This feature was originally published on Kerning Cultures.

No Arab-Israeli battle at this year’s Oscars American Arabs