Americans for Justice in Palestine Action calls for Day of Action Thursday Oct. 28

Join us today as we #StandWithThe6

Last week, six leading Palestinian human rights organizations, whose missions are to protect and uphold human rights and provide essential services to Palestinian communities, were designated as terrorist organizations by Israel in an attempt to deter them from documenting the Israeli government’s violent and oppressive regime against Palestinians.

This attack is a continuation of the sustained Israeli assault on Palestinian rights. Shutting down, suppressing, and censoring human rights organizations illustrates Israel’s separate and unequal apartheid rule over Palestinians. Israel strives to evade accountability for its atrocities by attacking Palestinian organizations advocating for human rights.

TODAY, Thursday, October 28th, is a global day of action for the protection of Palestinian civil society. 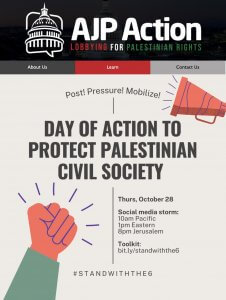 Here’s what YOU can do to help:

Israel is attacking the messenger because it cannot effectively respond to their message. Silencing the six organizations will put millions of Palestinians in danger and we will not allow Israel to silence them or the Palestinian movement overall.

At any moment, Israel can arrest these organizations (Defense for Children International- Palestine, Al Haq, Addameer: Prisoner Support and Human Rights Association, Union of Agricultural Work Committees, Bisan Center for Research and Development, Union of Palestinian Women’s Committees) staff, raid their offices, and deny them essential funding amongst many other things.

It’s critical that we speak out against these unjust attacks, remain consistent in our work against the Israeli government’s oppressive regime, and stand firm until they are held accountable.

Thank you for rising up and taking action for Palestine. We can’t stop until it is free.