American Arabs have been urging the U.S. Census for years to include a category that will help empower America’s growing Arab community. But racism among public officials has stood in the way. But Census officials said this week that they will “test” using a new category to include American Arabs “Middle East and North Africa” this Fall

Almost 40 years ago when I first got involved in American Arab activism and civil rights, I and other American Arabs worked closely with the U.S. Census believing that one day they would treat “Arabs” they way they treat everyone else in collecting data on Americans.

Being counted in the U.S. Census is important in a lot of ways. For the far right fanatics who hate Arabs and Muslims and can’t tell the difference between them, it’s important because it helps identity who they are and where they live. Isn’t that what profiling is supposed to do?

According to published reports, two members of Congress from Michigan, which has the largest population of American Arabs, Senator Debbie Stabenow and Congresswoman Debbie Dingell, have argued that American Arabs are ineligible for Voting Rights Act protections. Those protections include guaranteeing that American Arab voters receive ballots during elections that are in Arabic, as they are now provided for other ethnic and national groups in this country.

In many states, like Illinois, the identification of ethnic and national groups plays a significant role in how districts are drawn to allow those ethnic groups to be concentrated in the same district, giving them voter strength.

In other words, if the officials in Illinois, for example, do not know where American Arabs actually live or how many American Arabs live in the state, they can ignore American Arabs when defining a district. Illinois has created many political voting boundaries to strengthen the vote of African Americans and Hispanics by grouping them together in the same district magnifying the power of their community vote.

But that can only be done if the data is available to show where those minority groups actually live and how many of them there are and where they are concentrated.

Many elected officials today can ignore the needs of American Arabs, especially in the area of social services because no official data is available to identify the need based on the size of the population. So programs provide translation services and many other services to outreach to targeted ethnic groups that are identified in the U.S. Census. The U.S. Census currently asks for your race when you fill out the form by listing certain ethnic and racial identity categories. The forms include Hispanic, Latino or Spanish origin. And they ask if you are Mexican, Mexican American (I didn’t know there were two categories of Mexicans), or Chicano. What kind of race is Chicano? What country do Chicanos come from? Chicanostan?

They ask the same question again on the long form: Are you white? Black, African American or negro? Are you American Indian or Alaskan Native? They even give you a place to write in your tribe name.

That’s not all. The form asks if you are Asian Indian, Japanese, Native Hawaiian, Chinese, Korean, Guamanian or Chamorro, Filipino, Vietnamese, Samoan or other Asian. They give you a space so you can print your “race” like Laotian, Thai, Pakistani, Cambodian “and so on.”

Oh, they don’t stop there. They ask if you are Pacific Islander and ask you to print your race like Fijian, Tongan “and so on.”

Way at the bottom, in case they missed someone, someone not so important, they have the throw-away line, to check here if you are “Some Other Race – Print Race.”

Why are some ethnic groups listed and others are not? There is a reason and the reason has to do with empowerment. By including some ethnic groups, the government is empowering those groups by identifying their strengths. By excluding other ethnic groups, the government is weakening those groups. That undermines the empowerment of American Arabs, who have been traditionally excluded, but it increases the use of “profiling” as a negative and hostile means of identifying Americans Arabs.

It needs to change.

American Arabs are as patriotic and maybe even more patriotic than many other ethnic groups. We have served and continue to serve in the U.S. Military, even as the U.S. Military has targeted our ancestral countries of origin. We’re defending America and playing crucial roles in helping to protect this country, yet our patriotism is not being acknowledged. 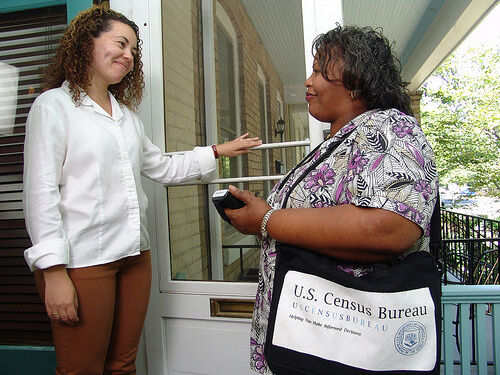 We pay our taxes. We’re good citizens. But because we are on the receiving end of the worst forms of discrimination and civil rights violations of any ethnic group, we have no protections. I say “worst” because while other ethnic and racial groups like African Americans continue to suffer, especially as we have seen recently as victims of police brutality, the African American community has a massive support system that comes from the Government’s recognition of their rights. They get funding. Their organizations get recognized. Their leaders are invited to sit at the table when power is disbursed and funds are handed out. Those government funds come from all taxpayers and they share in them.

But not American Arabs. American Arabs pay taxes and we deserve to benefit from those taxpayer funded programs that help almost every other ethnic and racial group in this country. That must change.

When people are excluded, that exclusion feeds extremism. It nurtures extremism. It creates circumstances where a few members of a community turn to the extreme and embrace violence as an answer to the frustration of being excluded, discriminated against, and marginalized.

Algerian Hirak: From Algeriana to My Best Enemy Abdennour Toumi