Last week Adam Raz wrote for the Israeli newspaper Haaretz, “Thirty years after the espionage case that rocked Israel and exposed its nuclear secrets, it can be asked whether Mordechai Vanunu is actually tool in the hands of vested interests.”

The top three definitions of “tool” at the Urban Dictionary are: A guy with a hugely over-inflated ego, Someone whose ego FAR exceeds his talent, intelligence, and likability, or Someone who others normally refer to as a prick, dick or schmuck.

The Sunday Times was very close to shelving the [Vanunu] investigative report, and that it was only the actions of some Israelis, whether by intent or not, that persuaded the paper to go ahead. In fact, one can even say that, if the paper had not published its investigation, there would have been no “Vanunu affair.”

Journalists in Australia had asked the Israeli Embassy there for information about the “eccentric” guy who was claiming to have worked at Israel’s nuclear reactor. And when Vanunu stepped off the plane in London, weeks before the story was published, he was already under surveillance. Throughout this period, the Israeli secret services did not contact Vanunu, nor did they make any effort to prevent him from giving interviews – which made the Sunday Times suspect that Israel was trying to dupe them…

On September 26, 1986, Prime Minister Shimon Peres summoned the editors of Israel’s newspapers to a “closed” meeting (which was soon reported by the Israeli and world media), at which he told them about the report that was going to appear in the Sunday Times… it was the panic that prevailed among Israeli authorities that persuaded the paper that Vanunu was for real…

To this day, the state insists that Vanunu continues to constitute a risk because of the information in his possession – information to which he had access in his work at the nuclear center more than 30 years ago – that still has not been made public… its definitely possible that the Sunday Times did not publish all the material its staff extracted from Vanunu. 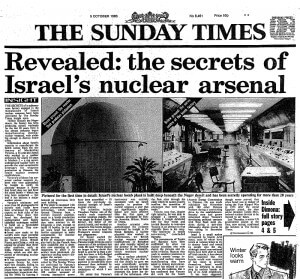 To this day London’s Sunday Times still possess Vanunu’s two rolls of film that he obtained from top-secret locations in the Dimona nuclear facility during a few harrowing hours on the night shift while Vanunu performed his routine duties as a mid-level technician.

As of this publication my two comments at the Haaretz article by Adam Raz remain the only two published and follow here:

1. Before Vanunu went silent he told this American writer

Who became a reporter in 2005 after Vanunu told me: “The French were responsible for the actual building of the Dimona. The Germans gave the money; they were feeling guilty for the Holocaust, and tried to pay their way out. Everything inside was written in French, when I was there the Dimona descended seven floors underground… Did you know that President Kennedy tried to stop Israel from building atomic weapons? In 1963, he forced Prime Minister Ben Guirion to admit the Dimona was not a textile plant, as the sign outside proclaimed, but a nuclear plant. The Prime Minister said, ‘The nuclear reactor is only for peace.’ Kennedy insisted on an open internal inspection. He wrote letters demanding that Ben Guirion open up the Dimona for inspection. When Johnson became president, he made an agreement with Israel that two senators would come every year to inspect. Before the senators would visit, the Israelis would build a wall to block the underground elevators and stairways. From 1963 to ’69, the senators came, but they never knew about the wall that hid the rest of the Dimona from them. Nixon stopped the inspections and agreed to ignore the situation. As a result, Israel increased production. In 1986, there were over two hundred bombs…”- Excerpted from “BEYOND NUCLEAR: Mordechai Vanunu’s FREEDOM of SPEECH TRIAL: And My LIfe as a Muckraker” by Eileen Fleming

2. What Vanunu said about Mossad trap

In 2006, this American asked Vanunu about Cindy/Cheryl Bentov, the Mossad agent who in 1986 lured him to Rome after meeting him in London. Vanunu looked me in the eye and readily replied: “It wasn’t like THAT! When Maxwell’s paper published my photo without ever talking to me and some of the stolen Dimona photos with a very bad story against me, I knew the Mossad was after me. Cindy said she had a sister in Rome and I thought I would be safe there until I could return to London. We went to movies and art galleries, I trusted her. But, as soon as I got into the apartment, I was hit on the head and drugged. When I woke up and they took me for interrogation, they threw the Times article on the table and said, ‘Look, what you did.'”-Excerpted from “Heroes, Muses and The Saga on Mordechai Vanunu” by Eileen Fleming

I now add that everything of importance Vanunu told this American during my eight investigative journeys in Jerusalem since 2005 have been enshrined in articles, books and also stream at YouTube.

Raz rightly concludes: “Many of those who are critical of the restrictions imposed on Vanunu maintain that the state and the current director of security of the defense establishment are trying to extract revenge from him for having exposed publicly Israel’s holy of holies – the secrets of the nuclear reactor at Dimona… in one of the documents published by WikiLeaks: “The [Israeli government] is only contributing to the international cult around Vanunu in its continuing campaign against him. Vanunu’s revelations in 1986 did nothing to set back Israel’s nuclear program, and we have difficulty imagining that anything he says or does today could harm the program or otherwise damage Israeli national security.”

In 2015 Vanunu fired me as a supporter, disrespected me as a reporter, slandered then blocked and censored me.

Details can be read HERE

I leave it to the reader to decide if Vanunu is a tool.

This American is shining a spotlight on Vanunu in the screenplay “This American and Israel’s Nuclear Whistle Blower Vanunu” which is currently being read by a few Hollywood Producers.

TRUE STORY based on research and this American’s 2005 interviews with Mordechai VANUNU, Israel’s nuclear whistle-blower who had been living in east Jerusalem since his release from 18 years behind bars convicted of treason and espionage.

In 1986, VANUNU provided London’s SUNDAY TIMES two rolls of film from Top Secret locations within Israel’s Dimona nuclear facility, which he shot during a few harrowing hours working the night shift as a nuclear technician.

In 2005, a serendipitous meeting with VANUNU after THIS AMERICAN’s gut wrenching day in Hebron begins and wraps up this movie based on stories VANUNU shared about his Orthodox Jewish childhood, adolescence, crisis of faith, army service, university activism, obtaining photos from Top Secret locations, leaving Israel, being kidnapped by Mossad in Rome and transported back to Israel for a closed door trial and 18 years behind bars, mostly in solitary confinement. ###

This April 21 marks fourteen years since Vanunu emerged from 18 years behind bars, mostly in solitary confinement. In this excerpt from “30 Minutes with Vanunu” he addresses Israel’s intentions: 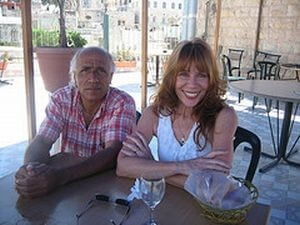 Children among those evacuated from Eastern Aleppo, Syria Arab World

Yoga Nidra Can Free You From Insomnia and Pain Bloggers