The logline for the film “Secret Weapon” listed at the Internet Movie Database/IMDb reads:

The story of nuclear technician Mordechai Vanunu, an Israeli pacifist and government employee, who committed an act of treason in 1986 by informing the British press that his country is working on a nuclear bomb.

“Secret Weapon” was an American-Australian production released in 1990 and available at Amazon on VHS format. 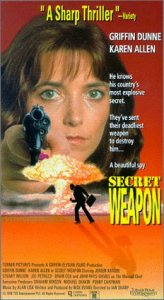 On 16 December 2004, Amazon published the first and so far only review of “Secret Weapon”:

Great Spy Flick!!!
This is a great spy flick based on a true story about an ex- technician trying to expose a country’s nuclear weapons program. It’s a must see!!

I have not seen the movie but I did discover this trailer at YouTube:

The logline for the screenplay “This American and Israel’s Nuclear Whistleblower” reads:

A serendipitous meeting in Jerusalem between this American and Israel’s nuclear whistleblower Mordechai Vanunu led to a series of interviews, which this screenplay is based upon. In 1986 Vanunu was convicted of treason and espionage. In 2004 his 18 years in jail ended under draconian restrictions including he NOT speak to foreigners which continue to this day.

Three Hollywood producers have so far requested to read the screenplay.

During my 2005 interviews with Vanunu I told him –and vowed to God- that I would report the Vanunu saga UNTIL Israel allowed Vanunu to leave the ‘only democracy in the Middle East’ and so this American will persist in the way she has been going which has been to persistently report, and as Calvin Coolidge encouraged:

Nothing in this world can take the place of persistence. Talent will not; nothing is more common than unsuccessful men with talent. Genius will not; unrewarded genius is almost a proverb. Education will not; the world is full of educated derelicts. Persistence and determination alone are omnipotent.

As a noun Omnipotent means “God” and as an adjective it means “able to do anything.”

As I cogitated upon that Philippians 4:13 came to me: “I can do all things through Christ which strengthens me.” 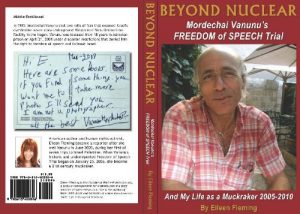