On Palm Sunday 2015, Israel’s Nuclear Whistleblower Mordechai Vanunu resurrected his Facebook and Causes connections which ended my Administrative duties over the last three years while Vanunu was on sabbatical from the WWW.

Vanunu inherited 21,000+ supporters at what had been known as TNT/Telling Nuclear Truths which he re-christened “Mordechai vanunu”.

Vanunu is also now leading 5,700+ Facebook friends to learn more about his 29 years of telling the truth about Israel’s nukes.

What prompted Vanunu’s second coming was his Cases of Libel and Extortion Security and Press featuring Israel’s largest newspaper by way of sales and circulation: Yedioth Ahronoth over their slanderous fabrication.

Israeli extortion by Media was enabled by Israeli Justice system for all worship a god called SECURITY!

I begin with words Vanunu spoke to me in June 2005 published in BEYOND NUCLEAR: Mordechai Vanunu’s FREEDOM of SPEECH Trial and My Life as a Muckraker: 2005-2010 and end with my emails to YNet. 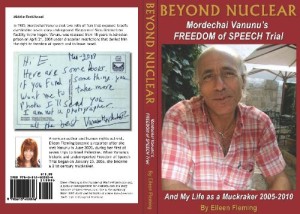 In June 2005, during my first of 8 trips to both sides of The Wall in Palestine Israel, I asked Vanunu, “How was it being crucified for telling The TRUTH?”

My human rights have been denied me because I am a Christian. When I was on trial, I was treated just like a Palestinian: no human rights at all, and cruel and unusual punishment, all because I told the truth.

The government spread slander about me, that I was a homosexual, that I hated Jews, that I wanted fame and money.

What I did was sacrifice my life for the truth.

In prison, I really began to feel like Jesus and Paul. When Jesus threw the money changers out of the temple, it was like me in Dimona, exposing the Israelis’ dirty secrets. I felt like Paul, being thrown in prison for speaking the truth.

The only real way to worship is in loving one’s enemies. It was not easy to love my tormentors; it was only because I felt so much like Jesus crucified on the cross, and as if I was crucified in prison, that I could do it. It was not ever easy. I have forgiven but not forgotten anything, and I never will. In Israel, a life sentence is twenty-five years. Even murderers go free after seventeen.

They imposed the same restrictions on me that Palestinians receive: no human rights at all; no phone; no visitors, except family, and only through an iron grill; no vacation; no holidays; and no gifts. Even murderers get out for vacations!

I was locked up for eighteen years and still cannot go on vacation; I cannot leave, and that is all I am asking for, just to leave here.

They held my body, but never my spirit or mind.

I asked, “WHY did you become a Christian?”

I really had no clue what I was doing by getting baptized a Christian; I just felt like I had to do it. It was my way to become a new being.

I did this for myself, as well as for my captors–not so much the prison guards, but the ones who watched me on camera twenty-four hours a day. Once I covered up the camera that spied on me and was punished with one month in solitary, without any books or radio; no contact with anyone anywhere was allowed.

The Shen Beet, you know, like the FBI and the Mossad, like your CIA— they were watching me.

They tortured me by keeping a light on in my cell constantly for two years.

They told me it was because they were afraid I would commit suicide, and the oppressive camera was for my safety.

They recruited the guards and other prisoners to irritate me. They would deprive me of sleep by making loud noises near my cell all night long. I chose to read them 1 Corinthians instead.

Love is patient, love is kind. It does not envy, it does not boast, it is not proud. It is not rude, it is not self-seeking, it is not easily angered, and it keeps no record of wrongs. Love does not delight in evil but rejoices with THE TRUTH! It always protects, it always trusts, always hopes, and always perseveres. Love never fails. 1 Cor. 13:4-8

Emile Zola said, “The Truth is on the march, and nothing shall stop it…If you shut up The Truth and bury it under the ground, it will but grow, and gather to itself such explosive power that the day it bursts through it will blow up everything in its way.”

This reporters message to Israel and ALL concerned about Iran’s Nuclear Program is a quote from 1946:

“You cannot talk like sane men around a peace table while the atomic bomb itself is ticking beneath it. Do not treat the atomic bomb as a weapon of offense; do not treat it as an instrument of the police. Treat the bomb for what it is: the visible insanity of a civilization that has ceased to obey the laws of life.”– Lewis Mumford

A few hours before Vanunu concluded our June 2005 interviews by telling me how Israel deceived JFK and LBJ and Nixon played along by ignoring the situation and helped create THIS REPORTER, Vanunu said:

The only answer to Israeli nuclear weapons, their aggression, occupation and oppression, and the wall and refugee camps is to answer them with truth and a peaceful voice.

When I became the spy for the world, I did it all for the people of the world.

Daniel Ellsberg did, the woman from Enron did, and I did.

The United States needs to wake up and see the truth that Israel is not a democracy, unless you are a Jew.

Israel is the only country in the Middle East where America can right now find WMDs.

America can also find where basic human rights have been denied Christians: right here in Israel.

The time has come for the United States to see the truth of Zionism.

It began as a secular nationalist movement, not a religious one.

Then some Christians believed that when Israel became a nation, it was the beginning of the second coming.

They are deluded if they believe peace will come through atomic weapons.

Christians should be the first people against them.

America needs to wake up to this fallacy that Jesus will come back by nuclear war.

America needs to wake up to the fact that the Palestinian Christians here have no human rights.

Aren’t Christians supposed to be concerned about other Christians?

Aren’t Christians supposed to be concerned about all the poor and oppressed?

YES if they truthfully be called Christian!

This is my third and final email to you before I publish my followup to Mordechai Vanunu: Cases of Libel and Extortion Security and Press on Friday 9 AM EST.

I also seize this opportunity to attach the Petition to World Media and Israel: We are not free, until Vanunu is free! with over 10,000 signatures.

Thank you for your response to it and my original email with one change: I emailed The NY Times my Exclusive today and Yedioth Ahronoth was featured…

Please note I have included my editor, Vanunu and a few of his friends regarding your organization in Vanunu’s Cases of Libel, Extortion, SECURITY and Press.

I am seeking your response to THIS REPORT for inclusion in the next chapter of my FREE eBook, The Vanunu Legend: Israel’s NuclearWhistleblower’s Struggle for Freedom.

I also seize this opportunity to share what Daniel Ellsberg wrote:

Again, I will be happy to contribute to meet Mordechai’s needs in Israel (or outside, if and when that happy day comes).  But I DON’T want to contribute to a fund that will go to meet the outrageous demands of this newspaper UNLESS and BEFORE that is the last requirement to be met before he is allowed to leave.

Simply paying them off in hopes that that may somehow soften the hearts of the Israeli government to rescind the other conditions doesn’t seem reasonable to me.

NOR TO ANY AMERICAN!!!

You should also know that in 1999, Vanunu’s USA adoptive parents Mary and Nick Eoloff were the catalyst to move thirty-six members of the US House of Representatives to sign a letter calling for Mordechai Vanunu’s release from prison because they KNEW “we have a duty to stand up for men and women like Mordechai Vanunu who dare to articulate a brighter vision for humanity.”

Read the preceding chapters to this article in the FREE eBook:

Future of Middle East: Between a rock and a hard place Arab World