Three-day International Symposium held in Ankara, Turkey explores the challenges facing Syria, its history, politics, and foreign policy, hosted by the SDE Institute of Strategic Thinking in collaboration with Yildirim Beyazit University. Also explored, the Armenian Massacre, the Western divisions of the Arab World, and the Kurdish movement for statehood

Ankara, Turkey — Without any doubt, Turkey has become the hyper-center of the Middle East turmoil whether weighed against the situation in Yemen, the Iranian nuclear program, the so-called Israeli-Palestinian peace process, or even the on-going Syrian civil war. It’s not only random Turkish people living in the border provinces of Hatay, Antep, Urfa and Mardin who feel the pressure.

The Syrian question is haunting politicians like the Kemelist, social-democratic party (CHP wants to send the Syrians back home) and academicians, who might not yet get  the “miracle” solution, but all agree, none will be the winner or the loser.

This weekend the SDE Institute of Strategic Thinking, in collaboration with  Yildirim Beyazit University, held a three-day International Symposium in Ankara on Syria, its history, politics, and foreign policy.

National and International panelists from Turkey, the U.S., the U.K., Israel and Syria spoke regarding the complex relations that exist between Syria and Turkey, despite the fact that they share more than 800 km border. More than seven million Syrians have been displaced and moved within the country and nearly three million have fled to neighboring countries. Around two million have entered Turkey and are living either in the twenty-three camps run by AFAD (Disaster and Emergency Management Presidency) or in the urban and suburban areas of neighboring cities. Turkey has spent five billion dollars on humanitarian programs and is running out of cash.

Since the Arab uprising in November, 2010, Turkey has engaged directly in the political and societal changes taking place in the Arab World(s). As a result the country has been seen as a “trouble maker,” not a “peace maker,” in the eyes of the Arab establishments and the radical secularists.

The Symposium talks were exclusively academic and as such offered less credible prospect solutions for the near future. All the speakers were prudent in their predications and analysis because of the sensitivity and the complexity of the topics.

At the end of the Conference, I had an opportunity to meet with Professor James L. Gelvin, Professor of Modern Middle Eastern History at UCL, USA in a cordial exchange regarding the situation in Syria, the potential outcome of this crisis, and the prospect of the Arab revolts in general.

I asked him about the Sykes-Picot Accord of 1916, which is considered the birth certificate of the Arab states and the source of the current boundaries of the region. In Professor Gelvin’s opinion the two foreign Ministers were either poorly quoted historically or misjudged by future generations. The French and the British were joined by the Russians to draw up the boundaries. As an expert on the Middle East, he sees this historical landmark playing well into the hands of el-Qa’aeda and ISO in their dystopian vision to establish the Caliphate.

In reviewing the Sykes-Picot map of the region he noted that Jerusalem is not on the map, the British are not in Iraq, the French are not in Anatolia and the Russians don’t control the Strait. “There were problems after World War I with all those treaties, some of them were ambiguous,” Prof. Gelvin stated. 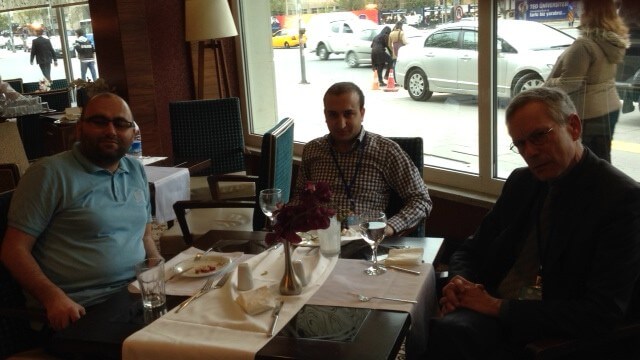 Even in Lord Balfour’s declaration of 1919, Prof. Gelvin continued, there is no “international law” that calls for a home for the Jewish people, only states and colonies  recognized it. Further, I asked him about the possibility of a State for the Kurdish people, who seem to be gaining some leverage from the crisis in Syria and Iraq.

In his view, Ankara will never allow (a Kurdish State) to happen in their own backyard.

He was frank in his answer, “…it won’t be a Kurdish State….there is too much at stake, Washington has already taken Ankara’s side. In mentioning the Armenian question, “President Obama did not use the term ‘genocide’ which is disgraceful according to Prof. Gelvin.

There are several persistent problems regarding the Kurdish question. First of all, they have an autonomic zone and secondly, there is no single national Kurdish movement. I asked Prof. Gelvin about the Kurdish Syrians who are looking at the KRG model but his answer was clear. It brings up the question of natural gas resources in the  Rojava region, there is no oil as in North Iraq. 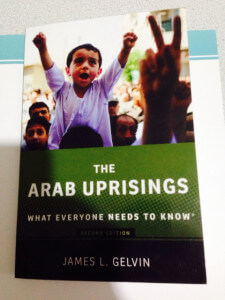 The Kurds in Syria might achieve some form of autonomy, but not full autonomy. The arabization of the Kurdish territory by the Ba’ath regime disfigured the provincial borders and they are split; the Kurdish society is not a monist one. I found in Prof. Gelvin’s analysis an astonishing analogy between the Kurdish and the Palestinian nationalist movement, cronyism and clannish topping the organization.

The question is, what of the Turkmen, who live in Iraq and Syria, what will be their fate?  It is impossible to predict a clear future, ethnic cleansing is not avoidable so the situation may become even messier. The region experienced such cleansing since the Nekba, according to Prof. Gelvin.

Therefore a clear political discussion needs to take place regarding these issues. So far the Kurds have played a successful role in holding territory for which they as a people are justly proud.

Later I asked Prof. Gelvin about the concept of the modern state in the Arab World(s).  In his view the Arab states won’t melt, though I tried to counter his view giving him examples, for instance, in Sudan, Somalia, Libya and eventually Yemen.

Prof. Gelvin’s argument is more geo-political. In particular he emphasized the peripheral states from the Gulf of Aden to the Mediterranean shores. For him, there is no alternative to the concept of the nation-state — at this point, el-Qae’eda and ISO are calling for Caliphate, but the people of the Arab World(s) are not looking for that model!

We ended our discussion on the so-called Arab Spring, a media selling point. Prof. Gelvin doesn’t care for this phrase as it was used by the neo-cons in D.C. when they were cheering for their “happy ending” story in Iraq in 2003. In 2005 Kuwait and Saudi Arabia held general elections…he prefers the “Arab Uprisings,” which is also the title of his book.

In Prof. Gelvin’s opinion, there won’t be a winner in the Syrian tragedy. This is the conclusion agreed upon by all the panelists at the Conference on Syria. In his view, the dynamic of the on-going conflict will end in stalemate because of the many stakes that the regional and international players have in the country.

Subsequently, Prof. Gelvin offered a ray of hope to all the people in MENA, who are fighting for human rights and democracy by referencing the French revolution. It took Europe a century to gain a paradigm of nationalism and liberalism. The Arab revolts only go back to the ’80’s starting with the Berber Spring, in 1980 in Algeria, the first Palestinian Entifedha in 1987, October 5 in 1988 in Algeria, to the Kefaya movement in Egypt in 2008.

The Arab uprisings are at the same stage of revolt as the French in 1848. As a result the second French Republic emerged, but MENA is still in 1790, so the fight goes, the cause endures and hope still lives.