On Monday from Jerusalem Mordechai Vanunu took to Twitter to report on today’s Supreme Court appeal seeking to end the restrictions placed upon him when he emerged from 18 years behind bars on 21 April 2004.

Vanunu explained, “Nothing Change. Today the court heard my appeal; asking the 3 judges to intervene to, allow me to leave this country. The Israel govt. by its lawyer repeat the same accusations, that I am a security risk for them because of all the nuclear secrets from 35 years ago. So the court will make its decision in the next weeks, nothing change, continue to wait for freedom Now!” 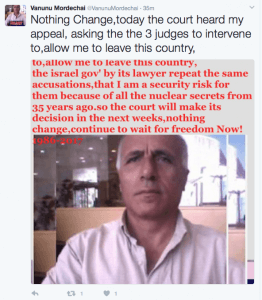 Jerusalem Magistrates Court has convicted Mordechai Vanunu of violating restraining orders imposed since his release a decade ago after spending 18 years in prison for leaking Israeli nuclear secrets to the media.  In its verdict on Monday the court also acquitted Vanunu of violating two other orders.

This reporter submitted the following comment on January 24; but did not receive the email from Haaretz notifying me they published it until today January 30.

Comment:
Israel announced the verdict on Monday but on 18 January Vanunu Tweeted he was convicted of speaking to 2 internationals [in 2013 and I know one of them] but not on the 2 other ludicrous charges.

On 22 January Vanunu TWEETED that he will return to Israel Supreme Court on 30/1/2017 “Asking the Israel Justice court to cancel the restrictions, one of them is not to leave the state…”

In 2015 the 60 year old Vanunu wed for the first time to a foreigner! She is a Professor of Hebrew Scriptures and has filed all the paper work for Vanunu’s asylum to Norway.

Vanunu told Channel 2 he is “done with the nuclear issue” and all he wants is to leave Israel.

Because Israel has persisted to refuse Vanunu the right to fade into the world THIS AMERICAN has persisted to tell the Vanunu Saga in articles and books ever since I met Vanunu in 2005 during my first of 8 investigative journeys to both sides of The Wall. -Eileen Fleming THIS AMERICAN is also Senior NON-Arab Correspondent for USA’s TheArabDailyNews

Please read more about THIS AMERICAN’s work in progress:
Vanunu Mordechai, THIS AMERICAN and The USS LIBERTY Documentary

Netanyahu at the UN and the War on BULLSH*T! American Arabs