It looks like your computer is being affected by malware. We’ll help you fix the problem to keep your account secure and prevent malware from spreading to friends. Malware is software that tries to steal personal information and causes problems when you use Facebook

Facebook offered to ‘fix’ this reporters computer by following their LINK.

I did contact APPLE support and shared a screen with Hunter who verified my IMac was clean.

Hunter said he had also seen same Facebook message on other screens of customers who had complaints registered against their expressions of freedom of speech with the powers that be at Facebook.

This reporter’s Facebook Wall is open to ALL because I do NOT socialize on Facebook- I use it to exercise my freedom of speech and conscience.

Over the last few weeks ALL my postings have been regarding the USS LIBERTY and in particular the Establishment of every June 8 to be known as USS LIBERTY REMEMBRANCE DAY.

On this June 8, I honored the USS LIBERTY by collecting Petitions in Deland, Florida. 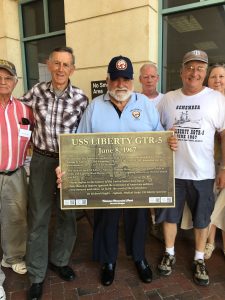 Friends of the USS LIBERTY raised awareness that Wednesday marked the 49th ‘anniversary’ of Israel’s attack on America’s premier SPY ship as it navigated in international waters during the Six Day War.

I stressed the issue NOW is to end 49 years of a USA Government Coverup before the 50th ‘anniversary’ on 8 June 2017.

In the June 2016 issue of FRA Today [a congressionally chartered non-profit which advocates for current and former members of the U.S. Navy, Marine and Coast Guard], Gallo referred to his experiences of bigotry:

We’ve been made to appear as bigots and the lies frustrate our efforts to distance ourselves from neo-Nazi organizations and other anti-Jewish groups.

Our government put the Israeli relationship over and above the crew and, time after time, the eyewitnesses of the attack are called conspiracy theorists.

Because the events involved Israel and are compounded by a state lie, we are automatically labeled a bunch of whiners.

I guess we are supposed to keep our mouths shut. I suppose if no one was killed or wounded, we could possibly do that.

However, [Israel] attempted to murder 294 Americans. We would be remiss as Americans if we did not speak out and our 34 shipmates would have died for nothing.

It’s easy for those who want this kept under wraps to call us names such as anti-Semitic.

You can call us what you want, but common sense will tell you that almost three-fourths of the crew were Communications Technicians.

All of them, including me, held a security clearance with the government. So we were considered the most trusted men in the Navy.

Do you really think we banded together to lie about what we saw?

Do you really think that these men banded together after the attack, and decided to become racists and haters of Jews, when some of the crew were Jews?

I ran a guy off our show because his remarks were entirely against the Jewish faith. We wouldn’t tolerate his remarks. 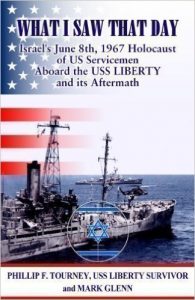 On 8 June 1967, Larry Bowen was a 21-year-old Radioman aboard the USS LIBERTY when he “heard what sounded like large, heavy deck chains being dragged across the deck. It was rocket and gun re coming from the Israeli strafing attack. We heard the General Quarters call, followed by ‘This is not a drill.’ I was below decks, so I didn’t have a visual perspective, but there were several flights that sent rockets, armor-piercing .50 caliber rounds, cannon fire and napalm down on us.”

I don’t think there’s any need to discredit anyone. We’re not anti-Jew or anti-Israel, just disappointed that the two governments couldn’t get together and tell the truth.

We don’t expect any additional compensation; we just want the American public to know the truth…I think that might bring closure or appease some of my shipmates. There are some who will never get over it.

I lived through it and I’ll never forget

It’s painful to recall it and brings tears to my eyes sometimes, but that’s part of getting through it. The bond between the Liberty shipmates is extremely strong. We lived through it together; we’re brothers and that bond will never be broken.

49 years after the USA Government began a hellacious cover-up of their failure to support the USS LIBERTY troops;

The good news is the USS LIBERTY Veterans are garnering growing numbers of supporters!

At the top of that list is Jason Davis, the first elected official to sign the USS LIBERTY Petition! 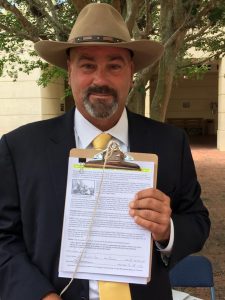 The Volusia County Chairman is also a Veteran of Foreign Wars, who joined the U.S. Army, Military Police Corps and served in the infantry.

This reporter will be contacting Davis to thank him for being a Leader.

This reporter also recently ‘stumbled’ into organizing the USS LIBERTY VETERANS Nationwide Speaking Tour, which continues on in Florida and in July moves onto North Carolina and possibly Alabama. Come September the USS Liberty Veterans will be speaking in Colorado and Arizona.

Ol’ Sarge Bryce Lockwood joins the tour in North Carolina in July, but you can hear him now at YouTube:

I have alerted the powers that be at Facebook to this article so this story will be continued!