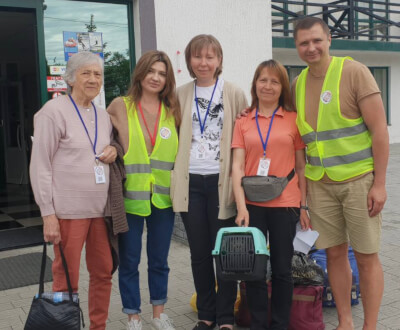 Project DYNAMO rescues more than 600 people from Mariupol, Ukraine over the last week

MARIUPOL, Ukraine – Over the last few days, more than 480 people, including pregnant women, children and infants, were rescued – including one medical evacuation (MEDEVAC) – from the Russian-occupied territories of Mariupol and Kherson, to Zaporizhzhia and then onward to the Poland and Romania by members of Project DYNAMO following the fall of the strategic port city to Russian forces after a nearly three-month siege.

About 35 miles east of the Russian border, much of Mariupol has been reduced to rubble and smoke from continuous bombings and military clashes between Ukrainian and Russian forces since the beginning of the war in late February.

With Russian air bombardment, artillery, and indiscriminate attacks on civilians, including the targeting of hospitals, schools, and evacuation routes, Ukrainian officials fear that more than 21,000 civilians across the city may have been killed.

Of the approximately 450,000 people who lived in Mariupol before the conflict, only about 100,000 remain trapped without food, water, electricity or a means of escape many of whom are wounded and cut off from all support.

With 33 separate tactical operations, codenamed APOLLOs, utilizing a fleet of 52 different vehicles, Project DYNAMO rescued innocent civilians attempting to flee the Russian-occupied territory from their homes and various meeting places throughout Mariupol and surrounding areas before rendezvousing at a rally point and making their way to safety in Ukrainian-held territory.

The Project DYNAMO fleet had to traverse through a collective total of over 900 Russian military checkpoints – sometimes taking up to three nights to complete for each convoy – and more than 20 Ukrainian checkpoints from Zaporizhzhia to the Romanian border.  The mass rescue operation spanned 4 days and nights to complete following an approximately 1,200-kilometer journey across the Ukraine war zone.

After completing their treacherous journeys from Mariupol and Kherson, some of those rescued were evacuated immediately out of Ukraine through Poland, while the majority were secured at an undisclosed safe location operated by Project DYNAMO until their evacuation to Romania.

“Project DYNAMO operates where people need help and others cannot operate.  I can’t imagine another city in Ukraine that needs assistance more than Mariupol that is hard to get access to,” said Bryan Stern, co-founder of Project DYNAMO. “This is the same territory that [Russia] bombed a school, shot missiles at a hospital, dug mass graves, and committed other atrocities that go against the conventions of war.  This is Ground Zero of Ukraine and Russian targeting of civilians.  Everywhere you look, all you can see are remnants of what used to be a thriving city. Now, pretty much everything lies in smoke and ruins.  Mariupol looks like Ground Zero after 9/11 times a hundred with the suffering of civilians to match.”

On March 9, a maternity and children’s hospital was struck by a Russian airstrike, killing at least five people and wounding at least 17. Videos circulated on social media and online shortly after of pregnant women being escorted and carried out of the bombed-out hospital to an apocalyptic scene of burning cars, as well as debris and ash raining down.

In April, satellite images revealed what appeared to be mass graves just outside Mariupol, where local officials accused Russia of burying up to 9,000 civilians to cover their war crimes.

“Project DYNAMO has become quite a student of the war crimes directed against civilians at the hands of Russian forces,” said Stern.  “It seems that many of our recent operations and cases have a nexus with these heinous acts committed and sanctioned by an organized Army.  As a donor-funded organization, Project DYNAMO will continue to operate and rescue as many civilians as possible from the clutches of Russian aggression as long as our funding allows.”

On May 1, the International Committee of the Red Cross (ICRC) attempted to evacuate 100 civilians from Mariupol after an attempt in early April faltered due to hostilities on the ground where their convoy was turned back.

Last week, Ukrainian soldiers barricaded inside the Azovstal steel plant — the last stronghold for Ukraine in Mariupol — surrendered to Russian forces, concluding months-long resistance efforts. The Russian ministry claims 2,439 Ukrainian fighters have surrendered over the past week and have been taken prisoner by Russia.

The fall of Mariupol into the hands of Russia now completes a land corridor between Russia and the Crimean Peninsula, which was seized by Russia in 2014.  According to military experts, this was a key strategic and tactical goal of President Putin from the onset of the war.

With the completion of these latest APOLLO operations, Project DYNAMO has now rescued more than 1,400 people from the most war-torn, contested, and Russian-occupied areas of Ukraine and transported them safely to neighboring countries including APOLLO-humanitarian convoys, GEMINI-newborn surrogate babies, AQUARIUS-pregnant surrogate mothers, ARIES-medical evacuations, ATLAS-special needs civilians, VOYAGER-Holocaust survivors, and ORION-special cases including the daring unilateral rescues of American Citizens Robert Platt and Kirillo Alexandrov.

Anyone in need of evacuation is urged to register at www.projectdynamo.org and register for the U.S. State Department’s STEP program.

Those interested in donating to or learning more about Project DYNAMO can do so by visiting www.projectdynamo.org.