The Chamber has been active fighting for the rights of Arab and Muslim store owners, last year preventing the closure of 22 Arab-owned Hookah lounges in Chicago and in September 2021 preventing Mayor Lori Lightfoot from closing nearly 100 Arab and Muslim owned gas stations and grocery stores. The action prevented the loss of more than 700 employee jobs and forced Lightfoot to back down on her racist and discriminatory Task Force policies.

In addition, the Chamber has been working hard to secure nearly $1 million in property tax refunds for Arabs and Muslims hosting “Refund” workshops with Cook County Treasurer Maria Pappas at locations including SANAD, the Orland Prayer Center, the Bridgeview Mosque Foundation, St. George Antiochian Orthodox Church, the Islamic Community Center of Illinois and on Friday, Nov. 12, the MECCA Center.

“We are about Action, not talk. We roll up our sleeves and fight to save and protect our Arab and Muslim businesses, and all businesses in Chicagoland. We give them voice so they can work, pay their taxes and earn a living for their families. And we are working to help property owners to obtain tax refunds from the county,” said American Arab Chamber of Commerce President Hassan Nijem.

“The dinner on Dec. 9 isn’t to pat ourselves on the back or give ourselves awards. It is to publicly thank the officials who have worked hard to help us protect our businesses and ensure we pay our fair share of taxes and nothing more. Those officials include Cook County Treasurer Maria Pappas, and Chicago Aldermen Raymond Lopez and Silvana Tabares. Lopez and Tabares did not hesitate to defend the rights of Arab and Muslim owned businesses and were instrumental in helping us stop discriminatory practices.”

Chamber members will present “Action” Awards to Pappas, Lopez and Tabares during the meeting and discuss plans to move forward working with the American Arab Anti-Discrimination Committee to prevent further discriminatory acts by Mayor Lightfoot.

Nijem said that the chamber estimates that there is more than $10 million that can be returned to Arab and Muslim property owners. It is a small part of the of the $100 million identified by Treasurer Pappas as outstanding for all taxpayers in Cook County.

“We have secured nearly $1 million in property tax refunds through Cook County Treasurer Maria Pappas and her staff that have helped at the workshops to complete the paperwork and process the refunds. This is real money that will be paid back to each applicant who has been identified as overpaying or failing to collect on reductions,” Nijem said.

“We believe that when the entire community is done in Cook County, when we reach all of the Arabs and Muslims, we can secure $10 million in refunds. We couldn’t do this without the leadership and commitment of Treasurer Pappas. She cares about all of the ethnic, religious and national communities in Cook County.”

Nijem said that on Friday at the Mecca Center in Willowbrook,, the Chamber and the Pappas workshop team helped identify an additional $52,000 that can be returned to Arabs and Muslims there.

Tickets for the dinner can be obtained through the Chamber by contacting Nijem and board members at info@aaccusaIL.org or by calling 312-927-6971.

We welcome everyone to attend the dinner and join in empowering our community, Nijem said.

To see the work of the Arab Chamber visit aaccusa.org/action 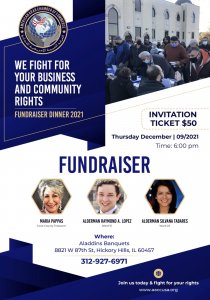 A letter from a reader on the Brannigan controversy American Arabs