This prestigious, private event marks a major milestone in the airway’s rapidly growing company which offers the complete package and experience for all clients traveling to Dubai or Abu Dhabi.

Yahala Voice team had the pleasure to attend the celebration of five solid years in Chicago for Etihad.

During this elegant event; professional businessmen and women were able to connect while enjoying hors d’oeuvres and an selection of fine desserts. Vice President Central USA, Denise Harvill started with a few opening remarks and ended by giving away four business-class, roundtrip tickets to Dubai in a drawing to two lucky individuals who attended that night.

First Etihad flight arrived in Chicago at O’Hare International Airport on September 2, 2009. Since then, the service in the Americas has expanded to include Washington D.C., Los Angeles, Sao Paulo, and twice daily flights from New York 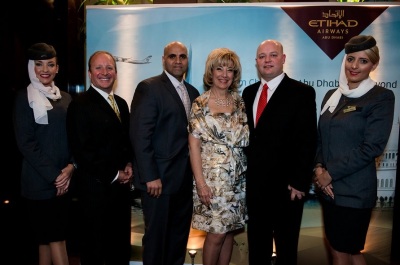 For the past 11 years, the national airline of the United Arab Emirates, has challenged the conventional ideology of airline hospitality by enhancing the ultimate experience and making way to different countries around the world. As of September 2013, the airline serves 96 destinations worldwide.

Etihad Airways also announced the introduction of upcoming cabins said to launch starting December 2014 during the celebration and showed a detailed video reel detailing the amenities within. Some of which will include a three-room suite on a commercial jet that features a living room, bedroom and bathroom and is said to be the most luxurious living space in the air.

Etihad Airways has also won numerous awards that validate their unique stature, including ‘World’s Leading Airline’ which was accepted at the World Travel Awards for five successive years.

Here at Yahala Voice, we too wish Etihad Airways Chicago a Happy Fifth Anniversary and years of continued success!

The first Cubs curse was by an Arab American Arabs