Israeli planes and torpedo boats attacked the USS Liberty on June 8, 1967 while navigating in international waters

34 US Sailors and Marines were killed and 174 wounded

The attack on the USS LIBERTY has never received a full investigation, as required by law.

Mr. Ross supported Mr. Trump’s Executive Order to curtail Muslim immigration stating, “This is long overdue. We must ensure our country is safe from radical Islamic jihadists who want to kill Americans.”

At Tuesday’s Town Hall Meeting in Clermont, Florida, this constituent sought a YES or NO reply from Representative Dennis Ross regarding Israel’s killing of American servicemen which has reaped a 50 year USA Government Cover-Up.

This American reporter provided Mr. Ross with the USS LIBERTY Petition, a letter from the President of the USS Liberty Veterans Association and I asked for a simple YES or NO to:

Do you support the establishment of USS LIBERTY Remembrance Day? 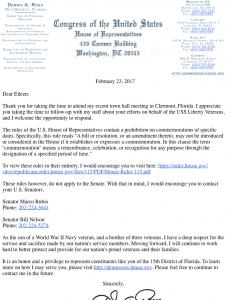 Congressman Ross sidestepped the issue by passing the buck to the Senate stating:

The rules of the U.S. House of Representatives contain a prohibition on commemorations of specific dates. Specifically, this rule reads ‘A bill or resolution, or an amendment thereto, may not be introduced or considered in the House if it establishes or expresses a commemoration. In this clause the term “commemoration” means a remembrance, celebration, or recognition for any purpose through the designation of a specified period of time.’ These rules however, do not apply to the Senate. With that in mind, I would encourage you to contact your U.S. Senators…

This reporter has contacted her Florida Senators regarding the USS LIBERTY multiple times over the last decade.

No reply has ever been received from Senator Bill Nelson’s office but Senator Marco Rubio usually responds with automatic replies to every issue claiming:

Thank you for taking the time to contact me. Your correspondence has been received and I welcome the opportunity to address your concerns. Hearing directly from constituents such as yourself is truly an honor, and your input is much appreciated. Please look for my response in the near future…

HOWEVER, in May 2015 I did receive the following email ‘response’ from Senator Rubio. I wrote to ask him if he would support the establishment of USS LIBERTY Remembrance Day. Rubio replied without responding to the question:

Thank you for writing to me to express your concerns regarding care for our nation’s veterans. I understand this is an important issue and I appreciate hearing your thoughts.

In recent memory the Veterans Affairs agency has been fraught with scandal over waitlist times and lack of appropriate care for our veterans. I helped author S.2450, the Veterans’ Access to Care through Choice, Accountability, and Transparency Act of 2014 and introduced the legislation along with Senators Bernie Sanders (D-VT) and John McCain (R-AZ). I am proud to say that this legislation became law and our veterans will receive the care that they were promised and deserve. Additionally, I am pleased that real accountability measures are included in the legislation.

Our nation should always strive to support our veterans who have sacrificed so much. I appreciate their sacrifices and will work to ensure our former servicemen and women are treated with dignity and respect. As we move forward, I will continue to be a strong advocate for veterans and work with my colleagues in the Senate to develop and pass meaningful legislation to improve our veterans’ care and quality of life.

It is an honor and a privilege to serve as your United States Senator. I appreciate you offering your opinion on this important issue.  If I can ever be of assistance to you, please do not hesitate to contact me.

This constituent will soon revisit Senator Marco Rubio and Bill Nelson at their Orlando offices regarding ending the USA government cover-up of the attack on the USS LIBERTY.

That report will be published HERE

In 2012, as a minority of one I flew to Virginia to attend the 2012 LIBERTY Political Action Conference.

I was able to accomplish two missions when I personally handed the following letter to Congressman Ron Paul along with a first and only press edition of  BEYOND NUCLEAR: Mordechai Vanunu’s FREEDOM of SPEECH Trial and My Life as a Muckraker: 2005-2010

Will you support the grass roots initiative that is seeking to establish every June 8th as USS LIBERTY REMEMBRANCE DAY?

In April 1999, thirty-six members of the US House of Representatives signed a letter calling for Israel’s Nuclear Whistle Blowers release from prison because they believed “we have a duty to stand up for men and women like Mordechai Vanunu who dare to articulate a brighter vision for humanity.”

Thank you for any reply, Eileen Fleming

The evening before at a private meeting with Senators Mike Lee [R-UT], Jim DeMint [R-SC] and Rand Paul [R-KY] and witnessed by at least thirty others, I asked those three Senators if they would support establishing every June 8th as USS LIBERTY REMEMBRANCE DAY:

Senator Rand Paul told me that I should not focus on old news!

Because “old news” affects today’s REAL NEWS, this American reporter persists to focus on LIBERTY and hypocrisy in high places. 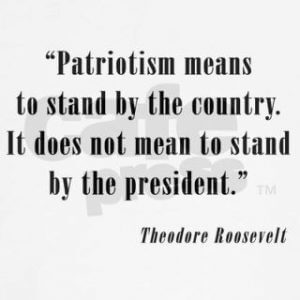 In September 2016, Prime Minister Benjamin Netanyahu met separately and privately with presidential contenders Hillary Clinton and Donald Trump. Afterwards Bibi noted, “It doesn’t matter which of them will be elected, US support of Israel will remain strong, our pact will remain strong and will even get stronger in the coming years.”

The spiritual battle being waged in the political realm began in the first century when most Jews rejected the message Jesus brought because they were looking for a Messiah who would set up a physical kingdom. (Luke 19: 11-28).

Jesus taught the kingdom of God was a spiritual and not earthly kingdom. Jesus promised, preached and entreated:

Blessed are the Peacemakers: for they shall be called the children of God.

And you will know the truth and the truth will set you free.

Father forgive them for they do not know what they are doing.

Only God knows what America’s Senators and House Representatives actually know about the USS LIBERTY.

The simple truth is that Congress has NOT investigated the USS Liberty incident.
AS STATED in the PETITION TO ALL OF CONGRESS provided to Representative Ross:

In 2003, an independent commission of experts convened including Admiral Thomas H. Moorer, USN, Ret. Former Chairman Joint Chiefs of Staff, General of Marines Raymond G. Davis, Rear Admiral Merlin Starling and Ambassador James Adkins. They concluded there was compelling evidence that Israel’s attack was deliberate and “Israel committed acts of murder against American servicemen and an act of war against the United States.”

The second for every appropriate committee of the Congress of the United States to investigate the actions of the White House and Defense Department that prevented the rescue of the USS LIBERTY including the NSA, CIA and military intelligence.

The third called for the establishment of every June 8 to be of known as USS LIBERTY REMEMBRANCE DAY.

Do you support the establishment of every June 8 to be known as USS LIBERTY REMEMBRANCE DAY?

This Story Will Be Continued!

Norman Podhoretz and the face of modernday hate American Arabs