US Representative Dennis Ross told the standing-room-crowd in District 15, Florida:

Many constituents held signs stating “Disagree” “BOO” “Nyet My President” and “No Pipeline.”

Congressman Dennis Ross has been an enthusiastic defender of Mr. Trump.

Mr. Ross was elected in 2010 during the Tea Party wave.

One woman told The New York Times she could not understand how Mr. Ross could oppose the presence of undocumented immigrants, given that the district was dependent on agriculture. “It’s so detrimental to our identity as a state and to the economy.”

It also negates the simple fact that America was made great because of immigrants!

This reporter was one of over 200 constituents riding the Women’s March wave who turned out to hold Congressman Ross accountable because “this is why we have a democracy.”

It’s absolutely overwhelming to see this turnout, and believe me I know there’s a lot going on. But this is why we have a democracy.

When Mr. Ross said he wanted to repeal and replace Obamacare/The Affordable Care Act, the crowd erupted in boo’s and chanted, “What’s the plan? What’s the plan?”

Mr. Ross did not reply.

However, he did say that as a member of the House Oversight Committee he would make sure to hold the president accountable.

The crowd loudly erupted after Mr. Ross mentioned Committee Chair Jason Chaffetz of Utah, who has said he would NOT look into Russian connections to Trump and his staff.

The Town Hall erupted with cries of “Lock Him Up” when a constituent noted Trump’s national security meeting on a public patio at Mar-a-Lago.

Congressman Ross responded, “When you have somebody who’s not a typical politician, you’re going to have mistakes.”

JoEllen Albertson of Clermont asked Mr. Ross if he would look into the millions of dollars Mr. Trump has spent in flying to and from Mar-a-Lago every weekend, citing estimates that it has already cost more than $10 million for one month, “an outrageous use of taxpayer money.”

Mr. Ross replied, “You’re the first one to bring this to my attention.”

The incredulous crowd erupted in a chorus of “BOO” and chanted, “oversight, oversight.”

Congressman Ross ended the town hall meeting early to the crowd’s passionate chanting of “Do your job.”

Mr. Ross left through a back door but not before This American Reporter and USS Liberty supporter handed his Chief of Staff Anthony Foti a copy of the USS LIBERTY Petition to Congress, the Letter to Florida Universities from Liberty Veterans Association President, and the names of the 34 USS Liberty crewmen killed on 8 June 1967.

This reporter did not wear her USS LIBERTY cap or her Press credential as in this photo, but I did wear the same USS LIBERTY t-shirt that is imprinted on the back with the names of the 34 USS LIBERTY crewmen who were killed on June 8, 1967. 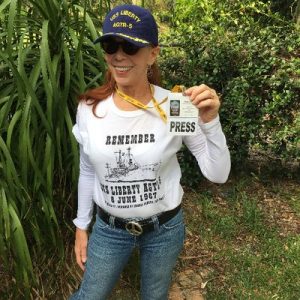 For most of the time I stood up on the left side of the front row so the names of the 34 crewmen would be in view.

The congressman’s Chief of Staff Anthony Foti passed me by on the Q&A, so I tapped him lightly with my right index finger on his arm to get his attention.

For a second I thought he was making a joke, but people who witnessed it explained he was afraid I was going to hurt him; despite the fact that over a dozen uniformed policemen hovered near by.

As he never called on me during the Q&A, I approached Mr. Foti after he stood by the back door while Mr. Ross was wrapping up the town hall meeting.

As I approached I said, “I am not going to touch you! I am a reporter and a USS LIBERTY supporter. We want Mr. Trump to sign an Executive Order establishing USS LIBERTY Remembrance Day” as I handed him three papers and media cameras moved in.

I moved away to return to my belongings and approached Mr. Foti with my I-Phone camera on. He smiled as he handed me his embossed Chief of Staff business card and quipped, “Don’t shoot darts at it” and added he would be in touch.

THIS AMERICAN REPORTER reaches out NOW to ask U.S. Representative Dennis Ross, of Florida’s District 15 for a simple YES or NO:

Will U.S. Representative Dennis A. Ross support establishing every June 8 to be known as USS LIBERTY REMEMBRANCE DAY?