#AskNetanyahu went viral within moments after Prime Minister Netanyahu asked for it!

#AskNetanyahu  backfired as a PR stunt for which I am very grateful for it enabled this article which includes my Letter to the New York Times, following my TWEET at Prime Minister Netanyahu: 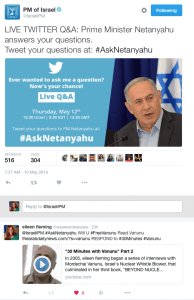 In 2005, I was just an American in Jerusalem in the midst of writing my first fiction, when I met Mordechai Vanunu and we began a series of interviews.

I became a reporter because Vanunu told me:

“The French were responsible for the actual building of the Dimona. The Germans gave the money; they were feeling guilty for the Holocaust, and tried to pay their way out….

“Nixon stopped the inspections and agreed to ignore the situation. As a result, Israel increased production. In 1986, there were over two hundred bombs. Today, they may have enough plutonium for ten bombs a year.” – Beyond Nuclear: Mordechai Vanunu’s Freedom of Speech Trial and My Life as a Muckraker 2005-2010
When I last saw Vanunu in 2013, he told me a CNN reporter had recently asked him for an interview but Vanunu said “NO, because everything is already on the internet.”

My first two questions to Vanunu

Thank you for consideration,